Michael Hastings was an investigative journalist whose exposes revealed corruption in the MICC. His piece on General Stanley McChrystal led to his resignation.[1]

Hastings investigated the US MICC.

Hastings’s 2010 article for Rolling Stone showed Stanley McChrystal's dislike of the Obama administration. But in addition it drew on McChrystal’s former role as the commander of Joint Special Operations Command, a covert unit whose operations were routinely resulting in scores of civilian deaths.[3]

Hastings was driving his Mercedes when he was killed in a one vehicle car crash.[4] He had already expressed concern that his car was being tampered with.[5] Russ Baker put it, the car "suddenly sped up, veered off the road, jumped the median, and crashed into a tree, exploding into flames with such violence that the engine was sent flying more than a hundred feet from the chassis."[6] Mercedes showed no interest in recalling the car, and the us commercially-controlled media has showed little interest in investigating the matter.[6]

The remains of his body were cremated without prior consent of the family.[7][8]

While some focus was given to american intelligence as the likely culprit,[9][10][11][12][13] especially over his recent investigation of John Brennan,[14][15] an article at occupy.com speculates that his accident could have been set up by private contractors.[16] 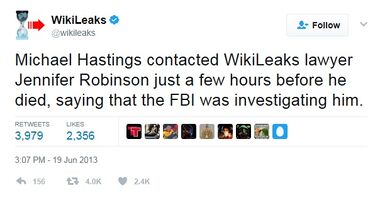 Michael Hastings contacted Wikileaks lawyer Jennifer Robinson just a few hours before he died, saying that the FBI was investigating him.[17]

Global Research wrote in 2017 that "The WikiLeaks/Vault 7 dump strengthens the case against John Brennan, the CIA director that Stratfor stated was on a witch hunt against journalists when Rolling Stone reporter Michael Hastings was suspiciously killed after his late model car was almost certainly remote controlled to speed up to near 100 MPH prior to it exploding in June 2013."[18]

A Quote by Michael Hastings