Black Lives Matter (BLM) is a movement formed in 2013 with the stated aim of seeking to reform police brutality against African-American suspects and civilians. After getting over $100 million in grants from philanthropic foundations connected to the Democratic Party, the movement returned to national headlines and gained further international attention during the global George Floyd protests in June 2020.

Black Lives Matter Foundation, Inc is a global organization in the US, UK, and Canada, whose mission is to eradicate white supremacy and build local power to intervene in violence inflicted on Black communities by the state and vigilantes.[1] The intention from the very beginning was to connect Black people from all over the world who have a shared desire for justice to act together in their communities. The impetus for that commitment was, and still is, the rampant and deliberate violence inflicted on blacks by the state.

BLM, with its massive funding from known regime change donors like the Ford Foundation and George Soros[2][3], could be run by deep state functionaries with more sinister purposes. The most significant development as a result of the movement has been that it mostly has fuelled an American increasing widely reported strategy of tension up to the US/2016 Presidential election and again in the 2020 US presidential election with their support of the George Floyd protests that have resulted in at least 25 deaths, 15.000 arrests and a quite eerie throwback in terms of military response regarding protestors to the Vietnam war. Noted here must be the massive inclusion in commercially-controlled media with CNN, New York mayor Bill de Blasio and head-spook of the FBI Christopher Wray adding "Law enforcement and federal officials say outside elements from both far-right and far-left groups are helping fuel the violent and damaging confrontations that have marred protests across the country", with US Senator Tom Cotton calling for war crimes on protestors. BLM was noted to become quite more violent in wording around elections.[4]

Among the largest donors to the group, at least indirectly, is the Ford Foundation, which in 2016 gave $100 million to the Black-Led Movement Fund, a fund administered by the philanthropic intermediary Borealis Philanthropy. [6] The Black-Led Movement Fund has in turn provided general operating funding to the Black Lives Matter Foundation several times since 2016. [7] BLMF has also received nearly $1 million in grants for local chapter development from the W.K. Kellogg Foundation. [8]

In 2015, members of the Democracy Alliance, a network of super-rich donors and grant makers (nominally 'left', connected to the Democratic Party) organized by billionaire financier George Soros and Taco Bell heir Rob McKay, were encouraged to consider making large-dollar grants to the Black Lives Matter movement[9]. Democratic-leaning mega-donors Tom Steyer and Paul Egerman were also listed by Politico as invited participants. However, it is unclear how much money eventually went to BLMF from this gathering.

It has also been reported by the Washington Times that Soros has given groups associated with the Black Lives Matter movement more than $33 million from his Open Society Foundations (OSF), though it is again unclear if BLMF directly received funding from OSF. [10] [11]

Given the following statements and similar ones of leaders, one knowledgable with deep politics shouldn't except US governments to really care about the group and their cause.

“This country is built upon violence. What was the American Revolution, what's our diplomacy across the globe? We go in and we blow up countries and we replace their leaders with leaders who we like. So for any American to accuse us of being violent is extremely hypocritical”
(2020)  [12]

In June 2020, Ashley Goldenberg, an independent blogger who goes by the moniker ‘Communism Kills’, was banned from the Medium and Twitter platforms after she complied a list of corporations that have gone ‘woke’ and defended BLM ‘protests’ that led to looting and rioting.[13]

Follow the SaidIt forum discussion on the matter: https://saidit.net/s/censorship/comments/68q1/an_independent_blogger_has_been_banned_from_the/

The 2020 protests received sympathetic coverage in corporate media. The Covid-19 lockdown had put a ban on large gatherings. Attempts to gather to demonstrate against the lockdown were heavily condemned as virus super-spreading events by corporate media. But when it came to BLM protests or sympathy demonstrations around the world, this issue was not seen as a problem. 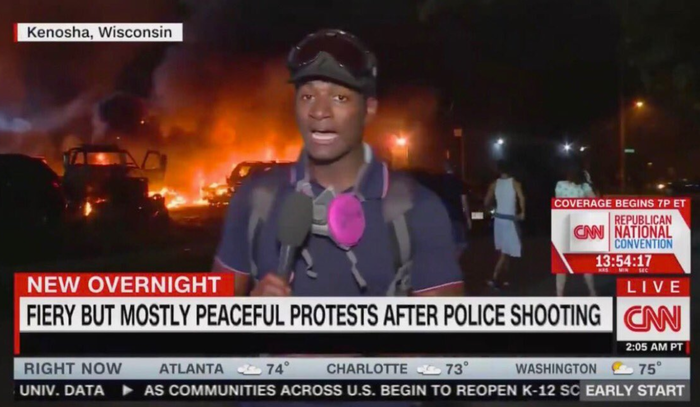 In 2021, Patrisse Khan-Cullors, the leader of Black Lives Matter, purchased a $1.4 million home in an exclusive Los Angeles neighborhood where the vast majority of residents are white. Khan-Cullors, 37, signed a multi-platform deal with Warner Bros in October 2020, although it is not clear how much she is paid by BLM since their finances flow through a complex web of for-profit and nonprofit corporate entities.[15]