Paul Burnham Finney was a US deep state functionary and editor listed as the "HONORARY SECRETARY GENERAL FOR THE UNITED STATES" in the reported of the 1981 Bilderberg.[1] 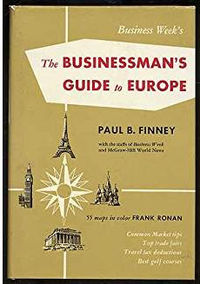 "At Businessweek, Mr. Finney served as the London correspondent and assistant managing editor before being appointed, at 35, managing editor. He was at the time the youngest person to have held the position. He wrote two books, The Businessman’s Guide to Europe, published in 1965, and The American Express Business Traveler’s Guide, from 1988. Mr. Finney served on the Council on Foreign Relations and was a member of the Harvard Club. From 1968 to 1982, he was a frequent invitee to the annual Bilderberg conference, designed to foster dialogue between Europe and North America. In 1981, he served as the conference’s honorary secretary general for the United States. Mr. Finney’s travel writing, business acumen, and knowledge of world affairs earned him columns in The New York Times and Travel and Leisure. He was a frequent contributor to Condé Nast Traveler, Frequent Flyer, The Robb Report, and Porthole."[2]