Not to be confused with Ian Henderson of the OPCW

Ian Henderson was a British citizen best known for his use of torture to put down the Mau Mau Uprising in Kenya, and later the 1990s Uprising in Bahrain as an employee of the Bahraini government.[1]

Wikipedia introduces Henderson as "a British citizen known for his role in resolving the Mau Mau crisis in Kenya in the late 1950s and also for managing the security forces in Bahrain during many years as an adviser to the Bahrain Government.

He has been described as the "Butcher of Bahrain" by various journalists and commentators because of persistent, widespread and credible allegations of torture from his times in both Kenya and Bahrain.[2] A 2002 article in The Guardian reported that "during this time his men allegedly detained and tortured thousands of anti-government activists”; his official acts “included the ransacking of villages, sadistic sexual abuse and using power drills to maim prisoners”; and “on many occasions they are said to have detained children without informing their parents, only to return them months later in body bags.”[3]

Ian Henderson was born in Aberdeenshire, Scotland in 1927 but lived most of his life overseas.[4] He was a Colonial Police Officer in Kenya during the 1950s and was famed for his role in capturing Mau Mau rebel leader Dedan Kimathi, which he wrote a book on, with the title "The Hunt for Kimathi",[5] also published under the title "Man Hunt in Kenya" by Doubleday.[6] In 1954 Henderson was awarded the George Medal, the highest award for bravery to non-military personnel, and later the Bar to the George Medal, for suppressing the Mau Mau Uprising. When he left Kenya in 1957, General Sir Gerald Lathbury wrote:

"Ian Henderson has probably done more than any single individual to bring the Emergency to an end."[7]

After independence, Henderson was deported from Kenya and moved to Bahrain. He was employed as the head of the General Directorate for State Security Investigations in Bahrain for some 30 years, retiring from his position in February 1998.[8] He was accused of complicity in torture during the period of protracted social unrest that Bahrain experienced in the mid to late 1990s, leading to an investigation by British authorities in 2000.[9] The investigation was concluded in August 2001 and no charges were filed.[10] He always denied any involvement in torture. 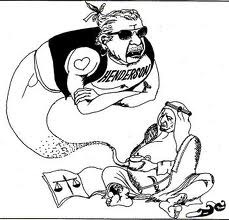 A cartoon from an underground Bahraini opposition publication showing Henderson as the Genie of the Bahraini ruler Shaikh Isa ibn Salman Al Khalifah.

Ian Henderson has been accused by political dissidents and international human rights agencies (including Amnesty International[16] and Human Rights Watch[17]) of torturing Bahrainis while being employed as the head of state security in Bahrain for some 30 years. The political dissidents alleged that the torture was committed as a means to stamp out the opposition movement in Bahrain that called for the restoration of democracy. Ian Henderson retired from his position in February 1998 and these allegations were the subject of an investigation by the UK government. The Bahrain Government has always denied his, and its own, involvement in torture and as a result, Ian Henderson has never been charged. The Bahrain Government, because of an edict issued by King Hamad bin Isa al-Khalifa, grants amnesty to human rights abuses committed by any Government officials prior to 2001.

The question of the British Foreign Office's complicity in the torture has been raised in the UK Parliament several times. At a parliamentary session on 3 June 1997, MP George Galloway described Ian Henderson as "Britain's Klaus Barbie"[18]:

Henderson might have walked from the fevered pages of a Graham Greene novel. He was an interrogator of the Mau Mau during colonial rule in Kenya in the bitter struggle for independence. So brutally efficient were his methods that, on obtaining independence for Kenya, Jomo Kenyatta tried to re-engage him in his own security apparatus. So notorious was Henderson that a demonstration was mounted by his victims and the whole affair became so scandalous that Kenyatta was forced to deport him. Via Ian Smith's Rhodesia, he ended up as the right hand man of the Al-Khalifa.

In the Arab states of the Persian Gulf, Henderson is known as the butcher of Bahrain. He is the head of the security services and director of intelligence and has gathered around him the kind of British dogs of war, mercenaries, whose guns and electric shock equipment are for hire to anyone who will pay the price.

In September 1997, the European Parliament passed a resolution condemning the use of torture in Bahrain,[19] and called on Britain to order Henderson to leave the country.[20]

In an interview published in the Sunday Herald on 21 November 1999, a Bahraini claiming to have been tortured by Henderson described the encounter:

"My first experience of Henderson took place in 1982 when I was hanged like a chicken at the office of Adel Flaifel, one of Henderson's henchmen.

"I was hanged by my arms and legs when Henderson entered the room and said: 'Do you want to confess?'. He immediately assaulted me in an immoral way and after a while he left the room."

Hassan said he was naked at the time and Henderson beat him over the buttocks. He went on: "The encounter lasted about 10 minutes during which I was in severe pain. The three torturers - Flaifel, Abdulla Al Tanak and Abdulla Al Dowsari - stopped when he entered the room awaiting further instructions from him, but upon receiving satisfactory approval from him, they resumed their beating.[21]

In Kenya, Henderson was known as the "torturer-in chief" and "was the prime mover in the preparation of bogus evidence in the 1953 trial at Kapenguria"[22] during the Mau Mau uprising.