In 2005, an attack in London stepped up the "war on terror". It was attributed to "Islamic terrorists", but the official narrative was not subjected to much scrutiny by the UK commercially-controlled media and UK Prime Minister Tony Blair refused to have an enquiry, terming the idea a "ludicrous diversion".[1]

Symantec suggest that the Stuxnet virus produced by the NSA and Unit 8200 may have been in the wild already by 2005. This was designed to cripple the Iranian nuclear refinement project. It escaped into the wild and infected millions of computers.[2] 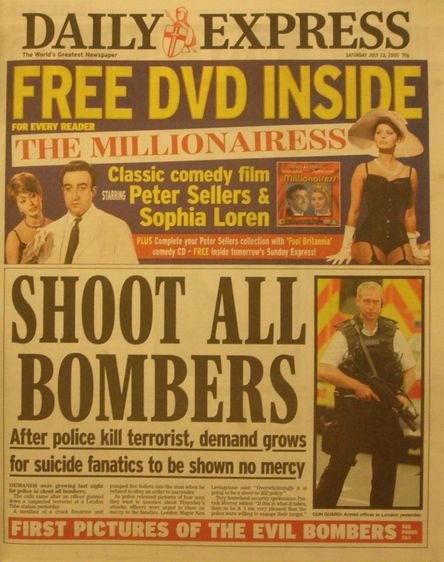 The 7/7 bombings in London were 4 separate explosions, which killed a total of 56 people. At the time it was widely believed to be, as the commercially-controlled media presented it, a bombing with the "hallmarks of Al-Qaeda". A range of inconsistencies such as a flawed official narrative, missing CCTV, parallel drills, obfuscation by the investigation/cover-up combine to suggest that the truth is not as simple, and threat the bombers were, at least well known to MI5. The bombings were cited in 2006 by the UK ambassador to Saudi Arabia, who warned that "British lives on British streets" were at risk if the Serious Fraud Office's investigation into the Al-Yamamah arms deal continued. The memo asked: "If this caused another 7/7, how could we say our investigation is more important?".[3]

Later in July 2005, an officer from the UK Metropolitan Police shot and killed Jean Charles de Menezes. The commercially-controlled media disseminated a fake version of how this happened, prompting Lana Vandenberghe from the Independent Police Complaints Commission‎ to become a whistleblower and leak a document to the press. Vandenberghe was sacked by the IPCC. It remains unknown whether Jean Charles de Menezes' murder was a tragic accident, or whether it was a planned deep event.

In November 2005, MI6 operative Harold Elletson chaired the 1st International Forum on E-Learning for Defence, Security and Emergency Services, a conference addressing the purported dangers of "terrorism". This was the first of 8 such conferences, some of whom involved speakers who would later join Elletson in the Institute for Statecraft.