Mark Howard Gorton[1] is a businessman whose research into deep politics was published on Gawker in 2014.

Gorton studied Electrical Engineering at Yale University, and then Stanford University,[2] and got an MBA from Harvard University. He began his career as an electrical engineer for Martin Marietta (now part of Lockheed Martin), and, following his interests in business, entered the world of fixed-income trading at Credit Suisse First Boston where he worked for 4½ years in the proprietary tradinged by department [2] prior to launching his Lime Group of companies, which include LimeWire,[3] a peer-to-peer file sharing client, Lime Brokerage (a stock brokerage), Tower Research Capital LLC[2] (a hedge fund), and LimeMedical LLC (a medical software company). He was a key figure in Arista Records LLC v. Lime Group LLC.[4] 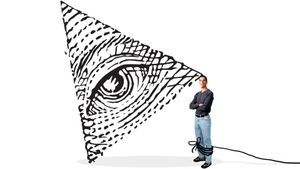 In 2006 he took a "passing interest" in the JFK assassination and has gradually become more and more active in this regard, as he traced consequent events through history. He is now an active researcher into deep politics. On the 50th anniversary of the assassination he sent his remarkable Document:Fifty Years of the Deep State out to his employees in Tower Research capital, and it was published together with two other incomplete essays on Gawker in 2014.[5]

Mark Gorton has advanced a theory that the perpetrators of the JFK assassination formed a group which is still in active operation, which he terms "the Cabal". He suggests that not only is this Cabal a potent force in US politics but that that they continue to commit high crimes such as election fraud or mass murder as well as using assassination to remove their opponents and those who try to publicise their existence. In 2014 Gorton expressed fears that his life might be in danger because of the publication of his research about this cabal:

"Having these [below] documents suddenly appear on a blog like Gawker changes my risk profile in life. That being said, I do think that the truth needs to be told about what has happened to our democracy."[6]

As of 2019, he was producing a documentary about some of the US Deep state's assassinations of the 1960s: JFK, RFK, MLK and Malcolm X.[7]

Gorton proposes that corruption in the US government is so widespread that a South African style truth commission is needed, in which earlier wrong doers make complete and full confessions of their past crimes in return for an amnesty from future prosecution.

“I am dedicated to recovering the good America that lives within the hearts of most Americans. Only when we recognize the errors of the past, can we see many of those same flaws in our society today and work to fix them.”
Mark Gorton (2013)  [8]