William H. "Bill" Gates is the founder of Microsoft, which created Windows, and dominated the computer operating system market, making him the world's 2nd richest person, after Amazon's Jeff Bezos. He was reported in 2021 to have been "very close" to Jeffrey Epstein.[1]

Gates has investments in Big chemical, Big pharma and biotech, including military research of all sorts. He uses a tax-free foundation, the Bill & Melinda Gates Foundation, for his "philanthropic" activities bestowing large grants to groups including the WHO, research institutions, and charitable groups, leading to accusations of undue influence. Since the COVID-19 Pandemic, he has given many interviews in which he has called for an aggressive project to develop and rollout a COVID-19 Vaccine. This is the most recent manifestation of a repeating pattern - apocalyptic predictions used to justify mass purchase of vaccines by governments to stave off disaster.[2]

Bill gates was born to William Henry Gates, head of the eugenics group Planned Parenthood, which promotes abortion and population reduction.[3] As an adolescent, Bill Gates was given a lot of access to computers at a time when they were very expensive and rare, leading to his skill as a computer programmer.
Salon wrote around 2000 about him:

“Bill Gates: Founder and current chairman of Microsoft. Depending on who you talk to, he's either one of the greatest businessmen who has ever lived or a double-dealing blackguard who epitomizes the worst evils of capitalism. Or both.”
Salon [4]

Gates was associated with Epstein both before[5][6] and after Epstein's 2008 conviction for child sex offences.[7][8] He instructed a team to meet Epstein at his townhouse to discuss "philanthropic" fundraising.[9] In an e-mail at the time he wrote that Epstein's "lifestyle is very different and kind of intriguing although it would not work for me" - which in 2019 he tried to play down through a spokesperson.[10] Boris Nikolic, a science advisor for the Gates foundation, was named as a fallback executor to Epstein's will.[11] These ties (and possibly others) may have made Gates vulnerable to sexual blackmail operations and/or media smear campaigns.

Bill Gates secured a deal with IBM to provide a closed source operating system for their PCs. First DOS, then Windows netted billions of dollars. As graphics capabilities improved, Microsoft Windows came to dominate the PC operating system market just as it massively increased in volume.

As head of Microsoft, Gates has been described as dissing his employees in a cruel and sarcastic way, screaming for an hour or so,[12] having no problem calling them stupid or idiot when he wasn't thinking highly of them. This happened frequently during meetings.[13] Paul Allen, in his memoir, writes that Gates seemed to thrive on conflict, always pressed for [his] advantage, and even schemed to dilute Allen's stake in the company when Allen was ill with Hodgkin's disease. "I'd assumed that our partnership would be a 50-50 proposition. But Bill had another idea," Allen writes. "I'd been taught that a deal was a deal and your word was your bond. Bill was more flexible."[14] 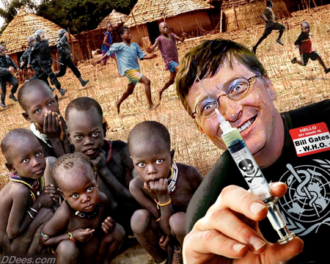 A graphic by Dave Dees highlighting concerns about the Bill & Melinda Gates Foundation's vaccination projects. The theme in this picture has been the topic of short documentaries as well.[15] 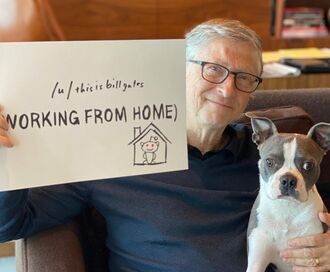 Bill Gates working from home while breadlines are forming in the US and people are starving at an increased rate in poorer countries.[16][17][18][19]

B.Gates statements to the effect, that vaccines are the best investment he has ever made, was widely reported by commercially-controlled media.[20][21][22][23][24][25][26][27] The Bill & Melinda Gates Foundation, through an AFP "fact-check", later clarified that this means that the health benefits for people is the return-of-investment that he speaks about.[28][29]

“When we talk about return on investment (ROI) for vaccines, we mean lives saved and economic growth for the areas where the vaccines are made available,”

However, it should be pointed out that there is a return-on-investment for the foundation as well, since it's net worth is increasing significantly year after year.

According to Astrid Stuckelberger[30][31] who was heard at the Corona Investigative Committee at the end of February 2021,[32][33][34] Bill Gates, due to his substantial funding of the organisation requested to be recognised as part of the executive board of WHO like a member state. This was in 2017, according to information that was related to her from people that still work with the organisation in Switzerland, and would have happened most likely through GAVI, which has the status of: "independent international institution" since 2009.[35]

A 2017 Politico article, Meet the world’s most powerful doctor: Bill Gates, begins with:[36]

"Some billionaires are satisfied with buying themselves an island. Bill Gates got a United Nations health agency in Geneva."

and later adds what a Geneva based representative of an NGO had to say about him:

"He is treated liked a head of state, not only at the WHO, but also at the G20,"

Gates has provided the farmers of the Third World with transgenic Monsanto seeds.[38]

According to statements of financial interests, Professor David Keith, of Harvard University receives an undisclosed sum from Bill Gates each year, and is the president and majority owner of the geoengineering company Carbon Engineering, in which both Gates and (tar sands magnate) Murray Edwards have major stakes – believed to be together worth over $10m. [39][40][41]

In an "Ask Me Anything" on Reddit in March 2020, Gates stated that "we will need some digital certificates to show who has recovered or been tested (for COVID-19) recently, or when we have a vaccine, who has received it." The "digital certificate" he refers to aligns with the focus of the ID2020 project, combining as it does vaccines with mandatory taking of biometrics ID. In a TED interview soon thereafter:

“Eventually what we’ll have to have is certificates of who’s a recovered person, who’s a vaccinated person […] Because you don’t want people moving around the world where you’ll have some countries that won’t have it under control, sadly. You don’t want to completely block off the ability for people to go there and come back and move around. So eventually there will be this digital immunity proof that will help facilitate the global reopening up.”
Bill Gates (24 March 2020)  [42]

The last sentence was edited out of the video retroactively, according to Off Guardian sometime on the afternoon of March 31.[43]

Gates has expressed interest in EarthNow, a plan to offer real-time video view of planet earth from a network of satellites.[44]

Who is Bill Gates?

In May 2020, James Corbett produced an acclaimed four-part investigation titled "Who is Bill Gates?"[46]

“First, we've got population. The world today has 6.8 billion people. That's headed up to about nine billion. Now, if we do a really great job on new vaccines, health care, reproductive health services, we could lower that by, perhaps, 10 or 15 percent.”
Bill Gates,  Innovating to zero TED talk (February, 18 2010)  [51]

Bill Gates may have spoken about the golden billion in previous years, but this has been scrubbed from the Internet according to Mark Crispin Miller.[52]

“One of the questions I get asked the most these days is when the world will be able to go back to the way things were in December before the coronavirus pandemic. My answer is always the same: when we have an almost perfect drug to treat COVID-19, or when almost every person on the planet has been vaccinated against coronavirus.”
Bill Gates (April, 30 2020)  [53]

“[...] then the second time that I saw him (Trump) was, ah, the March after that, ah, so March 2017 in the White House. In both of those two meetings, he asked me if vaccines weren't a bad thing, because he was considering a comission, to look into, ah, ill effects of vaccines and, and somebody, his name is Robert Kennedy junior, was advising them that vaccines were causing bad things. And I said no that's a dead end, that would be a bad thing don't do that [... ]”
Bill Gates (2018)  [56]

“The closer you get to [government] and see how the sausage is made, the more you go, oh my God! These guys don’t even actually know the budget. . . . The idea that all these people are going to vote and have an opinion about subjects that are increasingly complex — where what seems, you might think . . . the easy answer [is] not the real answer. It’s a very interesting problem. Do democracies faced with these current problems do these things well?”
Bill Gates (2013)  [57]