Philip Marshall was a CIA-connected pilot who flew for Barry Seal as part of "Iran-Contra". He published two popular and insightful books on 9-11 and one about the time when he worked for Barry Seal. He was in contact with senator Bob Graham and sending early versions of a new book about 9-11 to him,[citation needed] when on 2 February 2013 he was found shot dead, along with his children and dog.

“As a former operative in this group’s notorious covert missions, including Iran-Contra and the sting of Pablo Escobar, I recognized that this smoke rising over Manhattan might add a major piece to my large jigsaw puzzle of evidence.”
Philip Marshall [1]

Marshall was a "conspiracy theorist"[2] who had had a "messy split"[3] from his wife, was under pressure and committed suicide, murdering his children. He has no page on Wikipedia.

“Friends and neighbors who knew Marshall had trouble believing he would have taken the life of his children. He was known as a good father, well-liked Little League coach, former pilot for Eastern and United Airlines and an easygoing guy with a good sense of humor.

“The actions don’t match the person we know,” said Merita Callaway, a county supervisor who lives four doors up the street from Marshall. She considered him a good friend. “I can’t tell you how many times we’ve had conversations over a cup of coffee together.”

“He was a wonderful man,” said Carolyn Greenwood, who is Marshall’s nextdoor neighbor and who has known him for more than 10 years. “I knew him long enough to know he was a regular guy. He was a good father, always there for his kids and a helpful neighbor.”

Various commentators, including Kevin Barrett,[5] Wayne Madsen,[6][7]Dan Hennen,[8] Greg Ford[9][10] and Greg Fernandez[11] have suggested that he was murdered because he was exposing details of illegal activities by the cabal.[12]

At age 15 Philip Marshall learned to fly from his father.[6] He became a CIA-connected pilot who flew for Barry Seal[13] took part in and a DEA sting operation against Colombian drug lord Pablo Escobar.[14] 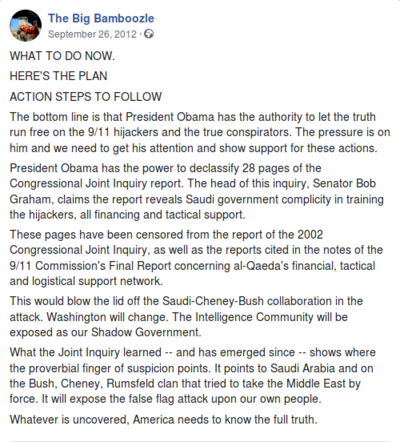 Even before 9/11, Marshall is reported to have had “a sick feeling that America was in deep trouble, that a group, this new Bush Administration, just like the old Bush Administration, was an incredibly dangerous, brazen bunch of well-connected, well-educated ideologists. They were on a power trip similar to others in world history, but as far as I knew this was the first attempt by what our founders had labeled domestic enemies to overthrow the Constitution and place America under their own absolute power.”[6]

Marshall was on the Coast to Coast show in September 2012, stating that the entire 9/11 episode was “a political stunt to favor the American shadow government that is currently doing business as the U.S. intelligence community.”,[15] he also stated: “The true reason the attack was successful is because of an inside military stand-down and a coordinated training operation that prepared the hijackers to fly heavy commercial airliners. We have dozens of FBI documents to prove that this flight training was conducted California, Florida and Arizona in the 18 months leading up to the attack.”[16] He had said to his friends -his private very close friends- and also to some members of the 9/11 community that he was worried that his family would be targeted by government agents and might face repercussions for his own activism and his outspoken opposition in challenging the official story on 9/11.[17][18] 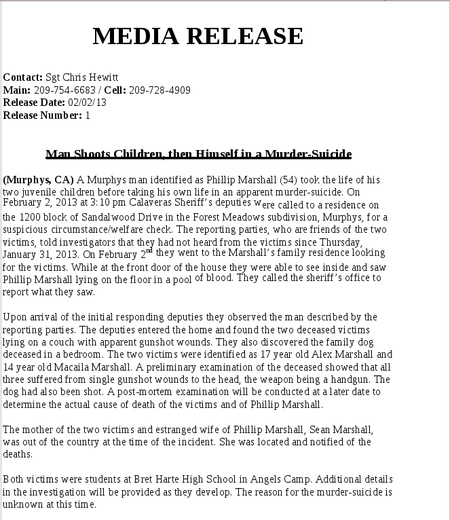 Marshall was found shot dead, along with his children, and this was presented as a murder/suicide.[12][6]

Journalist Chris Bollyn suggests that Philip Marshall was killed because of his inside knowledge of drug trafficking by the Mossad, the Bush Family and the Clinton Family, and that these groups effectively took over the Medellin Cartel. Bollyn observes that as of March 2016, paperback copies of Philip Marshall's last book, Lakefront Airport were selling for over $500 each, that it closely re-tells the author's own experience, and that Marshall was planning a fourth book when he was killed.[13]

Wayne Madsen spent a week in the area investigating and observing that "the crime scene was illegally and surreptitiously cleaned up by professionals", he learned that the the local sheriff called a county official on Saturday night (2. Feb) and asked if a cleaning crew can be found that is willing to clean the house, that would have been still a crime scene, on the weekend - which was the day of the Super Bowl of that year, reaching the conclusion that this was a murder suicide immediately. In the following days SUVs from out of state, some even with an array of communication antennas where parked near the house and people were searching the inside and outside, even at night.[20][21] Madsen stated that it was an assassination motivated either by revenge for Marshall's disclosures about 9/11 or concern to prevent more such revelations.[22]

Daniel Hopsicker does take the stand that there is no conspiracy and that it was indeed a murder suicide as reported.[23]

Ian Henshall pointed out that Rebekah Roth appeared after the death of Philip Marshall as is as a replacement "whistleblower".[24]

As of September 2019, Philip Marshall had two Amazon author pages:[25]