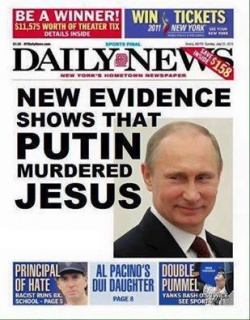 
Wikispooks Comment What is the root cause of the increasingly egregious falsehoods uttered by senior western politicians on matters of geopolitics? This article is a satirical treatment of that question in the matter of Vladimir Putin's surprise 15 March 2016 announcement of a partial withdrawal of Russian forces from Syria and Philip Hammond's answer to a fawning question about it in the UK House of Commons. As a practising Christian, its author naturally chooses the most charitable - though perhaps the least plausible of the possibilities: Stupidity

For some time I’ve been trying to develop an all-encompassing theory to account for the behaviour of Western leaders and the media over the last few years. At times their actions and the words of many of them have appeared to be, shall we say, unhinged.

But it was only when I heard what the British Foreign Secretary, Philip Hammond, had to say in the House of Commons on 14th March that the penny finally dropped for me and my all-encompassing theory was finally settled. He was answering a leading question on the Russian withdrawal announcement from Syria, put to him by one of those servile members of the so-called Conservative Party who clearly sees his job as being the asker of leading questions, rather than calling the Government to account. Here’s Mr Hammond’s reply:

“Somebody goes in to another country, starts bombing civilian populations, destroying hospitals and schools. If they decide they have done enough, let’s not give them too much praise. It’s a bit like ‘did he stop beating his wife’. The fact they are there in the first place is something we have to continually protest about. We certainly should not give them any credit for simply withdrawing from these illegal activities.”

What is wrong with this statement? The word everything springs to mind. Firstly, although Western leaders have consistently said that Russian airstrikes were targeting schools and hospitals, often drawing on the Coventry-based one-man-band known as the Syrian Observatory for Human Rights for proof, we now know from a leaked Nato memo that privately they were impressed at the accuracy and efficacy of the Russian strikes.

Secondly, this is the same Mr Hammond who voted in favour of the war against Iraq, who is part of a Government which dismembered the state of Libya, and who has consistently supported the so-called “moderate rebels” in Syria. His bleeding heart humanitarianism is therefore more than a tad nauseating and to paraphrase his own analogy, it’s a bit like a wife-beater getting upset over someone shouting at their wife.

And finally, there’s that bit about Russian activities being illegal. Of course they were the opposite of illegal, since they were done at the request of the Government of the sovereign state of Syria. Mr Hammond wouldn’t understand that, of course, since he is part of a Government that despises the idea of national sovereignty and has consistently meddled in the affairs of sovereign states, which pose no threat whatsoever to Britain. British bombing in Syria was illegal, and for Mr Hammond to accuse the Russian campaign of being illegal is a stunning display of selling a falsehood as the truth.

But you might wonder why his speech gave me the answer to my search for an all-encompassing theory to explain the policies, words and actions of Western leaders, and what that all-encompassing theory is. The answer to the first part is this: Mr Hammond’s words were so utterly, mind-numbingly stupid, that it became clear to me that there must be much more to it than meets the eye. Surely no-one in such a position could voluntarily come out with such trash and expect anyone to believe it, could they? Yet the fact that he clearly did expect people to believe such an unhinged and false statement, solved the mystery of what is going on.

Isn’t it obvious that the whole thing has the "Hand of Putin" all over it? Isn’t it clear that Putin has been Weaponising Stupidity itself? And wouldn’t that explain all the other instances of stupid behaviour we have witnessed over the past few years?

But how, you say. Well let’s say that the Russians have invented some way of making people do or say really ignorant or stupid things — things that actually work against their interests and those of the people they lead. And suppose they have also discovered a way of putting it into capsule form. Well, Putin and members of the Russian Government have met with most high ranking Western leaders at various forums haven’t they? They’ve probably even had a cup of tea with most of them (emphasis on the word probably, which is a British legal term for certainly). How easy would it have been for them to slip a pill into their drink while they weren’t looking?

What about the media, though? Whilst the capsule explanation might explain the behaviour of a handful of politicians, they can’t have had tea with every Western journalist that writes stupid things about Russia or the Middle East can they? Of course not. But then if they have invented a way of Weaponising Stupidity, and if they have discovered the technology to put it into capsule form, who’s to say they can’t find a way of, say, pumping it into newspaper offices through the air-conditioning?

All well and good you might say, but it does beg a question: Why would Putin want to make Western leaders do and say stupid things? What benefit would he get out of Weaponising Stupidity? Again the answer is obvious, is it not? The more the leaders of Western countries and the media have displayed their folly and sheer ignorance, the more they have dragged their countries towards collapse. And since Putin’s goal is obviously to Weaponise the World, no doubt for his own dastardly reasons, you can begin to see how it would be in his interests to use Stupidity as a Weapon to achieve his aims. Can’t you?

Then again, I don’t want to be overly dogmatic about my new theory. I may be wrong. In fact, I still hold out the possibility that the truth might well be much simpler. It could just be a case that we really are run by ignorant buffoons who never learn, and even if Mr Putin were inclined to develop a way of Weaponising Stupidity, he’d actually be wasting his time.