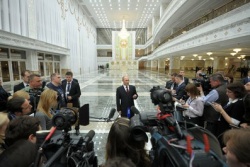 This short Q&A session is another good example of Putin's level-headed, calm, measured approach to complex and (from the Russian perspective) deeply vexatious issues. It begs the rhetorical question: is there ANY western politician - let alone head of state - that can measure up to him in both the above attributes and his personal authoritative mastery of geo-political affairs?

In comparison the west's political leaders - pretty much without exception - give every impression of soul-less marionettes mouthing the talking points provided by their hidden decision-making puppet-masters.

QUESTION: You have not reacted yet to the latest US and EU sanctions against Russia. How do you explain these sanctions and what impact do you think they might have on Eurasian integration?

PRESIDENT OF RUSSIA VLADIMIR PUTIN: They will not affect Eurasian integration at all. Only the countries actually carrying out this integration can affect it. Today we made a big step forward in our work. It is not always easy to reach agreement at the expert level on various matters of interest to the different negotiating parties, but today we have made real progress and we have every reason to expect that we will sign the agreement within the set timeframe. There are still some matters that need a little more work, but on the whole we have settled practically everything now.

As for the sanctions, I consider the first package of sanctions an unlawful and hostile act against Russia, and a step that will definitely damage Russia-US and Russia-EU relations. But as for the second package of sanctions, it is not even clear exactly what they are all about, because they have no cause and effect link to what is happening now in Ukraine and in Russia.

I think they are linked to the fact that our partners tried to settle the Ukrainian crisis using force, then realised what this leads to and are now looking for someone to blame. Let me say though that this has nothing to do with Russia. People say our special forces are present there, say we have sent instructors there. Let me say in all responsibility that there are no Russian instructors, special forces or troops of any kind there. We have no one there. They cooked up this whole mess themselves and are now trying to resolve the problem by using us.

Can the situation be resolved? It probably can, but this would require the parties to the conflict to sit down at the negotiating table and respect the Geneva agreements. This would mean that the authorities in Kiev would have to release from prison the people in whom Ukrainians have placed their trust and chosen as leaders, and would have to begin direct dialogue with these people. It would mean disarming the radicals, Right Sector and other radical groups, and clearing them out of buildings in Kiev rather than legalising their activities. It would mean equal respect too for the lawful rights of people in other parts of Ukraine, especially in the east and southeast of the country. Engaging in dialogue and looking for compromise solutions is something that must be done. The wrong thing to do is to start looking for scapegoats elsewhere.

You know, it was handing out those pies on the Maidan that paved the way to this crisis. We need to appreciate the seriousness of the situation and be equally serious about looking for solutions. Let me say again that there is nothing good in these sanctions – they will be damaging. The Russian Federation Government has already proposed some countermeasures. I do not see a need for us to take countermeasures, but if this kind of situation continues, of course we will have to start looking at who is doing what in Russia in different sectors of our economy, including the energy sector. We really have no desire to resort to these kinds of measures, take our own steps in response, and I hope that things do not reach this point.

QUESTION: How do you view the fact that the USA has taken the lead in the situation with Ukraine, pushing the EU into a background role?

VLADIMIR PUTIN: I think that what is happening now shows us just who was really directing this whole process right from the outset. Initially, the USA preferred to stay in the shadows, given that US interests converged to some extent with those of their European partners, seeing as the European Union, led by the European Commission, wanted to sign the agreements we know with Ukraine, agreements that I think did not offer advantageous terms for Ukraine. The former government attempted to resist this and do something about it, but as I said, the Western community decided to take another road and use force, bring about an anti-constitutional coup and armed seizure of power, and it seems they miscalculated as to what this would actually lead to. Some liked the idea, gave it their support, and probably a good number of people in Ukraine support it too, as we see. But more people do not like it and do not agree with this form of power. There is nothing democratic about it. These people’s views must be taken into account too, and their lawful rights respected. That the USA has now taken the lead in trying to settle the crisis suggests that it was they who headed the process from the start, but are only now stepping forward as the leaders in the whole thing.

QUESTION: A group of military observers was detained recently in Ukraine. Ukraine had invited these observers to the country and was supposed to guarantee their security. What is your view of this situation?

VLADIMIR PUTIN: There is nothing good here at all, neither in the fact that they were sent in this capacity, nor in their detention. If the Ukrainian government or those who call themselves the government in Kiev invited observers, all the more so military observers, as experienced people they should realise they are heading for a conflict zone, entering a region that does not recognise the legitimacy of the current authorities in Kiev, and they should have been aware of this and reached agreement with the people who are in control of the situation in those regions. They did not do this and therefore ended up in the situation we see today.

At the same time, we understand the concerns of our partners in Europe. I had a private meeting yesterday, met with the former German chancellor, Mr Schroeder, and he also expressed these concerns, given that a German citizen is among those who were detained. I hope that this conflict will be settled and that these people will be able to leave the region without hindrance, but everyone involved in this process should draw the according conclusions from what has happened and make sure to avoid any such mistakes in the future.

Thank you very much.