Robert Swan Mueller III is a US Deep state actor whom Daniel Hopsicker termed "clearly-dishonest".[1] He was appointed Director of the Federal Bureau of Investigation one week before 9-11, a job he kept until 4 September 2013. In May 2017, Mueller was appointed by Deputy Attorney General Rod Rosenstein as Special Counsel overseeing an ongoing investigation into alleged Russian interference in the 2016 United States presidential election and related matters.[2]

Mueller was born on August 7, 1944 in New York City, the son of Alice C. (née Truesdale) and Robert Swan Mueller.[3] His maternal great-grandfather was railroad executive William Truesdale. Mueller grew up outside of Philadelphia, Pennsylvania. A 1962 graduate of St Paul's School (Concord, New Hampshire), he went on to receive a Bachelor of Arts from Princeton University in 1966, an MA in International Relations from New York University in 1967, and a Juris Doctor from the University of Virginia School of Law in 1973.

Mueller joined the United States Marine Corps, where he served as an officer for three years, leading a rifle platoon of the 3rd Marine Division during the Vietnam War. He is a recipient of the Bronze Star Medal, two Navy Commendation Medals, the Purple Heart and the Vietnamese Cross of Gallantry.

Following his military service, Mueller continued his studies at the University of Virginia Law School, eventually serving on the Law Review. After receiving his Juris Doctor degree, Mueller worked as a litigator in San Francisco until 1976.

He then served for 12 years in United States Attorney offices. He first worked in the office of the US Attorney for the Northern District of California in San Francisco, where he rose to be chief of the criminal division, and in 1982, he moved to Boston to work in the office of the US District Court for Massachusetts as Assistant US Attorney, where he investigated and prosecuted major financial fraud, "terrorism" and public corruption cases, as well as narcotics conspiracies and international money launderers.

After serving as a partner at the Boston law firm of Hill and Barlow, Mueller returned to government service. In 1989, he served in the US Justice Department as an assistant to US Attorney General, Dick Thornburgh. The following year he took charge of its criminal division. During his tenure, he oversaw prosecutions that included Panamanian leader Manuel Noriega, the Lockerbie bombing case, and the Gambino crime family boss John Gotti. In 1991, he was elected a fellow of the American College of Trial Lawyers.

In 1993, Mueller became a partner at Boston's Hale and Dorr, specializing in white-collar crime litigation. He returned to public service in 1995 as senior litigator in the homicide section of the District of Columbia United States Attorney's Office. In 1998, Mueller was named US Attorney for the Northern District of California and held that position until 2001.

Mueller was nominated for the position of FBI Director on July 5, 2001.[4]. After hearings, he served as Acting Deputy Attorney General of the United States Department of Justice for several months, before officially becoming the FBI Director on September 4, 2001, just one week before the September 11 attacks. On May 12, 2011 it was reported that President Obama had asked Director Mueller to continue at the helm of the FBI for another 2 years beyond his current term, set to expire on September 4, 2011.[5] The Senate approved this request on July 27, 2011.[6]

Director Mueller, along with Acting Attorney General James B Comey, offered to resign from office in March 2004 if the White House overruled a US Department of Justice finding that domestic wiretapping without a court warrant was unconstitutional.[7] Attorney General John D Ashcroft denied his consent to attempts by White House Chief of Staff Andrew Card and White House Counsel Alberto R Gonzales to waive the Justice Department ruling and permit the domestic warrantless eavesdropping program to proceed. On March 12, 2004, President George W Bush gave his support to changes in the program sufficient to satisfy the concerns of Mueller, Ashcroft and Comey.[8] The extent of the National Security Agency's domestic warrantless eavesdropping under the President's Surveillance Program is still largely unknown.

Three months after retiring, Mueller said he expected that more people would be charged over the Lockerbie bombing:

"We have FBI agents who are working full-time to track down every lead as we have since it occurred 25 years ago. My expectation is that continuously we will obtain additional information, perhaps additional witnesses and that others will be charged with their participation in this. We do not forget. And by that I mean the FBI, the Department of Justice, we do not forget."[9]

In 2013, Mueller said that the Lockerbie bombing probe was "still an open case".[10] 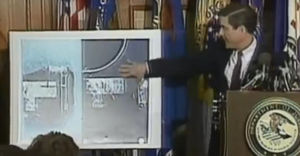 Robert Mueller was assistant attorney general in the United States in 1991 when indictments were issued for the two Libyan suspects, Abdelbaset al-Megrahi and Lamin Khalifah Fhimah. A young Mueller is explaining the importance of PT/35(b), a small fragment of a circuit timer that was allegedly found among the debris of Pan Am 103 near the town of Lockerbie. Today, we know that PT/35(b) is a forgery that was planted to blame Libya for the tragedy.[11]

According to Wikileaks, Robert Mueller intervened in the Lockerbie bombing case by writing to Scottish Justice Secretary, Kenny MacAskill on 20 August 2009:[12]

Over the years I have been a prosecutor, and recently as the Director of the FBI, I have made it a practice not to comment on the actions of other prosecutors, since only the prosecutor handling the case has all the facts and the law before him in reaching the appropriate decision.

Your decision to release Megrahi causes me to abandon that practice in this case. I do so because I am familiar with the facts, and the law, having been the Assistant Attorney General in charge of the investigation and indictment of Megrahi in 1991.

And I do so because I am outraged at your decision, blithely defended on the grounds of "compassion".

Your action in releasing Megrahi is as inexplicable as it is detrimental to the cause of justice. Indeed your action makes a mockery of the rule of law.

Your action gives comfort to terrorists around the world who now believe that regardless of the quality of the investigation, the conviction by jury after the defendant is given all due process, and sentence appropriate to the crime, the terrorist will be freed by one man's exercise of "compassion."

Your action rewards a terrorist even though he never admitted to his role in this act of mass murder and even though neither he nor the government of Libya ever disclosed the names and roles of others who were responsible.

Your action makes a mockery of the emotions, passions and pathos of all those affected by the Lockerbie tragedy: the medical personnel who first faced the horror of 270 bodies strewn in the fields around Lockerbie, and in the town of Lockerbie itself; the hundreds of volunteers who walked the fields of Lockerbie to retrieve any piece of debris related to the breakup of the plane; the hundreds of FBI agents and Scottish police who undertook an unprecedented global investigation to identify those responsible; the prosecutors who worked for years - in some cases a full career - to see justice done.

But most importantly, your action makes a mockery of the grief of the families who lost their own on December 21, 1988.

You could not have spent much time with the families, certainly not as much time as others involved in the investigation and prosecution.

You could not have visited the small wooden warehouse where the personal items of those who perished were gathered for identification - the single sneaker belonging to a teenager; the Syracuse sweatshirt never again to be worn by a college student returning home for the holidays; the toys in a suitcase of a businessman looking forward to spending Christmas with his wife and children.

You apparently made this decision without regard to the views of your partners in the investigation and prosecution of those responsible for the Lockerbie tragedy.

Although the FBI and Scottish police, and prosecutors in both countries, worked exceptionally closely to hold those responsible accountable, you never once sought our opinion, preferring to keep your own counsel and hiding behind opaque references to "the need for compassion."

You have given Megrahi a "jubilant welcome" in Tripoli, according to the reporting. Where, I ask, is the justice?

On 6 August 2009, The Times published a report containing the following:

"The investigating officers who led the original inquiry into the Lockerbie bombing have made an unprecedented intervention in the case to argue against the release of the Libyan convicted of the attack.

"In a letter to the Justice Secretary, Kenny MacAskill, the Scottish police chief and the FBI boss who led the international investigation 20 years ago launch a powerfully worded plea against the release of Abdelbaset al-Megrahi, who is serving a minimum sentence of 25 years for his part in the bombing.

"In the letter obtained by The Times, Stuart Henderson, the retired Senior Investigating Officer at the Lockerbie Incident Control Centre, and Richard Marquise, the FBI special agent in charge of the US taskforce, whose detective work helped to convict Abdelbaset al-Megrahi, insist that he is guilty. They also argue that his release would 'nullify the dedicated work of dozens of law enforcement and intelligence officials around the world'."

It is therefore untrue for the Director to suggest that the decision was taken without regard to, or in ignorance of, the views of the investigators (or at least some of them). His complaint (if he has one at all) therefore has to be that the ultimate decision was not one that they approved of.

In civilised countries decisions regarding liberation of prisoners are not placed in the hands of policemen and prosecutors, nor are they accorded a veto over those decisions. Mr Mueller (and Mr Marquise) would probably wish that this were otherwise. The rest of us can be grateful that it is not.[13]

Patrick Haseldine commented on Prof Black's blog: "FBI Director, Robert S Mueller, who boasts that he was Assistant Attorney General in charge of the investigation and indictment of Mr Megrahi in 1991, might find himself the subject of investigation when a United Nations Inquiry into the 1988 Lockerbie bombing is instituted in the coming months."[14]

This page imported content from Wikipedia on 2 April 2013.
Wikipedia is not affiliated with Wikispooks.   Original page source here
Retrieved from "https://wikispooks.com/w/index.php?title=Robert_Mueller&oldid=220447"
Categories: