Autism (a.k.a. Autism Spectrum Disorder) is a poorly understood, disabling medical condition which affects sufferers ability to relate to other people. A “staggeringly high” number of people with autism have been involved in the PREVENT programme, with several arrests of teenagers with autism.[1]

The CDC stated in 2017 defined ASD as "a developmental disability that is caused by differences in how the brain functions", and explained that "People with ASD may communicate, interact, behave, and learn in different ways". Their prevalence estimate was around 1.5% of US children.[2]

No connection to vaccines

The CDC has specifically disavowed this possibility; in 2017 it published a page entitled "Vaccines Do Not Cause Autism".[2] 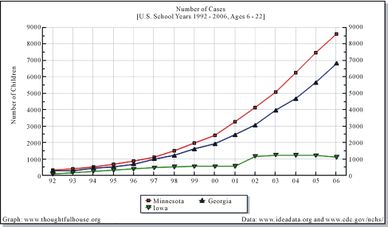 Males have higher autism rates than females. The incidence of autism has grown dramatically. A 2018 study suggested around 2.5% American children have autism, an increase over previous estimates.[3] Autism is highest in the "developed countries" such as US, Canada, Japan and Western Europe.[4]

The first scientific claim that autism could be linked to the MMR vaccine was made in 1998 by Andrew Wakefield and 12 colleagues. They published a paper in The Lancet which suggested that the MMR vaccine might predispose children to autism.[5]

“Autism Spectrum Disorder (ASD) rates around the world are skyrocketing for unknown reasons. Parents have fingered vaccines but studies have failed to confirm a link. Concurrently, aluminum, from vaccine adjuvants, has been found actively transported to the brains of animals inciting inflammation. Fluoride has been implicated in children’s brain dysfunction, and, fluoride has been shown to potentiate aluminum toxicity. No vaccine study to date has controlled for a practice widespread around the world – water fluoridation. Autism is more prevalent in United States cities that fluoridate their water supplies, and less prevalent in rural non-fluoridated areas even with high vaccination rates.”
Robert Jay Rowen (February 2017)  [6]

Wakefield's claim attracted widespread interest both in the medical profession and from the public at large, and lead to a falling of MMR vaccination rates in some areas.

The Lancet fully retracted Wakefield's paper in February 2010.[7] The British Medical Journal has alleged that Wakefield et al. were fraudulent[8][9] and that they were motivated by financial gain.[10]

At least two whistleblowers have testified to suppression of their testimony about an autism-vaccine link.

On August 27, 2014, a CDC researcher, Dr. William W. Thompson published a mea culpa, admitting that "my coauthors and I omitted statistically significant information in our 2004 article published in the journal Pediatrics."

In September 2018 Andrew Zimmerman signed an affidavit that stated that he believed that autism could be caused by vaccines in a small subset of children, and that after he had said as much to USDOJ lawyers in 2007 he had been fired.