The concept of transgenderism (also known as synthetic sex identities[1]) is the idea that there is a subgroup of humanity that are born in wrongly sexed bodies or wrongly being born in sexed bodies at all[2]. In practice, this means an encouragement of hormone injections, lifelong medication and radical surgery to change the body. Since the 2020s, transgender is an umbrella term.[3] 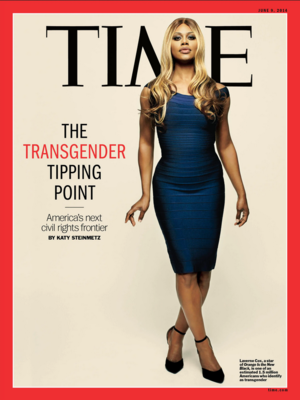 The 2014 TIME magazine front page that introduced the concept of transgender to the general population.

Wikipedia writes: "A transgender (often abbreviated as trans) person is someone whose gender identity or gender expression does not correspond with their sex assigned at birth. Many transgender people experience dysphoria, which they seek to alleviate through transitioning. often adopting a different name and set of pronouns in the process. Additionally, they may undergo sex reassignment therapies such as hormone therapy and sex reassignment surgery to more closely align their primary and secondary sex characteristics with their gender identity. Not all transgender people desire these treatments, however, and others may be unable to access them for financial or medical reasons. Those who do desire to medically transition to another sex may identify as transsexual. Transgenders are less than 1% of the world population".[4] As of 2016, 1.4 million people in the United States identify as transgender.[5]

Joe Biden said states shouldn't be able to restrict transgender surgery for children.[6] This was in a event broadcast on 23 October 2022 held by NowThis News.[7]

As all polarizing perspectives are designed to do, it moves people away from conciliation and common ground. "Alt-right" gurus often take the lead on opposition to transgenderism and other cultural issues, stealing focus away from exposure of and resistance to deep state power structures.[8]

The Cambridge Dictionary changed the definition of 'Man' and 'Woman' to reflect new realities at the end of 2022.[9] Change.org deleted a "hate speech" petition that defended the former dictionary definition of woman.[10]

The word "transgender" and the phrase "gender identity" didn’t enter the maintained cultural awareness with full force until 2014, even if the concepts have been hovering about on the edges of the LGB community for a bit longer.[11]

trans messaging (in the mainstream press and on social media) is far too sophisticated to be the work of a marginalized sexual minority that is dealing with a wide range of health issues (and other challenges) every day...To me, the incredible sophistication of the trans movement feels like the work of elite Pharma PR firms...
somehow, the trans movement, right out of the gate, was firing on all cylinders. The weaponized terms "cisgender" and "TERF"; the vast campaign to get people to put pronouns in their bios; the phrase "trans women are women"; the aggressive push into women’s sports; the repeated promotions of the completely incompetent Rachel Levine to ever-higher government posts; the ability to place stories at will in all mainstream media outlets; and the elaborate campaigns to "cancel" any critical discussion of these matters… that’s all extremely labor-intensive and expensive to pull off.[12]

Sports Illustrated, lauding Lia Thomas, a man winning a women’s sports competition, is owned by Authentic Brands. Authentic Brands Group was on the receiving end of an $875 million investment by BlackRock in 2019[13]. SI has now had four men posing as women on their covers.[14] 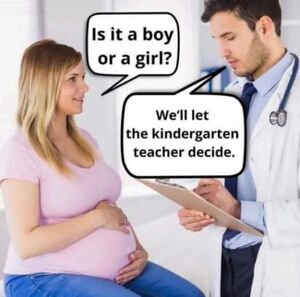 The factetious disorder imposed on another (FDIA), also called Munchausen syndrome by proxy (MSbP), is a condition in which a caregiver creates the appearance of health problems in another person, typically their child.[16] It is supected that a number, even a significant number of people who, due to their own underlying condition, would abuse their children in such a way, are now manipulating their children to turn them in for medical transgender "treatment".[17][18]

A UK physician who ran an exploratory psychotherapy service at the Portman Clinic, was worried about the practices of the Tavistock gender clinic. He describes situations in which parents of a three year old would come in and say they want a sex change simply because the child never looked like a boy or a girl.[19] In an interview he also points out that, because of his stand on the matter, the communication with gender identity clinics was "often passive aggressive in the form of non-communication", which is "very rare in mental health, which is generally a field where interdisciplinary communication is seen to be pivotal".[20]

Many questionable circumstances in the practices involved during "gender treatment" of children have let to the creation of the terminology: "Transhausen by proxy".[21][22]

Several studies[23] show that people with sexual dysphoria are significantly more likely to be autistic (and vice versa).. If autism is the result of injury from toxicants including vaccines, and autistic people are more likely to be trans, then it is also possible that sexual dysphoria is vaccine injury. If trans is a vaccine injury that would explain why the trans population is growing so rapidly. Like autism, there are few trans people in the oldest age groups but in the younger populations, 3% to 5% identify as trans or nonbinary[24][12].

Increasing trans identification could also be the result of the pesticide atrazine (that turns male tadpoles into females[25]). Or it could be that vaccines are contaminated with pesticide residues (including atrazine).

Theresa Deisher argues that using cells lines from aborted male and female fetuses to grow the antigens used in some vaccines could be wrecking havoc on sexual expression.[26]

The Chicago Pritzker family, one of the richest families in the United States, have stood behind a concerted push to promote transgenderism[1] through their philanthropic foundations.

A motivating and driving force behind the Pritzkers’ familywide commitment to transgenderism has been Jennifer (born James) Pritzker. In 2013, around the time gender ideology reached the level of mainstream American culture, Jennifer Pritzker announced a transition to womanhood.[27]

Pritzker has used the Tawani Foundation to help fund various institutions that support the concept of a spectrum of human sexes, including the Human Rights Campaign Foundation, the Williams Institute UCLA School of Law, the National Center for Transgender Equality, the Transgender Legal Defense and Education Fund, the American Civil Liberties Union, the Palm Military Center, the World Professional Association of Transgender Health (WPATH), and many others. Pritzker also helps fund the University of Minnesota National Center for Gender Spectrum Health. Pritzker’s philanthropy is also active in Canada, where Jennifer has helped fund the University of Toronto’s Bonham Centre for Sexual Diversity Studies.[1]

The Pritzkers have forged a close relationship with the psychiatric establishment. The Pritzker Department of Psychiatry and Behavioral Health at Lurie Children's Hospital was launched with a $15 million gift from the Pritzker Foundation in 2019[28]