From Wikispooks
(Redirected from Slate)
Jump to navigation Jump to search 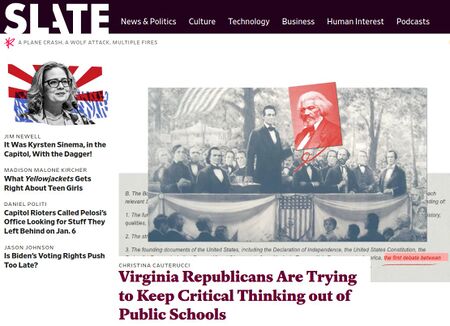 Slate is a "progressive" online magazine that covers current affairs, politics, and culture in the United States.

It was created in 1996 by former New Republic editor Michael Kinsley, initially under the ownership of Microsoft as part of MSN. In 2004, it was purchased by The Washington Post Company (later renamed the Graham Holdings Company), and since 2008 has been managed by The Slate Group, an online publishing entity created by Graham Holdings. Slate is based in New York City, with an additional office in Washington, D.C.[1]

Slate, which is updated throughout the day, covers politics, arts and culture, sports, and news. According to its former editor-in-chief Julia Turner, the magazine is "not fundamentally a breaking news source", but rather aimed at helping readers to "analyze and understand and interpret the world" with witty and entertaining writing. As of mid-2015, it publishes about 1,500 stories per month.

A French version, slate.fr, was launched in February 2009 by a group of four journalists, including Jean-Marie Colombani, Eric Leser, and economist Jacques Attali.

Since 2006, Slate has been known for publishing contrarian pieces arguing against commonly held views about a subject, giving rise to the #slatepitches Twitter hashtag in 2009. The Columbia Journalism Review has defined Slate pitches as "an idea that sounds wrong or counterintuitive proposed as though it were the tightest logic ever," and in explaining its success wrote "Readers want to click on Slate Pitches because they want to know what a writer could possibly say that would support their logic".

In 2014, Slate's then editor-in-chief Julia Turner acknowledged a reputation for counterintuitive arguments forms part of Slate's "distinctive" brand, but argued that the hashtag misrepresents the site's journalism. "We are not looking to argue that up is down and black is white for the sake of being contrarian against all logic or intellectual rigor. But journalism is more interesting when it surprises you either with the conclusions that it reaches or the ways that it reaches them."

In a 2019 article for the site, Slate contributor Daniel Engber reflected on the changes that had occurred on the site since he started writing for it 15 years previously. He suggested that its original worldview, influenced by its founder Kinsley and described by Engber as "feisty, surprising, debate-club centrist-by-default" and "liberal contrarianism", had shifted towards "a more reliable, left-wing slant", whilst still giving space for heterodox opinions, albeit "tempered by other, graver duties". He argued that this was necessary within the context of a "Manichean age of flagrant cruelty and corruption", although he also acknowledged that it could be "a troubling limitation".

This page imported content from Wikipedia on 15 January 2022.
Wikipedia is not affiliated with Wikispooks.   Original page source here