Japan is a group of islands off Asia. It is densely populated. After defeat in World War II, it was demilitarised and occupied by the US. In 2013, it was #7 in the world in terms of military expenditure[1] and has been aggressively re-militarising.

The US sent gunboats in 1853/4 to force Japan to open up to its business interests. 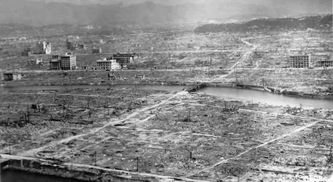 Hiroshima after the nuclear bombing

In 1945, Japan became the first nation to have nuclear weapons used against it, as the US dropped bombs on Nagasaki and Hiroshima. The OSS had plans to deliver in person a proposal for surrender that would not be as harsh as American propaganda would have people believe, which was calling for unconditional surrender at the time. ("that in fact the terms will be softer than most Japs believe.")[2] After WW2, the country was demilitarized. 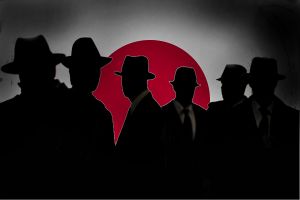 The Japanese deep state was rebooted after Japanese defeat in 1945. Since 2001, it has steadily remilitarized Japan.

After the events of 9/11, particularly under Shinzo Abe, Japan has been following the global "war on terror" program of increased mass surveillance, and increased penalties for exercising freedom of speech on topics not approved of by government.[3]

Hiroshi Hasegawa was a well-known Japanese journalist and "terror expert", who worked for NHK. He was circumspect about the US government's official narrative and encouraged his listeners not to uncritically accept the story of the 19 hijackers. He was found dead on 15 October 2001, a death which was only lightly reported at the time by NHK and other corporate media in Japan. Yukihisa Fujita of the Japan Democratic party on January 11th, 2008 made a 20 minute long statement at the House of Councillors, the upper house of the Diet (parliament) of Japan, where he questioned the official version of 9/11. He asked the current Prime Minister Fukuda, who was the Chief Cabinet Secretary under Koizumi cabinet in 2001: “How could terrorists attacked the Pentagon?”[4] - one of the safest airspaces on the planet.

Japan collects foreigners' fingerprints when they enter the country. In 2016, it announced plans to tie fingerprints to credit cards and passports, requiring foreigners to show them in hotels and when making other purchases.[5]

Article 9 of the Japanese Constitution is a clause in the national Constitution of Japan outlawing war as a means to settle international disputes involving the state. The Constitution came into effect on May 3, 1947, following World War II. In its text, the state formally renounces the sovereign right of belligerency and aims at an international peace based on justice and order.

The article also states that, to accomplish these aims, armed forces with war potential will not be maintained. The Constitution was imposed by the United States in the post-World War II period.[6].

Despite that, Japan maintains the one of the world's top 10 armed forces, Japan Self-Defense Forces, a formally defensive army with strictly offensive weapons like ballistic missiles and nuclear weapons prohibited. 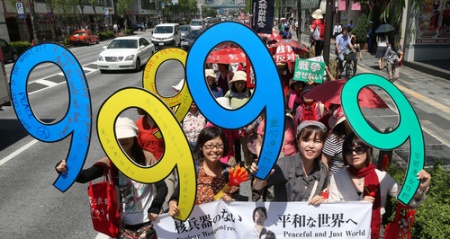 In June 2014, Japan's ruling coalition adopted a resolution that — for the first time since World War II — would clear the way to the Japanese armed forces to defend the country’s allies in combat. Shinzo Abe justified this with refernce to the "increasingly severe" security situation, and insisted that this was a defensive measure and that "There is absolutely no chance that Japan becomes a nation that wages war."[7] In May 2015, activists across Japan, including a group of around 500 people in front of the Prime Minister's office protested what they called the destruction of the Constitution's war-renouncing Article 9, as the cabinet was discussing this legislation.[8]

Japan has 45,000 kilograms of plutonium stored, one of the world's largest stockpiles, enough to create more than 5000 nuclear weapons. Officially it is there with intention of generating electricity. But given Japan’s technological and scientific expertise, the government could create nukes within a matter of months.[9]

Japan also does not have long-range missiles, but it does have space-launch capabilities. If the government choose, it could probably build and deploy longer-range missiles armed with nuclear weapons in a similar time period.

In March 2015, Japanese Prime Minister Shinzo Abe announced a plan to recreate Japan's intelligence agencies, using the UK's MI6 as a model. The Intelligence agencies were dismantled by the Allies after World War II. The rebuilding announcement follows territorial tensions with China and the be-headings of two Japanese hostages in the Middle East.

Japanese culture traditionally emphasises obedience, hindering public protest. However, in May 2015, over 1000 people sued the Japanese government to halt involvement in TPP.[10] In 2017, thousands protested mass surveillance that Shinzo Abe said was needed to fight "terrorism" .[3]

On 22 April 2015, a drone with traces of radiation was landed on top of Abe's office, carrying a camera and a small bottle with the radioactive symbol. Tests found it was carrying a small amount of radioactive caesium, reported. Abe was in Indonesia at the time, attending an Asian-African conference.[11]

On 24th April, radioactive contamination was discovered in a park in Tokyo.[12]

On 11 March 2011, a tsunami hit an already damaged nuclear power station at Ōkuma in Fukushima, Japan. The Guardian observed that the estimated time until the plant could be made safe would be 30 or 40 years.

An ambassador to Japan

Citizens of Japan on Wikispooks