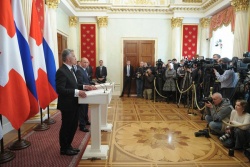 Image right: Press statements and replies to journalists’ questions. With President of Switzerland and OSCE Chairperson-in-Office Didier 7 May 2014

Wikispooks Comment Trademark calm reasoned statement and answers from Vladimir Putin but with some uncomfortably accurate and pointed remarks about where responsibility for the Ukrainian imbroglio really lies. Putin asks for the Eastern region referendum schedules for 11 May to be postponed. He also talks about the Ukrainian presidential election scheduled for 25 May in a helpful and non-confrontational manner - a manner which is never reciprocated by US spokespeople in general and Obam/Kerry in particular.

I want to start by welcoming once more our guest, the President of Switzerland and current head of the OSCE, and I want to thank him for the attention he is giving to settling this acute crisis in Ukraine. None of us are indifferent to what is happening there. The situation has us all very concerned.

Let me repeat once more that in Russia’s view, the blame for the crisis that emerged in Ukraine and is now taking the worst direction in its developments lies with those who organised the coup d’etat in Kiev on February 22-23, and have not yet taken the trouble to disarm right-wing radical and nationalist groups.

But no matter what the case, we must look for ways out of the situation as it is today. We all have an interest in ending this crisis, Ukraine and its people above all. Thus I say that we all want the crisis to end as soon as possible and in such a way that takes into account the interests of all people in Ukraine no matter where they live. The discussion with Mr President showed that our approaches to possible solutions to the crisis have much in common.

Russia urgently appeals to the authorities in Kiev to cease immediately all military and punitive operations in southeast Ukraine. This is not an effective means of resolving internal political conflicts and, on the contrary, will only deepen the divisions.

We welcome the release of Mr [Pavel] Gubarev, but we hope to see all the other political prisoners released too. We think the most important thing now is to launch direct dialogue, genuine, full-fledged dialogue between the Kiev authorities and representatives of southeast Ukraine. This dialogue could give people from southeast Ukraine the chance to see that their lawful rights in Ukraine really will be guaranteed.

In this context, we appeal too, to representatives of southeast Ukraine and supporters of federalisation to hold off the referendum scheduled for 11 May, in order to give this dialogue the conditions it needs to have a chance.

Let me stress that the presidential election the Kiev authorities plan to hold is a step in the right direction, but it will not solve anything unless all of Ukraine’s people first understand how their rights will be guaranteed once the election has taken place.

In this respect, I hold the same position as Mr President, because we both believe that direct dialogue between the Kiev authorities and representatives of southeast Ukraine is the key to settling this crisis.

But one of the essential conditions for getting dialogue underway is an unconditional end to the use of force, whether with the help of the armed forces, which is completely unacceptable in the modern world, or through the use of illegal armed radical groups. Russia is ready to contribute as it can to resolving the Ukrainian crisis and playing an active and positive part in the Geneva process.

Second, we hear that the violence must end and we must settle the conflict. We already heard similar words in Geneva.

VLADIMIR PUTIN: First, the idea that Russia holds the key to resolving the problem is a trick thought up by our Western partners and does not have any grounds in reality. No sooner do our colleagues in Europe or the US drive the situation into a dead end, they always say that Moscow holds the keys to a solution and put all the responsibility on us.

The responsibility for what is happening in Ukraine now lies with the people who carried out an anti-constitutional seizure of power, a coup d’etat, and with those who supported these actions and gave them financial, political, information and other kinds of support and pushed the situation to the tragic events that took place in Odessa. It’s quite simply blood-chilling to watch the footage of those events.

Russia will take every necessary step of course and do everything within its power to settle the situation. I can understand the people in southeast Ukraine, who say that if others can do what they like in Kiev, carry out a coup d’etat, take up arms and seize government buildings, police stations and military garrisons, then why shouldn’t they be allowed to defend their interests and lawful rights?

As for whether proposed measures suit Russia or not, we are not a party to this conflict; the parties to the conflict are in Ukraine itself. We were told repeatedly that our forces by the Ukrainian border were a source of concern. We have withdrawn our forces and they are now not on the Ukrainian border but are carrying out their regular exercises at the test grounds. This can be easily verified using modern intelligence techniques, including from space, where everything can be seen. We helped to secure the OSCE military observers’ release and I think also made a contribution to defusing the situation.

You asked what we can do now. As I said, what is needed is direct, full-fledged and equal dialogue between the Kiev authorities and the representatives of people in southeast Ukraine.

I spoke recently with German Federal Chancellor Angela Merkel, who proposed organising this dialogue in the form of a round table. We support this. I think it is a good idea and we will do everything we can to help make it happen. We must do everything possible to ensure that people in southeast Ukraine understand, feel and believe that after the Ukrainian presidential election on May 24 or 25 their lawful rights will be reliably guaranteed.

This is the real issue, not the presidential election, but ensuring that people in the southeast know that they won’t be abandoned and deceived. This is the crux of the matter, and it is for this that we need the dialogue we have been talking about today.

QUESTION: How realistic is a second round of talks in Geneva, Geneva-2? And how realistic is it to launch internal talks between the different groups in Ukraine in a situation when the parties have diametrically opposed positions to a degree never seen before in Ukraine’s history?

VLADIMIR PUTIN: I don’t know how realistic a Geneva-2 round of talks or even internal political talks in Ukraine itself would be. I simply believe that if we want to find a long-term solution to the crisis in Ukraine, open, honest and equal dialogue is the only possible option.