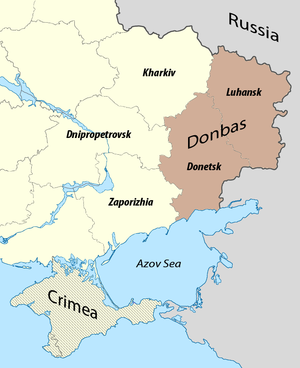 Currently nobody in power wants peace. Both sides believe they might yet improve their position on the ground. Thousands are needlessly dying horrible deaths in Europe. But the West now has a proxy war with Russia itself that is weakening Russia militarily, economically and diplomatically. Putin has to keep going, hoping to show something he can portray as victory and worth all the pain. Meantime the arms manufacturers and related interests are profiting enormously – and never forget that applies to both sides.

NATO is cock-a-hoop with probable expansion to include Sweden and Finland. That is one of very many ways in which Putin’s war is counterproductive for Russia and makes its strategic problems worse.

The most alarming aspect of all this is the blithe brinkmanship with which the West is pushing Putin towards a position where his only chance of claiming victory is to use tactical nuclear weapons. [And yes I have read Scott Ritter, I both know and like him but think he is very wrong about Russian ground superiority].

It does not have to be nuclear Armageddon. There is a more likely scenario where the war carries on for years, and probably Russia inflicts increasing damage on cities with long range weapons. That would be unlikely to involve radical change from current frontlines; we could have hundreds of thousands of casualties over as much as three to five years. I believe this is what NATO actually want to happen.[1] It would in effect leave a frozen conflict looking not too different to today, but with much more destruction.

This is the time that true statesmen would be trying to end the conflict. The only person who in the least appears to have been making genuine efforts is Macron, for which he is reviled. The UN evidently judge it too early to talk about more than ceasefires and humanitarian corridors. Do not be discouraged by or critical of that. These “confidence building measures” – ceasefires, evacuations, prisoner exchanges, humanitarian relief – are how conflict resolution classically starts.

So, if I were in the UN working on an outline peace proposal, what would it look like? Well, here are some first thoughts.

Now I know some people will ask why anybody should look at any proposals from me. Well, plainly I have no current standing. But I do have experience. Together with then Head of UN Peacekeeping, my late friend Kofi Annan, I while Head of Cyprus Section at the FCO drafted the Cyprus peace plan that we then took into proximity negotiation with Denktash and Clerides. We did not have total success but the process did contribute to the island’s current peace and prosperity.

Further as UK Representative to the Sierra Leone Peace Talks, I was deeply involved in the drafting and the negotiation with all sides of the Sierra Leone Peace Accord, as detailed at length in my book "The Catholic Orangemen of Togo".[2] That conflict probably had more casualties than the Ukraine War to date and was just as bitter, with its own extremely complicated history and causes.

So in suggesting ideas for the draft of a “Peace Plan”, this is something I have done in “real life”, not just a fool opining from his armchair. For that look to some of my other posts!

The first and most difficult question is territory, as it is in most armed conflict. Russia currently occupies large areas of Ukrainian territory. This is a powerful negotiating position. Ukraine has recovered significant ground around Kiev following that particular defeated attack, and smaller parcels elsewhere. In the last couple of weeks, gains and losses by both sides have been broadly in balance, though Western media emphasises the Ukrainian gains.

If we are starting from broadly the current territorial position, my basic proposal would be this. Ukraine formally cedes Crimea to Russia, and Russia hands back all other Ukrainian territory, including the Donbass.

This gives Putin a boast he can make to his people – the World, which had refused to recognise the Russian annexation, would now have bowed to Russia’s rule. The US, UK, Germany, all had been made to acknowledge Crimea is Russian and to eat humble pie. It would play well for Putin.

On the other hand, neither the West nor Ukraine would really have lost anything at all but pride. It would simply be bringing the de jure and de facto in line, which is generally a good thing. Few seriously believe the Ukrainian army is going to be able to retake Crimea. To do so would indicate an extremely bloody war, with very serious potential to escalate to the nuclear.

Crimea is in practice now Russian. It makes sense to base a peace deal on acknowledging this reality.

Is Crimea enough of a prize for Putin to give up all of Russia’s other gains? I believe so. There is a realistic chance that Russia could suffer humiliating loss of some of the areas it holds. Much better to negotiate them away while you have them.

Could Zelensky survive giving up the Crimea? Well, his personal prestige is now enormous. His people are brave but would welcome an end to the war, and the number of Ukrainians still in Crimea is now low. In return for getting back all of the Donbass lost in 2014 plus Kherson and Mariupol, and getting an end to the war, I think it is not impossible for Zelensky to sell giving up the Crimea as the price of peace.

The Donbass was of course Putin’s given reason for invasion. It would be hard for Putin to give up Donbass because it is central to his consistent programme of bringing Russophone areas of ex-Soviet states into Russia. But his domestic position in a long was would weaken if not successful. Given guarantees on Crimea and an end to ruinous war and sanctions, I think he could accept it after negotiation, with a number of figleafs.

It is worth noting that a bilateral agreement is not possible. Any agreement is going to need to involve a much wider group of parties, on for examples the lifting of sanctions and recognition of Russian annexation of Crimea.

So here is a start to my proposed bundle:

Now here is the moral dilemma. If you want to insist on no immunity for war crimes, you would need to be willing to pursue total war to the utter defeat of one side. You cannot get a peace deal that involves putting Putin on trial at the Hague. Equally neither side can get all it wants on any subject without total victory.

When discussing Cyprus with Kofi Annan, we agreed any peace deal would involve Turkey giving up some land in proportion to its percentage of population. The possibilities were Morphou or Karpass. We realised that this land deal would need to entail some assistance with population relocation of those who wished to move. It is often impossible to resolve a geographic conflict without some element that can be portrayed as endorsement of ethnic cleansing. These are the problems of peace.

I do hope that gives you some material for your own thought. It will no more interest the partisans on either side than it currently does those in power. Thus I sadly expect the killing to continue. I am off to Turkey tomorrow for a briefing on the limited peace talks that have taken place to date. That does not mean I will necessarily be able to spread information further at this stage.