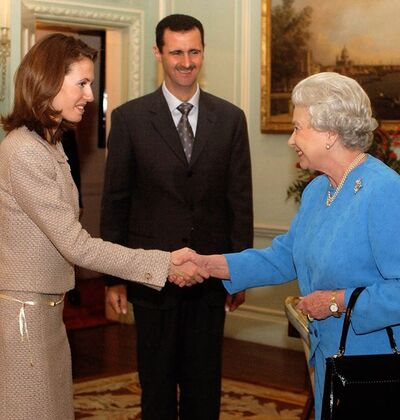 Meeting the Queen at Buckingham Palace. Having married his British wife Asma in December 2000, and following a visit to Syria by Tony Blair in November 2001,[1] Bashar and Asma al-Assad were invited to pay an official visit to the United Kingdom in December 2002.[2]

Born and raised in Damascus, Assad graduated from the medical school of Damascus University in 1988, and started to work as a doctor in the Syrian Army. Four years later, he attended postgraduate studies at the Western Eye Hospital in London, specialising in ophthalmology. In 1994, after his elder brother Bassel al-Assad died in a car crash, Bashar was recalled to Syria to take over Bassel's role as heir apparent. He entered the military academy, taking charge of the Syrian occupation of Lebanon in 1998.

On 16 July 2014, Assad was sworn in for another seven-year term after taking 88.7% of votes in the first contested presidential election in Ba'athist Syria's history.[6][7][8] The election was criticised by media outlets as "tightly controlled" and without independent election monitors, while an international delegation led by allies of Assad issued a statement asserting that the election was "free, fair and transparent".[9][10][11] The Assad government describes itself as secular,[12] while some experts claim that the government exploits sectarian tensions in the country and relies upon the Alawite minority to remain in power.[13][14]

Once seen by the international community as a potential reformer, the United States, the European Union, and the majority of the Arab League called for Assad's resignation from the presidency after he allegedly ordered crackdowns and military sieges on Arab Spring protesters, which led to the Syrian insurgency.[15][16][17] During the insurgency, an inquiry by the United Nations reported finding evidence which implicated Assad in war crimes.[18] In June 2014, Assad was included in a list of war crimes indictments of government officials and rebels handed to the International Criminal Court.[19] Assad has rejected allegations of war crimes, and criticised the American-led intervention in Syria for attempting regime change.[20][21] After the election of Donald Trump, the priority of the United States concerning Assad was initially not to force him out of power, but this policy quickly reversed in the wake of the 2017 Khan Sheikhun chemical attack.[22][23]

By March 2016, five years after the Arab Spring violence first erupted in Syria, some 250,000 Syrians had lost their lives and more than 11 million others forced from their homes as the Syrian Arab Army, supported by Iran's Hezbollah militia and Vladimir Putin's Russia, were battling with those opposed to Bashar al-Assad, including the NATO-backed Free Syrian Army, Al Nusra jihadis, Al Qaeda's White Helmets, the US-backed Kurdish YPG forces and Israeli-backed ISIS militants.[24]

On 7 April 2017, President Donald Trump launched 59 cruise missiles against a Syrian airforce base in response to the alleged sarin gas bombing of Khan Sheikhun in Idlib province on 4 April 2017, which the UK-based Syrian Observatory for Human Rights reported had resulted in the death of more than 80 people. Syria's air defences and electronic counter measures were reported to have destroyed 34 of the cruise missiles.[25] Without providing supporting evidence, Trump said:

"On Tuesday, Syrian dictator Bashar al-Assad launched a horrible chemical weapons attack on innocent civilians. Using a deadly nerve agent, Assad choked out the lives of helpless men, women and children. It was a slow and brutal death for so many. Even beautiful babies were cruelly murdered in this very barbaric attack."[26]

Commentators were quick to refute the Trump Administration narrative,[27] and US Secretary of State Rex Tillerson went to Moscow on 12 April 2017 to apologise for the cruise missile attack.[28]

On 27 April 2017, Britain's Foreign Secretary Boris Johnson said he and Prime Minister Theresa May agreed that in the event of "another chemical attack by the Assad regime", it would be hard for the UK to refuse any request from the US to join airstrikes:

"If the United States has a proposal to have some sort of action in response to a chemical weapons attack, and if they come to us and ask for our support, whether it is with submarine cruise missiles in the Med or whatever it happens to be, in my view, and I know this is also the view of Prime Minister, it would be very difficult for us to say no,” told the BBC. Asked if any UK strikes against Syria would need approval from the House of Commons (to be dissolved on 3 May for the UK/2017 General Election), Johnson said: “I think that needs to be tested."[29]

A Document by Bashar al Assad