The World Economic Forum is one of the key think-tanks and meeting places for the management of global capitalism. Under the leadership of professor Klaus Schwab, it has played an increasingly important role in coordinating the big corporations' rule of the world over the last three decades. Its plan the Great Reset is immensely sinister.

Each year, a forum is held Davos, one of the biggest ski resorts in Switzerland. Therefore the whole WEF is often simply referred to as "Davos". 3,000 business leaders (the core attendees), international political leaders, central bankers, think-tankers, economists, celebrities and journalists gather for up to five days to discuss global issues, across 500 sessions, providing a platform for dialogue and serving as a catalyst for action.

Individuals pay up to $US50,000 for membership of this elite group, and up to half-a-million for premium corporate memberships.

In the summer of 1971, Klaus Schwab invited 444 executives from Western European firms to the first European Management Symposium held in the Davos Congress Centre under the patronage of the European Commission and European industrial associations, where Schwab sought to introduce European firms to American management practices.

Over the years it has grown to a large unwieldy event, with up to 20,000 people[citation needed] being involved. In addition to the public, well broadcast forum discussions, there are many private meetings of a much more select character.

Over the years, themes such as climate change and sustainability became central themes of discussions. However, the subjects were discussed from the elitist perspective of the richest people in the world, hinting at dystopian top-down plans for "change in consumption patterns", population reduction, etc.

The WEF is central in the implementation of the Great Reset, a plan for an audacious and immensely far-reaching corporate takeover of the world.[citation needed]

The WEF was one of the organizers of the Event 201 dry run for the Covid-19 lockdown, leading to suspicions the group was - at the very least - exploiting the situation to introduce The Great Reset.

On October 10, 2016, the WEF announced the opening of its new Center for the Fourth Industrial Revolution in San Francisco. According to the WEF, the center will "serve as a platform for interaction, insight and impact on the scientific and technological changes that are changing the way we live, work and relate to one another"

In April 2020: "WEF Hopes to Restart Global Economy With Blockchain Technology" after the COVID-19/Lockdowns.[10] 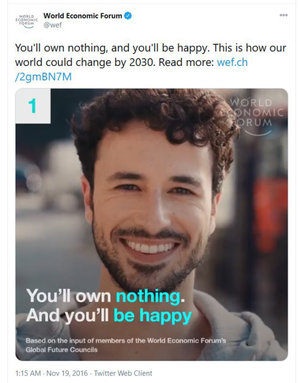 In a short fiction story by Ida Auken (Member of the Parliament of Denmark) on the WEforum website from late 2016 she envisions a future[12] in which no one has any private property anymore, since the concept of ownership became obsolete in a city where everything can be ordered as a service. She points out that this is not her "utopia or dream of the future", however, this article is very much in line with a talk she held in 2015, in which she more or less promoted the concept:[13][14]

“And if you lease, why should­n’t you lease your refrig­er­a­tor, or your wash­ing machine, or our dish­wash­er. Why do you want to own it? I mean it’s not like the plas­tic and the met­al is like, ​“You! I own it.” A bro­ken dish­wash­er. I mean wow. No, why don’t you want to go into a busi­ness mod­el where the com­pa­ny owns it? You know what hap­pens when the com­pa­ny owns it? Actually, they can bring down the prices because they don’t have to buy new met­al and new plas­tic.”
Ida Auken [15]

Her intentions and concerns for the environment may be genuine, but like privatisation before, it could be used to rob people of their remaining rights and create over time, in a period of multiple decades into the next century, the population for a new feudal system. Not officially connected, but the United Nations plan Agenda21 focuses to some extent on migration into cities, which is a 'naturally' occurring phenomenon anyway. By improving housing in urban areas, and/or gradually stopping municipal services outside specified development regions (cities and their suburbs) it can animate the inflow into these areas.[16][17][18]

In Pope Francis third encyclical: "Fratelli tutti" (All Brothers), he made two points regarding private property that can be seen in a similar way as the article by Ida Auken:[19][20]

119. In the first Christian centuries, a number of thinkers developed a universal vision in their reflections on the common destination of created goods. This led them to realize that if one person lacks what is necessary to live with dignity, it is because another person is detaining it. Saint John Chrysostom summarizes it in this way: “Not to share our wealth with the poor is to rob them and take away their livelihood. The riches we possess are not our own, but theirs as well”. In the words of Saint Gregory the Great, “When we provide the needy with their basic needs, we are giving them what belongs to them, not to us”.

120. Once more, I would like to echo a statement of Saint John Paul II whose forcefulness has perhaps been insufficiently recognized: “God gave the earth to the whole human race for the sustenance of all its members, without excluding or favouring anyone”. For my part, I would observe that “the Christian tradition has never recognized the right to private property as absolute or inviolable, and has stressed the social purpose of all forms of private property”. The principle of the common use of created goods is the “first principle of the whole ethical and social order”; it is a natural and inherent right that takes priority over others. All other rights having to do with the goods necessary for the integral fulfilment of persons, including that of private property or any other type of property, should – in the words of Saint Paul VI – “in no way hinder [this right], but should actively facilitate its implementation”. The right to private property can only be considered a secondary natural right, derived from the principle of the universal destination of created goods. This has concrete consequences that ought to be reflected in the workings of society. Yet it often happens that secondary rights displace primary and overriding rights, in practice making them irrelevant.