“What we are very proud of, is that we penetrate the global cabinets of countries with our WEF Young Global Leaders. (YGL)”
Klaus Schwab (2017)  [1]

Not to be confused with the predecessor group, the WEF's Global Leaders for Tomorrow (1992-2003)

The Young Global Leaders, or Forum of Young Global Leaders is a deep state recruitment network launched by Klaus Schwab in 2004.[2] Scores, perhaps even hundreds of its members, like those of the Bilderberg group have assumed key positions in the COVID-19 event.

By 2021, the Young Leaders are starting to pop up as the top leadership of countries: French President Emmanuel Macron, New Zealand PM Jacinda Ardern, the "youngest Finnish PM ever" Sanna Marin, German Health Minister during the COVID-lockdowns Jens Spahn, possible Chancellor candidate Annalena Baerbock, and many others. 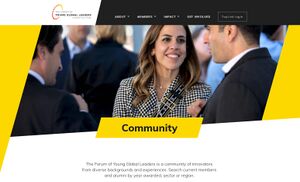 The group states that it connects the Young Leaders "to a community of remarkable peers and investing further in their leadership abilities, the aim is to create a ripple effect over five years that benefits their organizations and the world."[10]

Launched by Klaus Schwab of the World Economic Forum in 2004, the Young Global Leaders are governed by a board of twelve world and industry leaders, ranging from Queen Rania of Jordan to Marissa Mayer of Yahoo! and Wikipedia co-founder Jimmy Wales.[11] Schwab created the group with $1 million won from the Dan David Prize,[12] and the inaugural 2005 class comprised 237 young leaders. Young Global Leaders participate in the Annual Meeting of the New Champions, established in 2007 and known informally as "Summer Davos", alongside Global Growth Companies and other delegations to the World Economic Forum.[13]

BusinessWeek's Bruce Nussbaum described the Young Global Leaders as "the most exclusive private social network in the world",[14] while the organization itself describes the selected leaders as representing "the voice for the future and the hopes of the next generation".

Representing over 70 different nations, Young Global Leaders are nominated by alumni to serve six-year terms and are subject to veto during the selection process. Candidates must be younger than 38 years old at the time of acceptance (meaning active YGLs are 44 and younger), and highly accomplished in their fields.[15][16][17] Over the years, there have been hundreds of honorees, including several popular celebrities, alongside recognized high achievers and innovators in politics, business, academia, media, and the arts.[18]

The year-by-year lists are not complete.

Fernando Zavala was listed under "active alumni" in 2010, but from unknown year.[21] Similarly Wadah Khanfar, who were members before 2008.[22] 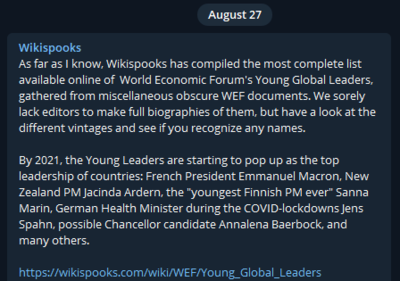 In Spring 2022 the Malone Institute published a more complete list[23], researched by the Pharos/Media Foundation

This page imported content from Wikipedia on 21 April 2021.
Wikipedia is not affiliated with Wikispooks.   Original page source here
Retrieved from "https://wikispooks.com/w/index.php?title=WEF/Young_Global_Leaders&oldid=257735"
Categories: