Propaganda is the deceitful use of information, such as deliberate lying (including lying by omission). The word has negative connotations since the 19th century, so Edward Bernays coined a new phrase ("public relations") as a connotation free alternative. Since November 2016, the commercially-controlled media have attempted to spread the meme of "fake news" websites, and suggested that they should be censored. 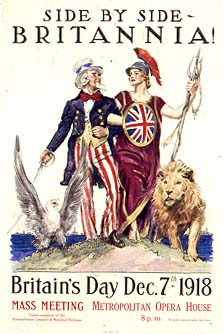 Britannia arm-in-arm with Uncle Sam symbolizing the British-American alliance in World War I.

Propaganda has been used by war makers for thousands of years.[1] Leaders have long exploited enemy images to inculcate fear or otherwise extend control over subjects. Historically, propaganda has assumed critical importance in times of war, in particular when a casus belli was sought to try to inflame public sentiment when starting a war. Propaganda has been produced on a large scale for around a century - i.e. since the time of WW1. In UK, MI7 was formed to exploit the commercially-controlled media, planting "fake news" to try to rally support against Germany.[2]

Edward Bernays, a widely acknowledged master of propaganda, referred to propaganda as "the invisible government". He rebranded it as "public relations".[3] 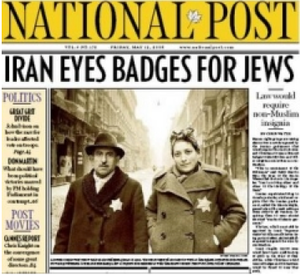 Amir Taheri's smear against the government of Iran

Propaganda in Western Europe seems to have returned to World War Two levels after the roll-back of the state in Europe and the United States. Multinational corporations have taken more and more power, and a complicit commercially-controlled media has become an integral part of that 'power grab' and increasingly ideologically aligned with it. Secrecy has become normal, even with governments no longer seeing themselves as serving the populations that elect and pay for them.

The Smith-Mundt Act originally did prohibit the use of propaganda, produced for foreign audiences, to be directed at domestic audiences in the United States. With the passing of the National Defense Authorization Act for Fiscal Year 2013 this was changed; originally justified with the explanation that it would help to inform expat communities in the US.[4] Early criticism cited the Department of Defense intention to get rid of the Smith-Mundt Act and other restrictions, "because it prevents information activities designed to prop up unpopular policies—like the wars in Iraq and Afghanistan".[5] Robbie Martin noted that after the ban, the use of foreign news sources funded by the Broadcasting Board of Governors (BBG) did spike on Vice. He also notes that now many narratives friendly to the US government position first appear at media organizations overseen by the BBG before they become part of mainstream media reporting.[6]

After the 2016 US Presidential Election, in November 2016, the phrase "Fake News" was launched, with the help of commercially-controlled media. Perhaps counter intuitively to Wikispooks' readers, it was not used to describe the output of the corporate media, but instead, used to describe smaller, independent groups, especially websites. One list which has attracted particular attention was a list of 200 websites, including RT, Naked Capitalism, Zero Hedge and Wikispooks. This was published by the spooky ProporNot group, and cited as a source by the Washington Post.