Pierre Morad Omidyar is a French-born Iranian American entrepreneur who is the founder and chairman of the eBay auction site. He became a billionaire at the age of 31 with eBay's 1998 stock market flotation.[1] In 2019, Alexander Rubinstein and Max Blumenthal wrote an article entitled Pierre Omidyar: A Billionaire Prone to Reclusiveness and his Trove of State Surveillance Secrets.[2]

Omidyar and his wife Pamela founded Omidyar Network in 2004 "in order to expand their efforts beyond non-profits to include for-profits and public policy". Since 2010 Omidyar has been involved in online journalism as head of investigative reporting and public affairs news service Honolulu Civil Beat.[3] And in 2013 he financed a yet to be named journalism venture to include Glenn Greenwald, Laura Poitras, and Jeremy Scahill.[4][5] The new venture, First Look Media, went on to publish The Intercept in 2014.[6]

Omidyar was born in Paris, France to Iranian immigrant parents who had been sent by his grandparents to attend university there.[7] His mother Elahé Mir-Djalali Omidyar, who did her doctorate in linguistics at the Sorbonne, is a well-known academic.[7] The family moved to the US when Omidyar was a child.

Omidyar's interest in computers began while he was a student at The Potomac School in McLean, Virginia in the 9th grade. He graduated from St. Andrew's Episcopal School in Potomac, Maryland in 1984. Omidyar graduated from Tufts University in Medford/Somerville, Massachusetts with a bachelor's degree in computer science in 1988. Shortly after, Omidyar went to work for Claris, an Apple Computer subsidiary, where he worked on the team upgrading MacDraw to MacDraw II. In 1991, he co-founded Ink Development, a pen-based computing startup that was later rebranded as an e-commerce company and renamed eShop.

In 1995, at the age of 28, Omidyar began to write the original computer code for an online venue to enable the listing of a direct person-to-person auction for collectible items. He created a simple prototype on his personal web page, and on Labor Day, Monday, 4 September 1995 he launched an online service called Auction Web which would eventually become the auction site eBay.[8]

It was hosted on a server Omidyar had created for information on the ebola virus. The first item sold on the site was a broken laser pointer. Omidyar was astonished that anyone would pay for the device in its broken state, but the buyer assured him he was deliberately collecting broken laser pointers. Similar surprises followed. The business exploded as correspondents began to register trade goods of an unimaginable variety.

Omidyar incorporated the enterprise; the small fee he collected on each sale financed the expansion of the site. The revenue soon outstripped his salary at General Magic, and nine months later Omidyar decided to dedicate his full attention to his new enterprise.

In 1997, Pierre Omidyar changed the company's name to eBay and began to advertise the service aggressively. The word "eBay" was made up on the fly by Omidyar when he was told that his first choice for his web site, "echobay", had already been registered. Not wanting to make a second trip to Sacramento, he came up with "eBay". The frequently repeated story that eBay was founded to help Omidyar's fiancée trade Pez candy dispensers was fabricated by a public relations manager in 1997 to interest the media. This was revealed in Adam Cohen's 2002 book [9] and confirmed by eBay. The service was free at first, but started charging in order to cover internet service provider costs. eBay still charges 10% of sales as a final sale fee.

Jeffrey Skoll joined the company in 1996. In March 1998, Meg Whitman was brought in as president and CEO, and continued to run the company until January 2008, when she announced her retirement. In September 1998, eBay launched a successful public offering, making both Omidyar and Skoll billionaires. [As of July 2008], Omidyar's 178 million eBay shares were worth around $4.45 billion.[10] Omidyar is also an investor of Montage Resort & Spa in Laguna Beach, California.

Omidyar Network describes itself as a philanthropic investment firm dedicated to harnessing the power of markets to create opportunity for people to improve their lives. Established in 2004 by eBay founder Pierre Omidyar and his wife Pam, the organization invests in and helps scale innovative organizations to catalyze economic, social, and political change. [14]

The Intercept - A Honeytrap?

In January 2018, FBI whistleblower Sibel Edmonds asserted Pierre Omidyar had decided to create The Intercept to not only take ownership of the Snowden leaks but also to continue his blockade against WikiLeaks and create a “honey trap” for whistleblowers.[15] 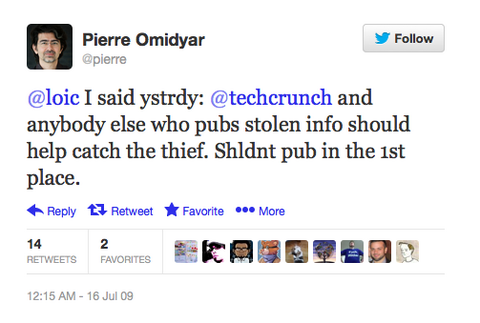 Omidyar has defended NSA surveillance and on July 16, 2009, he tweeted "Anybody who publishes stolen info should help catch the thief".

This page imported content from Wikipedia on 9 December 2013.
Wikipedia is not affiliated with Wikispooks.   Original page source here
Retrieved from "https://wikispooks.com/w/index.php?title=Pierre_Omidyar&oldid=156184"
Categories: