The "War on Drugs" is a social control policy conceived in the USA in the late 1960s and launched in 1971 by the government of Richard Nixon. Nixon's domestic policy chief, John Ehrlichman, later admitted that it was a ploy to undermine opposition to the administration, principally by African Americans and opposition to the Vietnam War.[1]

In recent decades the ideology has been used to justify fining, imprisoning or killing drug users, producers, dealers or drug smugglers.[2] Like another perpetual war, the "war on terror", the crusade against drugs is fear- rather than evidence-based. It has been enacted almost worldwide with the help of international groups, most importantly the UN.[citation needed] It encompasses many recreational drugs, but excludes alcohol and tobacco. Its effects include increasing corporate profits, exerting a strategy of tension like stress upon the general populace (e.g. by providing material for blackmail) as well as helping the supranational deep state to increase its control over the illegal drug trade.

The official narrative is that the governments of the world must work together to preserve their citizens' dignity[3] to prevent citizens from using a range ofdrugs which are so dangerous as to overcome the weak-minded and vulnerable.

“A free market for drugs would unleash a drug epidemic, while a regulated one would create a parallel criminal market.”
Antonio Maria Costa [4]

In the USA, the Drug Enforcement Administration (DEA) must ensure that the drug prohibition laws are adhered to, while internationally drug control treaties are need to reduce drug supply. Even relatively harmless drugs such as cannabis must be prohibited since they act as "gateway drugs" to other, more harmful ones.

The official opposition narrative is that it is a huge mistake which doesn't actually succeed in reducing drug consumption, drug-related crime or fatalities. Evidence cited includes the Dutch or Portuguese policy of decriminalisation failed to "unleash a drug epidemic", and may in have lead to a decrease in recreational drug usage. In the USA by contrast, illicit drug use has been increasing[5]:- heroin use, for example, increased by 63 percent from 2003 to 2013.[6] In 2011, an article in The Guardian on the 40th anniversary of the "war on drugs" was critical of the policy, but didn't mention the experience of legalisation, or of John Ehrlichmans candid admission.[7] It concluded that drug policy should "started from the premise that life in most places is so awful that it leads to catastrophic addiction".[8]

The official opposition narrative doesn't question the putative altruism of the motivation behind the "war on drugs". In fact, more and more people are seeing that the deep state is playing both sides - shaping society according to its designs while reaping huge profits from both the global drug trade and the organised drug law enforcement actions, to say nothing of ancillary businesses such as the prison industrial complex, mass incarceration and drug related money laundering.[9]

John Ehrlichman, Nixon's domestic policy chief, admitted in a 1994 interview that the "War on Drugs" was a ploy to undermine Nixon's political opposition, candidly stating "Did we know we were lying about the drugs? Of course we did."[7]

Amidst the tired rhetoric about being "tough" on drug users, many observers have noted that some drugs such as cannabis have been de facto legalised in various European countries without a surge in demand — indeed, often with a decrease in use. This point is not dwelt upon by the commercially-controlled media, who continue to suggest that the "war on drugs" is really about reducing harm to people. Moreover, legal drug use in USA has surged during the same time, a trend rarely remarked upon in the context of the "war on drugs".[10] In fact, scientific considerations about the impact of recreational drug use on society as a whole or upon individual users are only of marginal interest to the politicians.[11]

Drug epidemics are part of Disaster planing and preparation. It often involves Illegal drug trade, i.e. when LSD was introduced and tested by the CIA in the 1950s or more recently the Afghanistan/Reconstruction as part of the "war on terror". 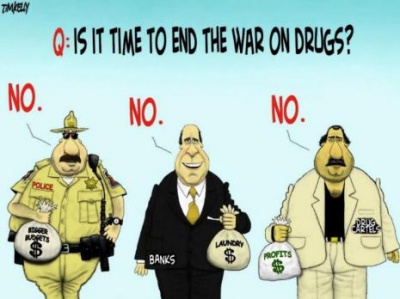 Historically, cultures have long sought to control use of certain drugs.[12] In the 19th century, the UK fought the Opium Wars against China to promote opium use by the Chinese. Local laws about drug use began in USA in 1860. The first national law to restrict drug use and distribution in USA was the 1914 Harrison Narcotics Tax Act. Harry J. Anslinger was the first Commissioner of the Federal Bureau of Narcotics, from August 12, 1930 to May 1962. Alcohol Prohibition began in 1920, officially about temperance but unofficially a move by Standard Oil to outlaw the use of alternatives to their petroleum monopoly.

The 1937 Marijuana Transfer Tax Act was passed after efforts by Andrew Mellon, Randolph Hearst and the Du Pont family, again with ostensibly altruistic purposes. It was in fact an effort to destroy the fledgling hemp industry, since hemp was becoming a cheap and superior substitute for the paper pulp that was used to make newspapers. The act followed a barrage of overtly racist propaganda.[13]

The modern "War on Drugs", dated from US President Richard Nixon's 1971 announcement that "drug abuse" was public enemy number one, continues the trend of a deceitful official narrative serving as cover for deeper purposes. The late 1960s was a period of growing disillusionment amongst US youth with the Vietnam War in particular and the establishment in general. This was a key opposition group which Nixon sought to disrupt. In 2011, The Guardian claimed that Nixon was "motivated by addiction among US soldiers in Vietnam."[8]

Psychedelic drugs had been heavily researched by the CIA (Project MKULTRA and other such) and found to be unhelpful for military purposes, but potentially effective at weakening social conditioning. The importance of such drugs to the burgeoning peace movement can hardly have been lost on legislators. The 1971 Convention on Psychotropic Substances banned LSD and many other such drugs in USA and other signatory countries.

The global drug trade has long been the source of immense profits for those groups which control it. Small scale trade is carried out by individuals and small groups, but nowadays the top levels are tightly dominated by deep state groups, which derive huge off-the-books profits from the practice. Some is fed straight back into black budgets to fund black ops, some is laundered and siphoned off as private profits. The "war on drugs" is essential to protecting these high profit margins.

The "war on drugs" facilitates the use of government resources to eradicate competition to CIA drug dealing.

Banks profit from the consequent demand for money laundering, with some in Florida, for example, charging fees of a percent or two for 'counting' large cash deposits. A frequent comment about the "Global Financial Crisis" is that without drug money, the big banks would go out of business. 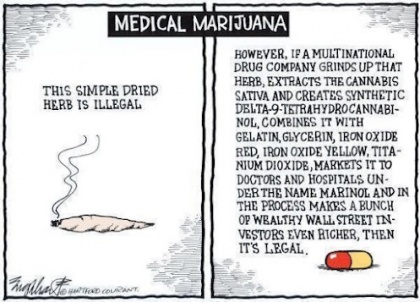 Pharmaceutical companies financially support campaigns to prevent legalisation of recreational and pain-killing drugs.[15] In contrast to naturally occurring herbal remedies, many of which have long histories of safe use, they seek to promote the use of chemical analogues. Adjudication of their relative lack of safety is up to the national regulatory bodies such as the FDA, many of which are captured by big pharma. As novel pharmaceuticals they are patentable - and therefore monopolizable, if naturally growing opposition can be eliminated through legal measures such as the "war on drugs".

Law enforcement and a privatised prison system provide further commercial incentives to keep drugs illegal. Former LAPD Deputy Chief Stephen Downing explains that the practice of sending undercover police into schools to buy drugs "is not about public safety – the public is no safer, and the school grounds are no safer. The more arrests you have, the more funding you can get through federal grants and overtime."[16]

About half of the US prison population are locked up for drug offences; as a major part of the school-to-prison pipeline, the "war on drugs" is a major factor in the profitability of the private prisons.[16] Mandatory minimum sentences have seen non-violent drug dealers convicted for as long as 55 years without the possibility of parole.[17][18] 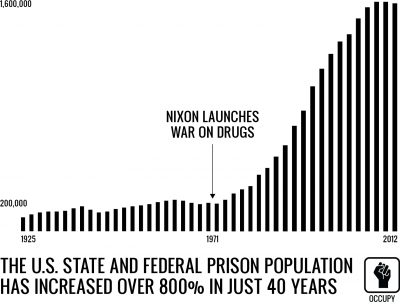 Sting operations are carried out in the US under the "war on drugs" even against children who have mental conditions such as autism. The movie Reefer Madness dramatically demonstrates how big media has been used to manipulate populations into accepting laws which infringe on existing human rights or civil liberties. As a victimless crime, possession of drugs is an charge which can easily be used to frame or threaten vulnerable people.

The "War on Drugs" is regularly exploited a cover for US/Foreign Policy. The major drug producing regions of the world are of particular interest to the deep state.

Colombia is used as a US beachhead in South America. Peter Dale Scott correctly predicted when Plan Colombia was announced that increased military planes flying to and from Colombia would correlate with increased cocaine arriving in the USA. Peru was turned into a "narco-state" for a time under the kleptocracy of Alberto Fujimori, managed by deep state spook Vladimiro Montesinos.

In 2014 the Special Inspector General for Afghanistan Reconstruction (SIGAR) John F. Sopko admitted that "Despite spending over $7 billion to combat opium poppy cultivation and to develop the Afghan government’s counternarcotics capacity, opium poppy cultivation levels in Afghanistan hit an all-time high in 2013."[19] Sibel Edmonds explains that profits from opium production and export has been massively streamlined and stepped up during the US occupation of Afghanistan, and that Russia has been more or less cut out of the trade, leaving Turkey as the major shipping point.[20]

In the Philippines, Rodrigo Duterte claimed that drugs presented a threat to national security, and that this justified the extra judicial killing of thousands of people, arguably including journalists intent on reporting on his conduct.[21][22]

26 August 2016 Robin  An expose of the truth behind this elaborate fiction
A still slightly random assortment of ways in to the purposes of the fiction of drug interdiction and the reality of the multi-trillion dollar business which this charade evolved to protect.