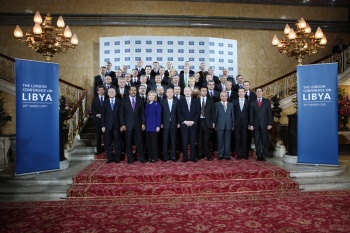 Photo-call of participants in the March 2011 London Conference on Libya that resolved to support miltary action against Libya pursuant to 2011 UNSC resolutions 1970 and 1973. Source: London FCO.

The 2011 Attacks on Libya represented "perhaps one of the most egregious examples of US military aggression and lawlessness in recent memory".[1] The US was aided by 13 fellow NATO members (Belgium, Bulgaria, Canada, Denmark, France, Greece, Italy, Netherlands, Norway, Romania, Spain, Turkey, the UK), and 4 other states (Jordan, Qatar, Sweden & United Arab Emirates). They began in March and ended on 31 October, 10 days after Muammar Gaddafi was murdered by his NATO-backed rebel captors. Seven months of NATO airstrikes were estimated to have killed 60,000 Libyan civilians.[2]

Many of the intervening countries talked about "humanitarian intervention". Wikipedia terms this event the "Libyan Civil War" and says nothing about foreign sponsorship.

The official narrative omits to note that in 2007, retired US 4-star General Wesley Clark told how he learned in 2001 of a Pentagon plan to destroy the governments of 7 countries in 5 years:- Iraq, Syria, Lebanon, Libya, Somalia, Sudan and Iran.[3]

From observing the news media and television coverage in 2011 one could get the impression that literally everybody who used the word "humanitarian" and called for the removal of Gadaffi did not care for the country anymore the second he died; when it sunk into civil war, with terror bombings, kidnappings, extrajudicial killings and a treatment of Africans that was far worse than before.[4][5] 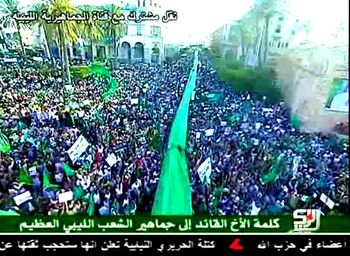 There is no shortage of alternative factors which may have contributed to the decision to attack Libya. These are summarised briefly below and elaborated on in the Related Documents section.

RT suggested that NATO intervention may have been motivated by Gaddafi's attempts to establish a unified federation of African states that would use the gold dinar as its currency and demand that foreign importers of African oil pay in gold.[8][9] Despite its stated opposition to NATO intervention, Russia abstained from voting on United Nations Security Council Resolution 1973 instead of exercising its veto power as a permanent member of the Security Council; four other powerful nations also abstained from the vote — India, China, Germany, and Brazil — but of that group only China has the same veto power. However, the fifth BRICS member, South Africa, actually voted in favour of UNSCR 1973.[10] According to leaked E-Mails, the US State Department expected substantial physical Gold holdings in Libya.[11][12]

“Gaddafi's government holds 143 tons of gold, and a similar amount in silver. This gold was intended to establish a pan-African currency based on the Libyan golden Dinar. This plan was designed to provide Francophone Africa with an alternative to the CFA."”
Ellen Brown (14th March 2016)  [13]

Before the US, Britain and France carried out a military attack on Libya to get their hands on its energy wealth, they took over the Libyan sovereign wealth funds, estimated at $70 billion. Facilitating this operation was the head of the Libyan Investment Authority (LIA), Mohamed Layas, as revealed in a cable published by WikiLeaks. On 20 January 2011, Layas informed the US ambassador in Tripoli that LIA had deposited $32 billion in US banks. Five weeks later, on February 28, the US Treasury "froze" these accounts. According to official statements, this is "the largest sum ever blocked in the United States," which Washington held "in trust for the future of Libya." Such an injection of capital will be welcome into the deeply indebted US economy. In March 2011, the EU "froze" around €45 billion of Libyan funds.[14]

With large supplies of oil, water, a relatively small population, a stockpile of gold and a leader in nobody's pocket, some have suggested that Libya was perceived as a country that was dangerously independent of Western influence. Ellen Brown notes that one of the first actions taken by the Libyan rebels was to set up their own central bank.[15].

Libya has the 9th largest reserves of oil, and the largest of any nation in Africa.

A substantial area of the Nubian Aquifer lies beneath Libyan territory. It is the largest known fossil water aquifer containing an estimated 150,000 km3 of fresh water and is the source of the Great Man-made River, the world's largest irrigation project.[16]

Evidence suggests that the war may have been incited, organised and/or funded by deep state actors outside the country. Ellen Brown asks why, although the rebels are still fighting, they have taken time out to create their own central bank.[17] A UK registered humanitarian charity, World for Libya, was revealed which operated in Libya with during that time, which has interesting links to another UK registered humanitarian charity in Syria at about the time a "humanitarian intervention" was planned for that country.

"The fall of Muammar Gaddafi in 2011 sent Libya into freefall, and spread chaos across northern Africa. Weapons poured into northern Mali and emboldened Islamic militias in the Sahel – one of the world's hottest, driest and least stable regions – to spread their influence over a number of towns and villages."[18]