Nicolas Berggruen is a billionaire investor (net fortune $2.3 billion) and sponsor of many think tanks and projects to promote elite ideas. His foundations are lavishly paying top politicians in both Europe and the US to be members. A dual American and German citizen, he is the founder and president of Berggruen Holdings, a private investment company and the Berggruen Institute, a think tank that works on addressing governance issues as well as the "cultures and philosophies behind political systems". He also finances the Think Long Committee for California and the Council for the Future of Europe. Through the Berggruen Institute he is also a co-founder, with the Washington Post, of The WorldPost, a media publication dedicated to global issues.

The press has referred to Berggruen as "the homeless billionaire", because he decided to get rid of his material possessions and live out of five-star hotels, rather than owning any homes.[1] He is interested in transhumanism.

Berggruen was born in Paris, the son of art collector Heinz Berggruen and actress Bettina Moissi. His father was of German-Jewish descent and his mother a Catholic of German and Italian/Albanian descent. Berggruen attended the École alsacienne in Paris and the boarding school Le Rosey in Switzerland, before completing a baccalauréat in Paris as a candidat libre in 1978. He worked as a trainee at London Merchant Securities in London, known today as LMS Capital Plc. He subsequently obtained a Bachelor of Science in Finance and International Business from New York University in 1981. He later worked for the investment company Bass Brothers Enterprises, in its real estate group. Between 1983 and 1987, Berggruen was a Principal at Jacobson and Co.

In New York, based on a trust fund worth about $250,000, Berggruen began buying real estate before moving on to stocks, bonds and a portfolio of private equity and venture funds as well as hedge funds. He founded Berggruen Holdings, Inc. in 1984 to act as investment adviser to a Berggruen family trust. In 1988, he and Julio Mario Santo Domingo co-founded Alpha Investment Management, a hedge fund that was sold to Safra Bank in 2004.

The Berggruen Governance Center is dedicated to the design and implementation of new ideas of good governance relevant to the common challenges of globalization in the 21st century. This is primarily being done through three projects: the 21st Century Council, the Council on the Future of Europe, and the Think Long Committee for California. 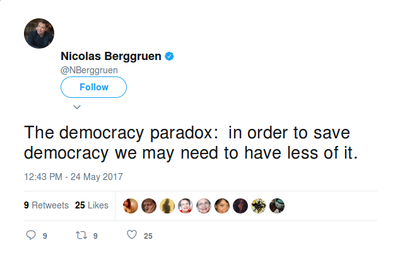