From Wikispooks
Jump to navigation Jump to search
Food Chain Reaction: A Global Food Security Game was a tabletop planning exercise with 65 "thought leaders" and policy makers held in November 2015 in Washington D.C.[1][2][3] During the exercise it was mentioned that:

The players were important business leaders, academics, officers and bureaucrats from an interlocking directorate in the end representing a number of intertwined deep state/corporate interests.

Players came from deep state entities such as the Albright Stonebridge Group; corporate media Thomson Reuters, Bloomberg News; Carter Ham the Former Commander of U.S. Africa Command; think tanks such as the Cato Institute, The Aspen Institute and several European think tanks and universities. Players from places such as the Brazil-U.S. Business Council, the U.S.-India Business Council, the World Bank and the Asian Development Bank were also participating[5].

The food trading cartels were present with Louis Dreyfus Commodities and Cargill. The Bill Gates network was represented through the Alliance for a Green Revolution in Africa and presumably by other entities.

The simulation focused on the 2020 to 2030 period during a global food crisis. Teams of participants represented governments, institutions, and businesses which had to respond to a global food crisis caused by population growth, rapid urbanization, extreme weather (a buzzword for climate change), and political crises.[6][7][8] Trade, climate, and "security" were found to be big issues in global food security.

As the game advanced, teams confronted a "new normal" characterized to a large degree by volatility and uncertainty, with food prices soaring 300-400%.[9]

As the game progressed, "a surprising convergence of ideas allowed teams to agree on common goals and engage in complementary activities." Recognizing their influence over global conditions, players took action—and "in the process, shaped the world", where solutions were "more innovative collaboration among governments, business, civil society and multilateral institutions.

The exercise ended with the implementation of a global carbon tax.[10]

They envisaged establishing a new coordinating entity under the United Nations/G20 to create the capacity to respond.[9] One player suggested the establishment of the Organization for Response to Disaster and Emergency Relief (ORDER). ORDER was characterized as a nonmilitary, humanitarian disaster relief organization that would serve as a coordinating mechanism to address "climate change–induced disasters".

In the end conclusions, the players broadly agreed on creating a new Strategic Headquarters under the United Nations to better coordinate member states’ use of military and nonmilitary assets, and to pre-position materials in areas of anticipated need.

They also agreed to strengthen existing institutions and authorities under the United Nations (e.g., the World Food Programme, the World Health Organization, the Food and Agriculture Organization, the Department of Peacekeeping Operations, the Office of the High Commissioner for Refugees, and the International Fund for Agricultural Development) and developing better coordination among them. [9] 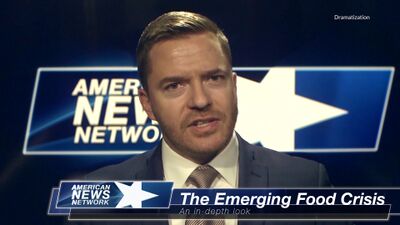 A news broadcast set up for dramatization, named "The World in 2020"