First Draft News is an "anti-disinformation" organization founded in 2015, i.e. at the same time as NATO's drive to control the news narrative. Its purpose is to give a sheen of credibility to propaganda stories by creating an array of seemingly scientific tools and methods.

"First Draft’s mission is to empower societies with accurate information in critical moments. We work to ensure the integrity of the world’s information ecosystem, developing and delivering pioneering techniques, tools and training for how information is discovered, shared and presented to the public."

First Draft formed as a coalition with nine founding partners in June 2015.

One of the founding organizations is the NATO-close Bellingcat; and Eliot Higgins and Aric Toler are specifically thanked for their help.[1]

Another founder, Andy Carvin, works for the NATO-close Atlantic Council, in its Digital Forensic Research Lab, which also collaborates closely with the Integrity Initiative

Another founding member is Sam Dubberley, who is an "advisory board member for the Syrian Archive - a non-profit that aims to support human rights investigators, advocates, media reporters, and journalists in their efforts to document human rights violations in Syria"...through " open source tools".[2], an activity that dovetails smoothly with what the British government was financing at the time (see: White Helmets)

First Draft may be used to launder propaganda, using "human rights investigators" in Syria, e.g. the White Helmets to collect or make videos and storylines etc for social media; this material is passed to 'laboratories' like Bellingcat, who use 'forensic tools' as required and declare that they are highly credible. These stories and videos are then passed to commercially-controlled media, who can claim to have done due dilligence and present a "fact checked" atrocity story. All the steps in this process, from the making, collecting, analyzing to finally the spreading in media of this propaganda, may be aided and funded by intelligence services or other deep state actors, using cutouts for plausible deniability.[Speculative]

The project draws on experts and organisations working in the field, including reported.ly, Eyewitness Media Hub, Storyful and Meedan.[3]

Sharyl Attkisson attributes the first usage of the the phrase "fake news", in its modern context, to articles published on First Draft's website.[5][6]

In 2020 the group published a lot of information about COVID-19.

"Lockdown could last for months. It is likely this is only the beginning of a new trend in falsehoods as people come to terms with a new lifestyle. We all play a role in keeping each other safe from the virus and the impact it has on our lives. The information we share plays a big role here too. Let’s apply the same level of care in not spreading viral misinformation as we do to the virus itself."

The network is lavishly financed by big corporations (Google,Twitter, Facebook) and foundations historically known to be close to the CIA (Ford Foundation, Open Society Foundations, and bears all the hallmarks of a covert government effort.

A giveaway for this is that Bellingcat, with close ties to NATO, was one of the founding partners.

It might be designed as an internal disciplining network, to steer the "primary target audience" journalists and academics to the 'right' kind of information sources, which might include easily twisted "open source" content a là Bellingcat.

An this internal reinforcing function works with politics as well. "For example, We recognize the value in sharing our knowledge with policymakers. First Draft works to inform all who have a stake in the dissemination of accurate information, including governments".

The partners include the bulk part of corporate media. 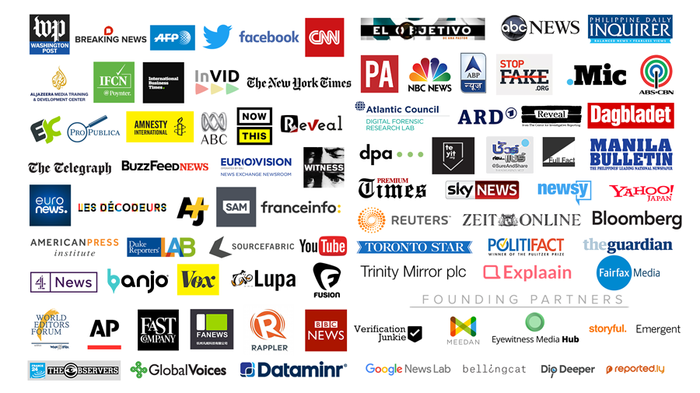