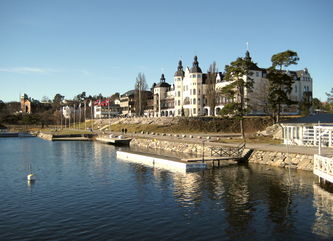 The 1973 Bilderberg Meeting was the 22nd such meeting and had participants from European countries, the United States, Canada and "various international organisations".[1] It was held at Saltsjöbaden, Sweden (as were the 1962 and 1984 Bilderbergs). The 79 guests included 15 business executives, 22 politicians, 1 financiers, 11 editors/journalists and 5 academics.

The meeting saw oil executives and bankers come together to discuss the possibility of a sharp rise in the price of oil -- which took place five months after the meeting, after the Yom Kippur War. 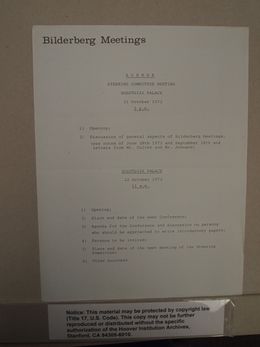 A meeting of the Bilderberg Steering Committee was held at the Soestdijk Palace on 21-22 October 1972 to discuss who to invite to the meeting and what to put on the agenda.[2]

Among the 1973 participants were the CEOs of Royal Dutch Shell, British Petroleum (BP), Total S.A., ENI, Exxon, as well as significant banking interests and individuals such as Baron Edmond de Rothschild and David Rockefeller. 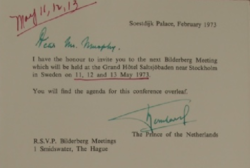 The presence or absence of Henry Kissinger, then US Secretary of State, in Saltsjöbaden has been a matter of some confusion, and is of importance as regards the claim that the 1973 Oil Shock was planned at the meeting. His name is on a memorandum from the Bilderberg’s US Secretariat containing the United States’ proposed list of guests,[3] but he decided not to attend,[3] and is not on the official guest list,[1]. William Engdahl has been inconsistent in his claims on this point.[3] Authors including Andrew Gavin Marshall have cited Engdahl on this point, apparently unaware that he is mistaken.[4]

1. The Possibilities of the Development of a European Energy Policy and the Consequences for European-North American Relations

The paper noted "the continued requests for price increases from Middle East producing countries, accelerated by the devaluation of the dollar."[1]

The discussion is reported as follows:[1]

This topic had two working papers, one by a Norwegian, one by an American.

The American working paper noted "The continued requests for price increases from Middle East producing countries, accelerated by the devaluation of the dollar. The international oil companies might wage a rear-guard action, but in the end they would yield rather than risk interruption of supplies. They believed it was up to the economies of the consuming countries to absorb these price increases."[1]

Five months after the meeting, the Yom Kippur War brought extensive rises in the price of oil, triggering the 1973 Oil crisis‎. Various commentators have suggested that this may not have been a coincidence. Sheikh Yamani has stated that he "is 100% sure that the Americans were behind the increase in the price of oil" in 1973.[5]