The "Islamic terrorist" is a powerful enemy image used by "counter terrorists" in their "war on terror". Its modern form was developed by deep state operatives at the 1979 Jerusalem Conference on International Terrorism.[citation needed] 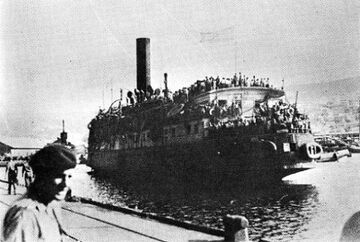 In 1947 and 1948 officials from MI6, the armed services, the UK Colonial Office and the UK Foreign Office undertook Operation Embarrass, a series of false flag attacks intended to try to stem Jewish immigration. These wre blamed a fictional group, the 'The Defenders of Arab Palestine'. The operation was exposed in 2010.[1]

In 1979, Benjamin Netanyahu convened a conference in Jerusalem "to focus public attention on the grave threat that international terrorism poses to all democratic societies."[2] At least 4 of the speakers were from Le Cercle, suggesting that the conference may have been planned in that deep state milieu.

In 1995, Francis Ghilès wrote for the International Herald Tribune about Algeria.[3]

The attacks of September 11, 2001 were a powerful boost to the idea of "Islamic terror", notwithstanding the fact that no evidence was presented implicating Muslim involvement in the acts. They also launched the meme of the suicide attacker. 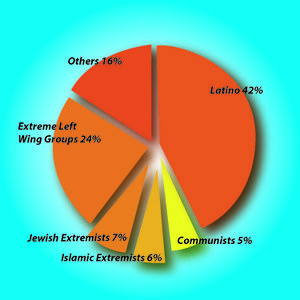 Infographic created from an FBI report[4][5] which shows, that only a small percentage of terrorist attacks carried out on U.S. soil between 1980 and 2005 were perpetrated by Muslims.

Some commercially-controlled media report on "terrorism" almost as if the word were synonymous with "Islamic terrorism". Laws and government documents are usually very careful not to avoid any faith specific wording, but specific instances such as terror drills are less cautious about avoiding Islamophobic stereotypes.