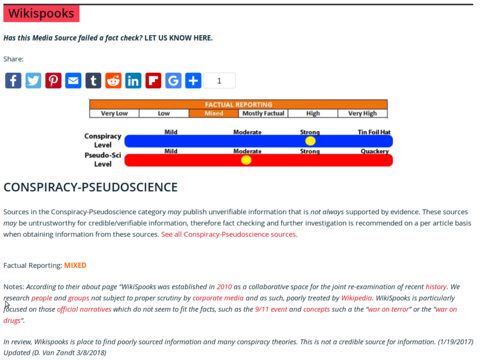 The MBFC take on Wikispooks as of December 2019


In its own words:
"Dedicated to educating the public on media bias and deceptive news practices"
Constitutes: “fact checker”

Media Bias/Fact Check (MBFC) is a "fact checker" which scores websites on "conspiracy level", "pseudo-sci level" and "left- or right wing bias", and by quality of factual reporting. MBFC has browser extensions for both Firefox and Chrome.

MBFC reports that it was started by Dave Van Zandt[1] in 2015[2] and has some volunteers who perform source research, writing and assist in fact checking. Van Zandt has a small internet footprint.[3]

The Atlantic Council have used data from MBFC.[citation needed] Researchers at the University of Michigan used MBFC to create the "Iffy Quotient", which draws data from Media Bias/Fact Check and NewsWhip to track "fake news" on social media.[4][5] The site was also used by a research group at the Massachusetts Institute of Technology in initial training of an AI to do "fact checking" and detect the bias of a website.[6] 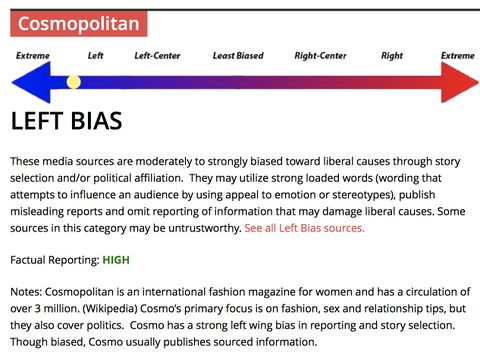 An image from the critical report by the Palmer Report

The Poynter Institute, itself recommended by MFBC, wrote that "Media Bias/Fact Check is a widely cited source for news stories and even studies about misinformation, despite the fact that its method is in no way scientific."[9]