Germanwings Flight 9525[1] was an international passenger flight from Barcelona–El Prat Airport in Spain to Düsseldorf Airport in Germany. The flight was operated by Germanwings, a low-cost carrier owned by the German airline Lufthansa. On 24 March 2015, the aircraft, an Airbus A320-211, crashed 100 km north-west of Nice in the French Alps. All 144 passengers and six crew members were killed.[2][3] 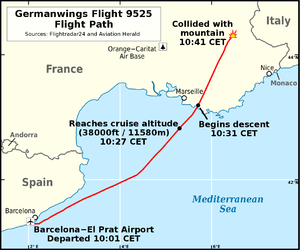 The crash was deliberately caused by the co-pilot, Andreas Lubitz, who had previously been treated for suicidal tendencies and declared "unfit to work" by his doctor. Lubitz kept this information from his employer and instead reported for duty. Shortly after reaching cruise altitude and while the captain was out of the cockpit, he locked the cockpit door and initiated a controlled descent that continued until the aircraft impacted a mountainside.

The official narrative was from the start disputed by Lubitz' family, who later hired aviation journalist Tim van Beveren to investigate. Also other aircraft experts were skeptical.[4]

Problems with the Official Narrative

The state attorney of Marseille, France, announced this 2 days after the crash, well before the flight data recorder (FDR) and most of other crucial evidence had been discovered and based only on a first listening to the cockpit voice recorder.[4]

The state attorney reported that breathing until impact could be heard on the cockpit voice recording, meaning the first officer was alive. After the aircraft was called by Air traffic control (ATC) several times without reply, ATC asked other aircraft to contact the A320, however also without reply. The recording taped alarms activated on board of the aircraft due to proximity to the ground, strong violent knocks were heard almost as if to open the cockpit door violently, but there was no Mayday call. However, it could not be determined whether the person present in the cockpit was conscious or not. Also this important detail was never communicated to the public. [4] 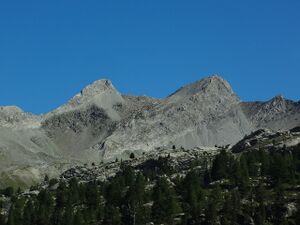 The Massif des Trois-Évêchés, where the crash site lies

In a number of following press conferences the states attorney of Marseille reported without a doubt that this was a suicidal mission in full intention and reasoned, that the speed of the aircraft changed frequently so the first officer must have adjusted the speeds.[4]

A problem with this narrative is that the "selected speed" entry can be updated by multiple sources, including automated sources e.g. during mode changes when present aircraft parameters are mirrored into the autopilot settings. The source of this parameter on the flight data recorder therefore is one of the many computers, which combines automatic and manual input sources, pre-processes such sources and then puts out the selected speed. The exact sources and the exact logic of the parameters recorded on the flight data recorder have yet to be explained by Airbus, the investigation however did not request such an explanation. This is a very important detail, which may impact several other issues.[4]

The flight data recorder shows, that exactly at the time when the final descent started at 09:30:53z, two modes in the autopilot's pitch channel became active, that were conflicting and technically impossible to be active at the same time. These conflicting modes remained active until impact with terrain at 09:41:06z. French Gendarmerie recognized this very fact and left according notes with the flight data recording (FDR) printout, they even contacted Airbus and asked the corporation, who confirmed these two modes were impossible to be active at the same time. However, no further investigation into this detail was conducted.[4]

This detail either means the FDR was receiving invalid data and therefore not only these particular data but a lot more data were in doubt and an in depth investigation was needed to determine which parameters were correct and which weren't, or if the autopilot indeed suffered a malfunction. It is even possible that the whole descent as well as the various modes and "selected speeds" were the result of the autopilot malfunction as well as the conflicting modes "fighting" with each other and no human intervention at all was needed to initiate that descent and outcome.

It remains unclear what autopilot response the activation of these conflicting modes would produce, this would be needed to be explained by Airbus, but such explanation was not requested. Hence it is inexplicable, why this very crucial conflict was never being looked into.

The states attorneys of Marseille and Düsseldorf as well as the German and French aircraft accident investigation bureaus all claimed from the beginning that the Lubitz was suffering from a depression, changing to mental disorder and psychotic symptoms as the investigation progressed, and even stated that he had been in hospital care to have the depression treated.

When Düsseldorf terminated all their investigations in December 2016, the closing decision stated that evidence has proven that the first officer did not suffer from a depression and was not under the influence of medication, drugs or other substances like alcohol. He had recently had a problem with his eyesight, but none of the medical experts including neurologists and psychiatrists the first officer had consulted in response to this problem, diagnosed any suicidal tendencies. This was never communicated to the public.[4]

In Tim van Beveren's investigation, the airplane flight certificate was put under scrutiny. It was unusual in several ways: it was issued the day before the crash, it was altered with handwritten changes, it had been due to expire in 11 days, it was extended for less than 1 year (contrary to rules), and the signature did not match the printed name. The irregularities with the certificate were never followed up in the investigation.[5]

Van Beveren also pointed out strange things in the evidence collection. When the German Criminal Police investigated the co-pilot’s dwelling, his partner was not present. Statements she supposedly made are not correct. They found one Ipad the first day they searched. They found a second one the next day. A third Ipad was turned over to the police by a third party AFTER the French police had announced that the plane was flown into the side of the mountain by a chronic depressive as a suicide act. The third Ipad is the one that had his Internet history of browsing for cockpit door info. These messages also came without the check numbers to tie them to the actual Ipad.[5][6]

Tim van Beveren, in his documentary film "Unfiltered"[7] points to a phenomenon known as “Aerotoxic Syndrome", called the air industry’s “dirty little secret.” The air breathed aboard most flight comes straight and unfiltered out of the jet engines and this air contains low levels of toxic compounds, similar to nerve agents such as Sarin. Internal documents and industry studies, obtained by insiders and whistleblowers, reveal that the problem of contaminated cabin air has become a growing concern for almost all airlines and all makes and models of aircraft.[8]

The EU had a program called SOFIA (safe automatic flight back and landing of aircraft), a "response to the challenge of developing concepts and techniques enabling the safe and automatic return to ground in the event of hostile actions". SOFIA will take the control of the aircraft and will manage to safely return it to ground under a security emergency (e.g. hijacking), disabling the control and command of the aircraft from the cockpit. This means to create and execute a new flight plan towards a secure airport and landing the aircraft at it. The flight plan can be generated in ground (ATC), or in a military airplane and transmitted to the aircraft, or created autonomously at the flight reconfiguration function.[9][10]