A deep state is a network of individuals and groups which are in de facto charge of a national government, and which use the democratically elected government as a front, providing plausible deniability and allowing covert control. On matters of deep political importance, the public machinery of government is routinely subverted on the say so of deep politicians.

Not to be confused with the Supranational Deep State, a.k.a. The Deep State, the informal working coalition of deep state groups.

The deep state (loosely synonymous with the shadow government[1][2][3], or more rarely permanent government[4] or permanent state[5]) is in contrast to the public structures which appear to be directing individual nation states. It is an intensely secretive, informal, fluid network of deep politicians whose deep state factions effectively amplify their influence over national governments.

The phrase "deep state" derives from the Turkish "derin devlet". It emerged after the 1996 Susurluk car crash unmasked the Turkish deep state. Back in the 2000s[6] and early 2010s[7], it was used by only a few commentators, sometimes within quotation marks.[8] It experienced a surge of use in 2017, often not in keeping with the meaning attributed by the diplomat who coined the phrase.

The official narrative of deep states used to be that they were "conspiracy theory". This position was modified in the last few years to the claim that they don't exist here. In 2013 the New York Times defined the deep state as "a hard-to-perceive level of government or super-control that exists regardless of elections and that may thwart popular movements or radical change. Some have said that Egypt is being manipulated by its deep state."[9] Since the Times (like the rest of the commercially-controlled media) is more or less a under the control of the deep state, such a mention is very interesting. The implication of the second half of their definition is clear:- countries other than Egypt are not being manipulated by a deep state. A 2012 blog post at the World Bank is clearer still:- "You think your country has undergone a transition to democracy... You realize that there are powerful elite formations bequeathed by years, even decades, of authoritarian rule still able to block progressive change and protect their interests." The statement that "deep states that exist in many youngish ‘democracies’" avoids discussion of nation states which have long claimed to be democracies.[10]. A 2013 book entitled "Deep State" would soften the term, making no mention of false flag attacks and bemoaning 9-11 "conspiracy theorists".[11]

The phrase "deep state" experienced a huge rise in usage after the election of Donald Trump. In March 2017, in particular, corporate media outlets all seemed to be offering contradictory ideas about what the term might mean, some denying its applicability to the US (arguing that "There is no American Deep State... it just looks like there is")[12] others suggesting that it's synonymous with "civil service",[13] or even contradicting the original meaning by suggesting it was politically partisan.[14] This is an interesting development given the mound of evidence that the deep state controls corporate media. 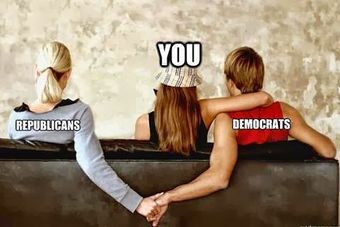 Since the early 19th and particularly in the 20th century, deep states in many nation states have worked to maintain a cover of party politics, focusing on personalities of individual politicians or issue of identity politics.

“Although elected representatives are supposed to be the ruling power we see them coming and going while the true powers in our lives — political parties, bureaucracies, business corporations, the media, institutions of law and justice, quangos, international treaty agreements, financial systems, regulators etcetera — get on with business.”
Ivo Mosley (2013)  [15]

This façade was by and large successful at hiding the real business of deep politics from public scrutiny. In the 21st century, in spite of massive consolidation of corporate media, this veil is proving increasingly thin as deep state milieux, formerly only the stuff of rumour, are now increasingly well documented with photos, videos and leaked documents all online.

The core of deep state groups and deep state milieu could be summarised by Dwight Eisenhower's "Military-industrial-congressional complex", although intelligence agencies are essential to their functioning. They are made up of the real leadership - note that an organisation's de facto leaders may well different from its de jure leaders (especially a regards spooks where compartmentalization and a culture of secrecy facilitate such duplicity, and high ranking officials may be retained as patsies, 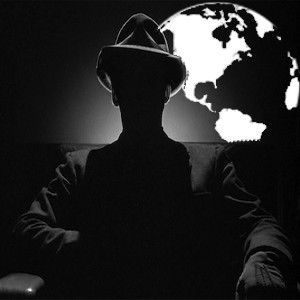 Deep states often evolved as secret cabals to control particular nation states. However, although originating in particular localities, the corruption of governments has globalised as have other enterprises, resulting in an ever wider interlocking of deep state factions in the 21st century.[17] A 2010 paper by Peter Dale Scott refers to "A Supranational Deep State", noting how their international integration effectively allows deep states to evade even the limited control national governments had in the early 20th century.[18] Post 9-11, most deep state groups are members of an informal alliance known on this website as the Supranational Deep State. The need for secrecy has lead to extreme compartmentalisation, promotes infighting and hampers its effective control any of the deep state groups which make it up,[19] possibly driving the 2020 lurch towards a global control grid with strict technological controls on freedom of speech and freedom of movement. 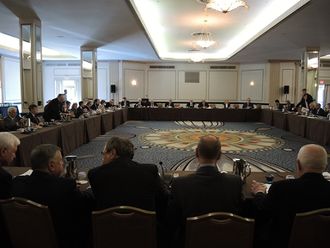 Deep state milieux, such as the (formerly very secret) Bilderberg group are organs of the deep state, places where deep state operatives can meet up, away from public scrutiny, and make plans. This is not to say that all visitors to such groups are members of, or even cognisant of, deep state operations; such groups also provide a place where potential members can be subject to evaluation — 1957 of the 2993 visitors to the Bilderberg only visited once.

Power relations between deep politicians remain fluid, so deep states should not be be seen as alternative power structures to the visible organisational structures which they dominate. Relationships between Mafia families offer a suitable parallel, combining an often uneasy cooperation with occasional violent and sudden change. All deep state groups share share a common interest in preventing exposure of the real goings on behind the facade of electoral politics, so even violently opposed factions can cooperate to hide the true nature of deep events. 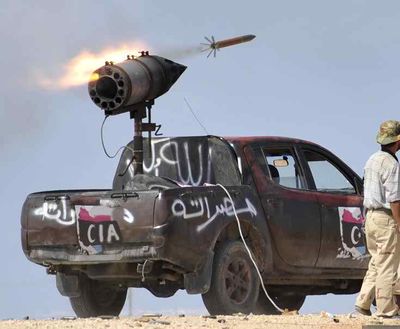 In 1977, deep state operative Edwin Wilson sold about 20,000 kg of plastic explosives to Libya, together with training in bomb making from US green berets. The report of the 1986 Bilderberg charged that "Libya is the principal sponsor of terrorism. It finances terrorist acts, it trains terrorist groups, it supplies arms, ammunition, passports and other documents to terrorists, and it uses its embassies, so-called peoples' bureaus, as weapons storehouses and sanctuaries for terrorists. Recently, Libya has been escalating its involvement in terrorism."

Deep states are probably dominated by psychopaths and sociopaths. To preserve their power, they must not only stay in the shadows, but frustrate radical and progressive social change. Control of corporate media is essential to the effective operation of the deep state. In the US this is effected through deep state control of the CIA, which has huge influence over big media.[20] With the apparatus of nation states under their control, their subterfuges can be elaborate and complex. Like Mafia families, deep state groups have a common interest in hiding their existence at all costs, leading to cooperation in times of crisis. As a Turkish cartoon put it in 1997 "Deep state protects its own."[21]

"Deep Politics" is a term coined by Peter Dale Scott to describe the activities and issues of importance to the agents of the deep state. These may be only indirectly seen as connected to "politics"; in most countries of the world today, party politics is more or less used as a veneer to obscure the real considerations. In contrast to multiple levels of publicly aired political considerations, deep political motives are sometimes much simpler; Charlotte Denett, for example, suggests that the deep politics of WW1 and WW2 actually centered on control of the Middle East's resources of oil and natural gas.[22]

The defining structural deep events of the late 20th century was the JFK Assassination, a coup d'etat that radically changed the US political scene.[23] which the establishment presented it to US citizens as the work of a "lone nut".

The defining structural deep event of the 21st century was the 9/11 attacks, which the perpetual war known as the "War on Terror". Details such as Larry Silverstein's multi-billion dollar windfall and the insider trading are widely known, but evidence is accumulating that these were but minor parts of much larger suite of financial frauds carried out by deep political insiders who capitalised on the opportunity.[24][25]

In 2021 Peter Koenig headlined an article The Covid Deep State: Threats, Vaccine Injuries and Deaths Abound No Compensation. No Justice. He introduces the article by explaining that “What can now be called “Covid Deep State” – the same “superior and super-rich elite” buys practically all the mainstream media – television, radio and print – in basically all the 193 UN member countries. Looks like there is no escape. That’s what they would like. That’s why the entire world had to be locked down for the virus at once on or around the 15th of March 2020.” [26]

The second series of Douglas Adams' Hitchhiker's Guide To The Galaxy concludes with the protagonists having finally located the ruler of the universe (a.k.a. the "man in the shack") who makes the real decisions that are ascribed to the President of The Galaxy. The posthumously produced series three of the radio series (produced after Adams' death) diffuses this plot by suggesting that this was a psychotic episode. In the (later) radio adaptation Trillian describes the idea of the secret ruler of the universe as a "conspiracy theory".

A Deep state victim on Wikispooks