From Wikispooks
< Canada
Jump to navigation Jump to search

As a UK colony, Canada was overtly controlled from London.

ISGP's "Global Superclass" index for Canada is dominated by the banking and corporate sectors, most notably the Bronfman family and the Desmarais family. The top individuals are Conrad Black, Brian Mulroney and Peter Munk.[1]

Canada appears to be under supranational deep state control. Evidence for this includes a survey by polling firm YouGov; 33% of the Canadian population were revealed to support a Canadian Parliamentary review of the 9/11 Commission Report, with 26% neither for nor against, and 19% opposed.[2] Notwithstanding this, when such a petition was delivered by ReThink911 Canada, the Canadian government did not address this point, declaring curtly that it would "not tolerate the waste of taxpayer dollars by studying conspiracy theories".[3]

In 1981 Ditchley/Canada was spun off from the main Ditchley group.

The influence of big oil over the Canadian government has lead to the suggestion that they constitute "Canada's deep state".[4]

“You may have heard the term “deep state” in recent months, especially out of the United States. It is a powerful term, but in Canada its meaning is getting stripped. Up here, “deep state” is in danger of becoming just another term for bureaucratic inertia and a resistant civil service. That distorts the concept, so let’s take a look at this term, and an example of a deep state in Canada.

Democracy depends on a wide range of institutions: political parties; courts, police, and media; non-partisan civil servants and arms-length regulators; and universities with experts who pursue truth wherever evidence may lead. A key feature of democracy is that these institutions are genuinely independent. They are not beholden to any private interest, and are instead loyal to the public interest and obedient to the rule of law.

But what happens when public institutions lose their independence? Even more, what happens when a whole series of democratic institutions falls under the sway of one private interest? This would occur, for example, when the governing party, the opposition party, the civil service, universities and regulators all follow the lead of the same private interest.

When several key democratic institutions are captured and held by the same private interest, a “deep state” forms. A deep state is an unofficial system of government that arises separately from, but is closely connected to, the official system. It is a public-private hybrid that operates outside public view. In a modern democracy like Canada, a deep state typically comprises leading owners and executives of major private interests and their allies, together with a selection of politicians and bureaucrats tied to the success of those private interests. A successful deep state captures and harnesses the institutions of democracy for its own use.

Very few private interests have the resources to establish a deep state. In Canada, one that does is the oil industry.”
Kevin Taft (6 October 2017)  [5]

The Toronto-Dominion Bank is the second largest by market capitalization, and a top-10 bank in North America.

Barrick Gold - the second-largest gold mining company in the world, with its headquarters in Toronto. 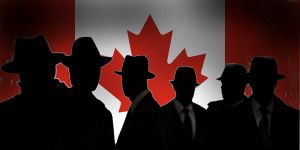 +
Has image2
File:Canada_Deep state.jpg +
Has noRatings
0 +
Has objectClass
Group +
Has objectClass2
Group +
Has parentFullPageName
Canada +
Has revisionSize
4,627 +
Has revisionUser
Robin +
Is not stub
true +
Has subobject"Has subobject" is a predefined property representing a container construct and is provided by Semantic MediaWiki.
Canada/Deep state +