From Wikispooks
< Switzerland
Jump to navigation Jump to search

Switzerland is the centre for many international deep state activities. In addition, its own deep state keep control over the country.

Nominally having one of the most democratic forms of government in the world, Switzerland is in fact run by a network of a few dozen very rich families who control the large Swiss companies. [citation needed] This control has been diluted since the event of globalization, especially since its acceleration in the 1990s. 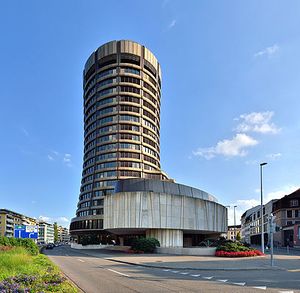 Switzerland is home to some of the largest global companies, with one of the highest concentrations of Fortune 500 companies.[1] The Swiss deep state will defend the interests of these corporations, by persecuting whistleblowers.

The Rive-Reine-Conference is a secretive elite get-together arranged by the multinational corporation Nestlé.

Switzerland joined a partnership with NATO in 1996, the so -called "Partnership for Peace"; Since 2018, the Swiss intelligence service (NDB) has also been managed by a general close to NATO.[2]

For decades the Swiss services have done extensive monitoring and screening of dissidents.[citation needed]

During the Cold War, Switzerland had a stay-behind network. 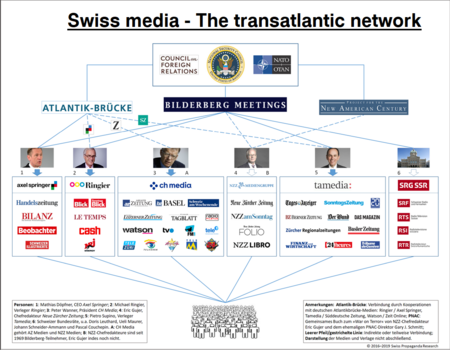 The CEO of the NZZ media group, Felix R. Graf, and the former SRG general director, Roger de Weck, are both Young Global Leaders of the World Economic Forum (WEF). SRF moderator Arthur Honegger as well as the NZZ correspondents Niklaus Nuspliger and Marie-Astrid Langer are Young Leaders of the American Swiss Foundation.[2]

Many department editors and correspondents for the NZZ have attended Bilderberg conferences. Also people from the state-owned SRF TV and radio have attended.

Tamedia President Pietro Supino was appointed to the board of directors of the Italian group Editorial in April 2020, which includes La Repubblica and La Stampa, and which in turn was taken over by the investment company Exor, co-owner of the British Economist.

106 Swiss have visited the Bilderberg. Some Swiss citizens are known to have attended Le Cercle.