Edwin P. Wilson was an Operation 40 member and cabal member. Wilson officially left the CIA in 1971 for a job with the Office of Naval Intelligence's secret Task Force 157. His New York Times obituary termed him "The Spy Who Lived It Up", a reference to his huge profits from deep state arms deals and his ostentatious lifestyle.[1]

When arrested in 1982 and charged with selling weapons and explosives to Libya, he was hung out to dry by former CIA colleagues who denied all knowledge. Even after a document was found which proved that the CIA men were all lying, it took years until he was released.

Wilson had a lot of businesses, many of them front companies, but also many real companies. "His preferred habitat was a hall of mirrors. His business empire existed as a cover for espionage, but it also made him a lot of money."[2] In the 1970s, he met with another CIA spook who was later to surpass him in infamy, Michael Jon Hand.

Edward Cutolo testified that Edwin Wilson was present at a lot of CIA drug deals in Panama and that he was also aware of other arenas of deep state drug trafficking.[3]

In 1974 the Nugan Hand Bank got involved in helping the CIA to take part in covert arms deals with contacts within Angola. Two CIA agents based in Indonesia, James Hawes and Robert Moore, called on Wilson at his World Marine offices to discuss "an African arms deal". Later, Bernie Houghton arrived from Sydney to order ammunition and 3,000 weapons.

Dennis Schlachter, a World Marine employee whose evidence as a protected federal witness lead to Wilson's 1982 arrest, recalls chauffeuring Wilson and Hawes out to the agency’s headquarters in Langley while the two discussed using Nugan Hand Bank to finance the shipments, under the “cover of Task Force 157,” [10 million rounds of] ammunition, 3,000 weapons including machine guns, M-1s, carbines and others”. With an end-user’s certificate showing World Marine as the purchaser and an Australian company as the buyer, the arms left the United States from Boston for southern Africa in three separate shipments.[4]

The following year Houghton asked Wilson to arrange for World Marine to purchase a high-technology spy ship and sell it on to Iran. He had already sold on one such spy ship in 1973, for which he earned $500,000 commission.[5][6] 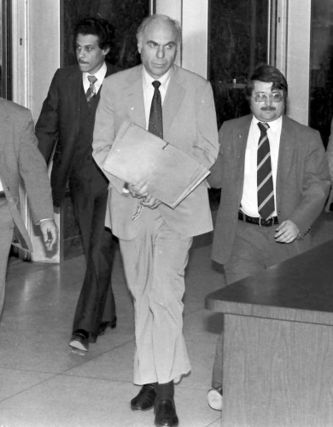 Wilson came to prominence when after years of investigations by the BATF, he was arrested for a litany of crimes, most notably selling 20 tonnes of C-4 (military grade) explosive to Muammar Gaddafi. This is an extraordinary amount - capable of downing perhaps 20,000 jumbo jets[7] - equal to the entire US stockpile. His defense was that these were CIA authorised deals. Wilson claimed that he continued to work for the CIA for free, out of patriotic duty, even "Shelling out his own money, earned through his various business deals, to gather intelligence."[8]

In 1983, the CIA's #3 operative, Charles A. Briggs produced the "Briggs affidavit" - a testimony that having searched all the CIA's records, there was no evidence that he was doing doing anything, directly of indirectly, for them. The jury found him guilty an hour after being read this affidavit on February 18, 1983.[1]

Three days after the trial ended, but before the sentencing, the government admitted internally that the Briggs affidavit was false. A CIA investigator drafted a memorandum that listed five solicitations and projects on which Wilson worked for the CIA after 1971.[9]

Although the government had already admitted internally that the Briggs affidavit was a lie, the guilty verdict was not publicly questioned, and so Wilson was sentenced to 17 years in prison and fined $145,000. No mention was made of this lie at the heart of the government's case for nearly 20 years, although innumerable CIA employees knew it to be false.[9]

Wilson was further indicted by a federal grand jury in the Southern District of New York on charges of plotting to kill the prosecutors and prosecution witnesses in the Virginia and Texas cases. Convicted in November 1983 he was sentenced to another 25 years in prison.[9]

Wilson's continued efforts to establish that he had CIA authorisation eventually established evidence that Briggs' affidavit was a complete fabrication - at least 80 meetings with CIA staff were recorded in their archives, not 0 as the government had tried to make out. In a forthright 24 page ruling, Judge Lynn Hughes described Wilson as "a part-time, informal government agent."[10] The conviction was overturned on February 6, 2004.

CIA given immunity from prosecution

Released, he filed a civil suit against 7 former federal prosecutors, 2 of whom had gone on to become federal judges, and against a past executive director of the CIA. On 29 March 2007, U.S. District Judge Lee Rosenthal dismissed his action, deeming that all 8 had immunity from prosecution for all of their actions in this regard. As Wilson's lawyer, Steve Berman, summarised it "There were lies told before, during and after his trial, and the judge [Lee Rosenthal] basically said, 'too bad.'"[11]

26 October 2016 Robin  An illustrative character who is not mentioned enough elsewhere
Edwin Wilson was just one more deep state spook, but exposure of his "Arms For Libya sheds useful light on the deep state. Note Wilson's close connections with other spooks, and his involvement in CIA drug dealing.