From Wikispooks
< Sweden
Jump to navigation Jump to search

“Nearing the end of my life, it was clear for me that our so-called democratic society is quiet around power, and loud where power is small or fictitious.”
Olof Lagercrantz [1]

The Swedish Deep state definitely involves the Wallenberg family and Wallenberg sphere, a deep state faction. It may in fact have been centered on them for many decades.

Although a country that prides itself on social equality, it has a small, but virulently reactionary section of the bourgeoisie, including the aristocracy, business leaders and in the military. The country's military-industrial complex includes arms companies such as Bofors, Saab, Kockums and Volvo Defense, which depend on exports to stay profitable. Of particular notice is the Wallenberg family, one of Europe's leading banking and industry dynasties, whose significance cannot be understated.

Another element is governing parts of the Social Democrat movement. With anti-communism as the pretext, it allied with other deep state actors and foreign intelligence agencies.

In 1856 André Oscar Wallenberg founded the Wallenberg Financial Empire in the form of the Stockholms Enskilda Bank. 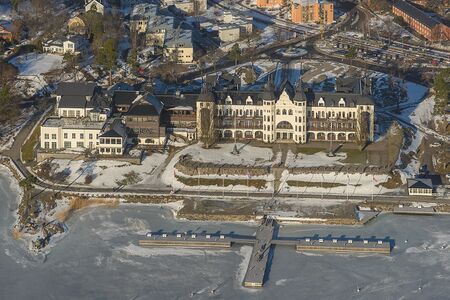 Grand Hotel Saltsjöbaden; built in the 1890s by the Wallenberg family, and a regular venue for Bilderberg Conferences.

The death of industrial tycoon Ivar Kreuger, officially a suicide but with the evidence pointing to assassination, allowed the Wallenberg family to aggressively pick up large parts of his business empire.

Sweden was neutral in WW2. Operation Gladio was probably established there around 1944/5 as it was in other countries across Europe. In 1948 the first Tylösand Summit took place, a very low profile set of meetings, which might be a local version of the Bilderberg group.

Rickard Sandler, Swedish Prime Minister from 1925-1926 attended the 1956 Bilderberg. Erik Boheman‎ was a Swedish diplomat what attended 4 Bilderbergs from 1958 to 1962. Marcus Wallenberg Jr., who helped create the Swedish Stay Behind network, attended the fifth Bilderberg in February 1957. He was later to attend multiple further meetings, as did his son and grandson.

Marcus Wallenberg Jr. attended all but 2 of the Bilderbergs of the 1960s. 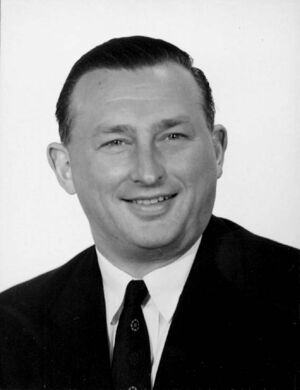 Marc "Boy-boy" Wallenberg, heir to the Wallenberg family leadership, who died after being bullied out of the family. It was ruled a suicide.

Marcus Wallenberg Jr. attended all Bilderbergs of the 1970s.

The IB-affair was exposed[How?][When?], where the Social Democratic Party had its own private intelligence service, cooperating with the government intelligence agencies, to spy on members of the unions, antiwar and peace movements, and weed out unwanted left wing elements. This surveillance would have been illegal if done by the government, hence the preference for a quasi-private solution. [2] IB also forwarded this information to the CIA. It is known that IB also did intelligence work abroad, especially against military targets in Arab countries like Egypt and against pro-Palestinian movements, information that was forwarded to the Israeli Mossad; and against Vietnam and antiwar-movements, information that was given to the US.

A psychological warfare campaign in the 1980s aimed to unseat the Social Democrat government under Olof Palme. Over a period of several years, US and NATO submarines penetrated Swedish territorial waters, with the intention of being observed. This campaign happened in collaboration with the Swedish admiralty, and created major embarrassment for the elected government.[3] This false flag method was used again briefly in 2014-15 as part of the drive towards the New Cold War. 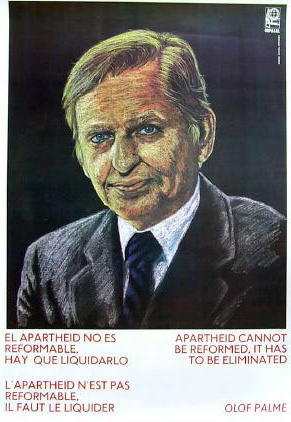 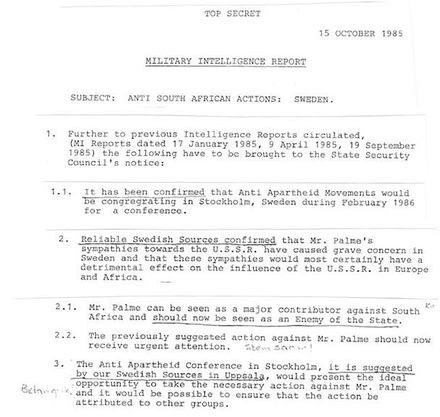 The Swedish Prime Minister, Olof Palme, was assassinated on 28 February 1986, 4½ months after a document alleged to be a SADF Military Intelligence report concluded that Palme "should be seen as an enemy of the [South African] State." UK television reported on the day that Swedish police "don't suspect a political motive... they think, it could be the work of a madman".[4] Ole Dammegård wrote in Coup d'etat in slow motion that "after Palme there were no Swedish global politics", that the country had been subsumed as an obedient member of the supranational deep state.

Deep politician Carl Bildt was Prime Minister of Sweden from 1991-1994.

In 1994 the sinking of the ferry M/S Estonia killed over 800 people. A scandalously inadequate investigation covered up and ignored countless investigative leads. Possible explanations include NATO or Russian submarines sinking it, a bomb onboard, a failed attempt to transfer contraband while in rough weather on the high seas, and insurance fraud.[5]

In 1995, two off-duty policemen from "Baseball-ligan", a right-wing milieu mentioned in connection with the assassination of Olof Palme, was discovered on the roof of the residence of Prime Minister Ingvar Carlsson. The next morning, Carlsson resigned for "health reasons".

The politician Anna Lindh was assassinated on 11 September 2003, in the run up to a Swedish referendum about EU membership, possibly by a "lone nut".

In 2018 Carl Bildt was exposed[6] as a confidential source of the US embassy. He was involved in many of the other events mentioned here, or in the investigation committees of them. Since retiring as Swedish PM, he has been active abroad serving US/NATO foreign policy objectives.

In contrast to the other European nation states, the Swedish government did not pass COVID legislation to institute a COVID Lockdown. This was very widely criticised as reckless and 'lax' by commercially-controlled media, even after it was praised by the WHO and after it became clear that such unfocused measures did very little to slow the spread of the virus. The commercially-controlled media very often compared if unfavourably with neighbouring Norway, Finland or Denmark rather than other locked down nation states such as the UK, Spain or Italy, which had higher death rates.[7]

In 2021 Tedros Ghebreyesus appointed Carl Bildt as WHO Special Envoy for the Access to COVID-19 Tools Accelerator.