Russ Baker is an investigative journalist and editor-in-chief of the research website WhoWhatWhy. He was an award-winning journalist, but prior to writing Family Of Secrets he had no great awareness of deep politics, although he once commented that "To some extent, I’ve always been a little bit suspicious of the surface narrative. I think that what has changed is my understanding of the profundity of the disconnect between what we’re told and the reality of what’s going on."[1]

After graduation from the Columbia School of Journalism, Baker worked as a metro reporter with Newsday in New York City.[1] In 1989, he became a New York correspondent for The Christian Science Monitor. He also wrote for the Village Voice in New York, producing cover stories on corruption in the police union,[3] the use of humanitarian international relief as cover for covert operations, and the displacement and destruction of small businesses in New York through massive commercial rent increases.

In the early 1990s, Baker served as a member of the adjunct faculty at the Columbia University Graduate School of Journalism. 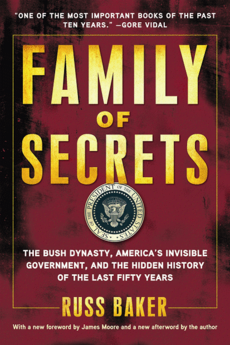 Russ Baker's magnum opus is Family Of Secrets, first published in 2009. When he started writing it in 2004, his initial goal was to discover how someone as unlikely as George W. Bush could have become US President.[4] In the course of several years of research, he gradually pieced together a sprawling backstory involving George H. W. Bush's career long involvement in the CIA, making the book a highly revealing read for anyone interested in understanding the US Deep State. Before writing it, Baker says, he shied away from investigating certain controversial topics, wary of being labeled a nut or a crackpot. But now, "the gloves are off",[1] although in 2016 he commented that the story about John Hinckley's family connection to the Bush Family was "story was so baffling and off-putting that... I.. did not mention it."[5] Mark Gorton cites as this book as a major influence on his groundbreaking Fifty Years of The Deep State.

Russ Baker founder and editor-in-chief of the crowd-funded non-profit website WhoWhatWhy, which aims to try to cover the shortfall in investigative journalism in USA. This is one of the foremost websites carrying out independent research into US deep politics.

A Document by Russ Baker