Not to be confused with "conspiracy theory", an enemy image used to try to rubbish ideas about high level corruption.

A conspiracy is a secret agreement among a group of people (termed "conspirators") to carry out a nefarious act.

Conspiracies, when groups of people secretly arrange to commit illegal acts, do happen. See this website for a large number of such events.

Within the terminology and framework of white-collar crime the topic is acceptable. Many conspiracies however, are steadfastly denied by the keepers of the official narrative, and are minimized with the pejorative "conspiracy theory". The word "conspiracy" by contrast is rarely applied to acts by establishment groups, even when it applies.

With or without conspirators?

Karel van Wolferen draws a distinction between conspiracies which are localised in time and space, with [identifiable] conspirators, and more nebulous, ingrained conspiracies, inseparable from a broad culture of systemic corruption. The latter he terms conspiracies without conspirators.[1] 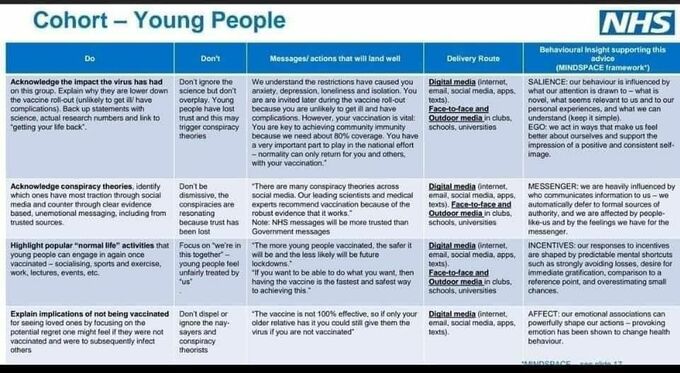 Leaked document appeared on Telegram in August 2021 showing how the NHS plans to dispel dangerous "conspiracy theories" to convince young people into getting the COVID vaccine.

CNN has used the word "Conspiracy" as an abbreviation for "Conspiracy theory", as for example in the headline Trump uses IG report to spread 'deep state' conspiracy. The single quotes around "deep state" reflect its ongoing refusal to admit the reality of the US deep state. Its equation of conspiracy with conspiracy theory, although grossly inaccurate, reflects corporate media policy as advised by the CIA memo Countering Criticism of the Warren Report, which encouraged its media assets to ridicule anyone questioning the good faith of the US government.[2]

During COVID, combating conspiracy theories has been a task of governments and public bodies to keep control of the official narrative.

Most of the deep events on Wikispooks are conspiracies - coordinated illegal acts with multiple perpetrators. All the False Flag Attacks and assassinations could be described as such, but the examples listed below are acts which aren't well described by other substantives.