Lofgren blames George W. Bush for inaction in the run up to September 11, 2001. Lofgren does not challenge the US government's official narrative of the events of 9/11, leading to a quite different view of the modus operandi and constitution of the deep state.[1]

Lofgren retired in May 2011, and in September 2011 he published an essay explaining why, entitled Goodbye to All That: Reflections of a GOP Operative Who Left the Cult on the website Truthout.[2] 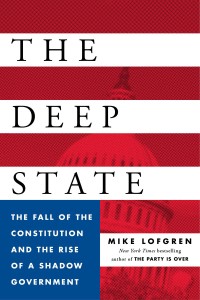 Mike Lofgren uses the phrase "deep state" to describe the focus of his research, which he terms “the big story of our time”.[3] He uses "the term to mean a hybrid association of elements of government and parts of top-level finance and industry that is effectively able to govern the United States without reference to the consent of the governed as expressed through the formal political process."[4]

Lofgren appears not to have confronted the reality of false flag attacks and be referring to an engorged military-industrial complex which has subverted the party politics, but he uses the term differently from Wikispooks, paying less attention to the control of commercially-controlled media and the pretense of the "war on terror". He has written that the Deep State's heart lies in Washington DC, but its tentacles reach out to Wall Street, which Lofgren describes as “the ultimate backstop to the whole operation.”[5] He is critical of bailouts.[1]

A Document by Mike Lofgren