From Wikispooks
< Romania
Jump to navigation Jump to search

The Romanian deep state received two large reboots in the 20th century. In 1945 when the Communist government took over from the monarchy. The other major change happened in 1989, when with the 1989 revolution against Nicolae Ceausescu and his government. Unlike in most other Eastern European countries, many Romanian deep state operatives from the security apparatus instigated and actively led the 1989 events, and these people have kept the real power ever since. 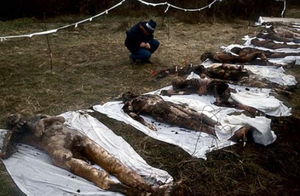 The 1989 Timisoara massacre was a false flag, where previously deceased from natural causes were dug up and presented as victims of government torture and massacres.

The 1989 revolution against Nicolae Ceausescu and the Communist government had a significant helping hand from abroad, as described by CIA officer Robert Baer and others. [1] Romania was one of the last communist governments in Eastern Europe to collapse. Capitalizing on popular discontent, the revolution seems to have been commandeered by people in the security apparatus, who have led the country since. To this day, the events are not fully understood.

Also the Hungarian and German ethnic minorities, long infiltrated by Western intelligence agencies, played a role in the uprising. Romanian President (2014-) of German ethnicity Klaus Iohannis is a client of the German state.[citation needed]

Noticeably, the revolution included a false massacre in Timisoara 1989, something that would have required professional staging. Presented as a massacre where 4,630 people died, the images of lines of bodies, broadcast around the world, turned out to have been people who died recently from other causes and had been dug up to be presented as victims of government torture.[2]

Ion Iliescu, the only known Romanian visitor to Le Cercle, was President of Romania again from 2000-2004.

Romania had a low uptake of COVID jabs.[citation needed]

"The question is to what extent the deep state of Romania is in control of the mockery of democracy ruled over by Klaus Iohannis since the Ceauşescu couple’s murder. If it is still the case that the deep state holds power, then Iohannis is probably close to his political end, with Covid-19 lighting the fuse."[3]