Sun-Ming "Sunny" Sheu was a computer expert[1] who was a victim of a real estate fraud. After the US legal process collaborated in the fraud, he uncovered that the responsible US judge, Joseph Golia, falsified his financial disclosure statements for several years. Sheu died on 26 June 2010 after being found in the street without consciousness. Suspicion about conflicting official accounts of his death was amplified after August 9th when a video was published on YouTube which Sheu had made "for the security concerns", in which he stated that if anything were to happen to him, it would be the work of "Judge Golia and his people".

Will Galison, a friend of Sunny Sheu, the leading researcher into Sunny's assassination, wrote in 2016 that: “The ultimate, terrifying moral of the Sunny Sheu story is this: If you are threatened with death by the police in the USA, there is no where you can go for protection, and after you are killed, there is no where your friends and loved ones can go for justice. That is why this story is of critical important to every American citizen.” [2]

Sheu, a computer specialist, emigrated from Taiwan to the USA and settled in New York City, buying a house in Queens, New York.[1] He refinanced his house in his brother's name in 2000 and in 2001 he was victim of a "straw buyer scam" which utilized a forged power of attorney to claim ownership of his property. This was seized and sold in 2005[3] after Sheu's mortgage broker, Roman Chiu, forged Sheu's brother's signature on a power of attorney and received a mortgage from Centex Home Equity for Sheu's home.[3][4]

In 2005 his house was seized fraudulently and sold for $1000 by the very person who was criminally prosecuted for stealing his identity in the first place, using another fraudulent name to accomplish this supposed “foreclosure-sale” to Centex.[5][3]. He started to investigate and uncovered evidence of fraud, and brought a case which was assigned to Justice Joseph Golia in the State Supreme Court of Queens. In spite of a lot of evidence, Justice Golia denied that any fraud had occurred. Early in 2009, Sheu walked into the office of the Black Star News and recounted to Publisher Milton Allimadi "the story of his ten-year struggle with corruption at every level of New York government".[6] 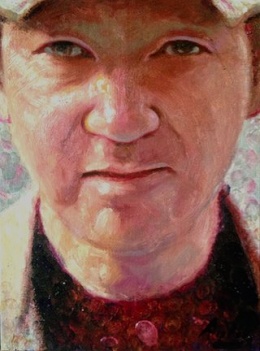 On January 14, 2009, Sheu was kidnapped and threatened, possibly by NYPD detectives Dominic DeGenaro and James Monaco. A detective told him that if he "went to the press or authorities... you live in a dangerous neighborhood with gangs and anything could happen to you." He interpreted this a direct threat to his life. On April 9, 2010 Sheu emailed Special Supervising Agent Rachel Rojas of the New York FBI, asking for witness protection. Rojas’ only reply: "Be careful".[7]

Sheu, Truthout writes, "a man of considerable education and discernment, wondered if Golia's blatant disregard of law in his own case indicated a more general propensity for corruption. He figured that if he could find evidence of other improprieties by Golia, perhaps he could force the judge off his case." Sheu used his computer skills to searched the internet for evidence of properties owned by Golia, and then took a list of these properties to the OCA Ethics Department to obtain Golia's financial disclosure forms.

The FBI, CCRB, the Attorney General and other authorities[8] all seem spookily uninterested in these multi million dollar discrepancies.[9] On Thursday, June 24, 2010 he announced that he had evidence sufficient to have Golia arrested.

Initial interest in Sunny's case arises from a short introductory video of him recorded by his friend Will Galison[10] and published on YouTube in 2010. A transcript is:

"Hi, my name is Sunny Sheu. I have filed a complaint to the FBI and the New York State Unified Court Ethics Committee about Judge Joseph Golia [who] falsified his financial disclosure statement. And I have submitted evidence to the FBI recently. [The] FBI sent me [a] copy of the evidence that I sent to the FBI.

So I make this recording for safety. For protection. If anything wrong please go to Judge Golia and his people. Thank you very much."[11]

On April 14th, 2010 Sunny Sheu and Will Galison went to see Senator Eric Schneiderman. Before the Q & A session, Schneiderman's PR man, James Freedland approached Galison and Sheu and asked them what they were intending to ask Schneiderman. Sheu explained that he wanted to ask the Senator what he could do about death threats he had received from two NYPD detectives on behalf of Supreme Court Judge Joseph Golia. Freedland told Sheu not to ask the question at the public meeting, and promised a personal meeting with Senator Schneiderman. This turned out to be a lie and the meeting was never offered.[12] 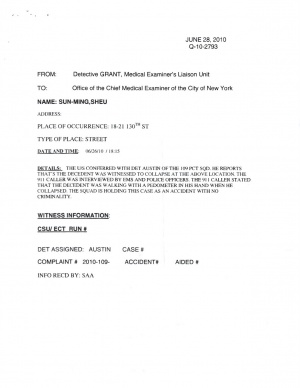 Two days after announcing to a friend "Now I've got enough evidence to put Golia in jail", Sunny was found in a fatal coma in the street. The authorities have made multiple incompatible statements, notably as regards the immediate cause of Sunny's death, whether there were witnesses and whether there was an investigation.[13]

The NYPD says there was no investigation because a witness who called 911 who "saw him fall" and that therefore no investigation was necessary. Even if a witness had claimed to see him fall – for which evidence has yet to be presented – a homicide investigation would still be required by law. But after nearly five years of FOIL requests for evidence about witnesses, the NYPD has not produced the name of the purported "witness" (which should be public information if no crime occurred) nor any police report mentioning a witness.[10] The Queens DA said that there was an investigation but that it was cancelled "because there were no witnesses".[citation needed]

Wikipedia had a page about Sunny, entitled Sun Ming Sheu. It was deleted on 13 February 2012.[14]

A letter from NYPD to the Medical Examiner gives the time of Sunny's death as 18:15, June 26, 2010, and claims that the NYPD is "holding this case as an accident with no criminality".[15] 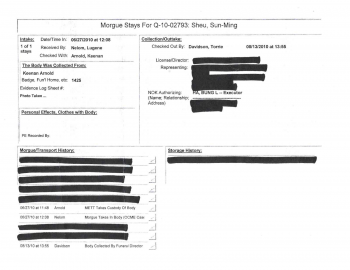 FOIA requests have uncovered that the NYPD arrived to remove the body and conclude (without an investigation?[citation needed]) that his death was natural.[16] In 2015 Sheu's friend Will Galison highlighted the following contradictions in the official narrative:

Under law, any death ruled "undetermined" by the Medical Examiner MUST be investigated by law enforcement, but Sunny's death was NEVER investigated. 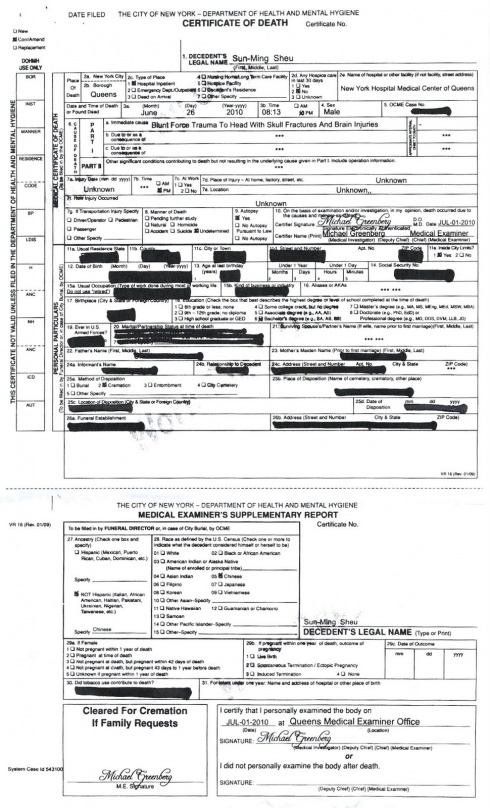 Dr. Zeeshan Ahmed, the ER doctor attending Sunny was recorded stating that there was "not a scratch on his head"[18] and insisting that he died from an internal aneurism,[10] and Detective Chris Austin of the 109th Precinct stated that there was "no head injury" and that Sheu died from "natural causes" - i.e. an aneurism. Their story has some inconsistencies and is contradicted by Michael Greenberg, the medical examiner who signed Sunny's death certificate. This declared his manner of death as "undetermined" (which under New York Law requires a criminal investigation)[citation needed], and noted an immediate cause was "Blunt Force Trauma to the Head, with skull fractures and brain injuries".[8][7][17][10]

The hospital has made conflicting statements about Zeeshan Ahmed.[19]

In 2017, a website published the text of letter from Edward Manfredonia, Financial Reporter, dated 11 July 2011. The text "will detail the past criminal activity of Sunny Sheu - criminal activity, which is known to Milton Allimadi, but which criminal activity Allimadi has chosen to ignore. In Allimadi’s series of articles there were several salient facts about Shue (Sheu) that Allimadi neglected to mention." He misspells the name of Sunny Sheu throughout the claim that "Shue had earned millions of dollars in export-import. And Shue (Sheu) had not paid taxes on this income."[20]

Another page alleges that "Milton Allimadi has lied about the death of Sunny Sheu- a topic, which he will discuss and lie about in his class. He has intentionally omitted unfavorable aspects of the life of Sunny Sheu." Manfredonia then details these "unfavourable aspects", which allegedly include being "an agent for the Chinese government." He also claims that "Sheu’s brother had the body cremated so that it could he could take it to Taiwan." The spelling "Sheu" is correct throughout this page.[21]

A number of interested parties have amplified the courageous efforts made my Sunny's friends and gradually raised the profile of his murder - which demonstrates just how controlled the big media actually are.

CopBlock headlined the murder of Sunny Sheu "the biggest NYPD scandal in decades"[22], while perhaps the definitive summary of the story is provided by Will Galison and Milton Allimadi. They summarised the importance of the case in a 2012 article for Truth-Out as follows: "The ramification of this case is that an American citizen can be killed and that law enforcement can simply neglect their responsibility to investigate the killing, thus failing both to serve justice and to deter future incidents. Protection by law enforcement and a criminal justice system is the most fundamental contract between a people and their government. Without security, all other rights and liberties are moot, so we employ our government to protect us from being robbed, injured or killed by anyone with the inclination to harm us."[6]

An online petition demanding a proper investigation into Sheu's premature death garnered over 1000 signatures in over a year.[23] The commercially-controlled media continued to show no interest in the case.

The persistence of Sunny's friends Will Galison and Milton Allimadi have been instrumental in the gradual exposure of Sunny Sheu's murder. Nearly two years after FOIA requests were made for tapes of the three 911 calls relating to his death, the NYPD finally made these tapes available.[29] They apparent to contradict the official note sent to the Medical Examiner by NYPD Detective Austin that "the 911 caller stated that the decedent was walking with a pedometer in his hand when he collapsed." None of the 3 witnesses mentioned seeing Sheu walking, all instead report finding him "lying on the ground". No documentation of any other interviews with the witnesses had been provided, despite numerous FOIA requests. None of the names of the witnesses have been supplied and all are redacted from the tapes, in violation of FOIL rules[citation needed].

Various public officials have made palpably disingenuous statements in an apparent effort to hide the murder of Sunny Sheu, leading to the suggestion that it was a government (or cabal) sponsored killing.[30] 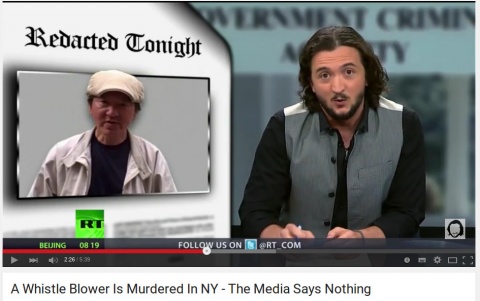 On Redacted Tonight in 2015

2015 saw an increase in attention paid on the internet to the case of Sunny Sheu, with several people blogging about the case and some postings on social media such as Reddit.[31]

In October 2015, William Gallison of Blackstar News filed a "Civilian Crime Report" about the case.[33] 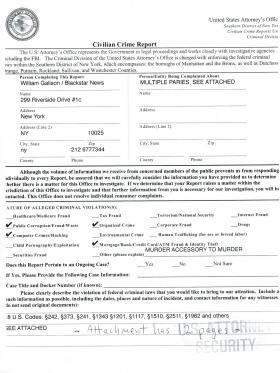 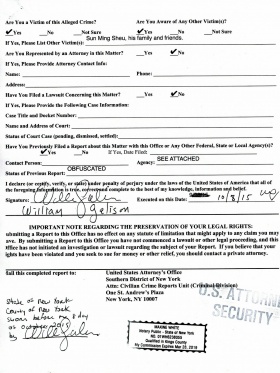 A Quote by Sunny Sheu

26 April 2016 Robin  A good summary of a hugely under-reported and ominous murder.
This page may be the clearest exposition on WWW of the fate of this courageous whistleblower.