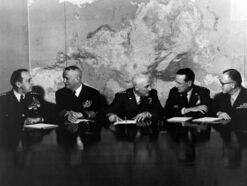 The Joint Chiefs of Staff (JCS) is the body of the most senior uniformed leaders within the United States Department of Defense, that advises the president of the United States, the secretary of defense, the Homeland Security Council and the National Security Council on military matters. The composition of the Joint Chiefs of Staff is defined by statute and consists of a chairman (CJCS), a vice chairman (VJCS), the service chiefs of the Army, Marine Corps, Navy, Air Force, Space Force, and the chief of the National Guard Bureau.[1][2]

JCS' first formal meeting was held on 9 February 1942, to coordinate operations between War and Navy Departments. With the end of World War II, the Joint Chiefs of Staff was officially established under the National Security Act of 1947. 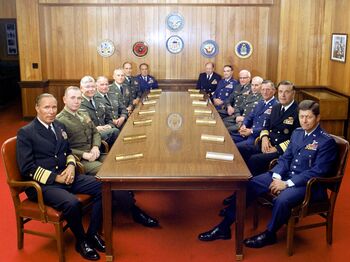 The Joint Chiefs of Staff and several combatant commanders gathered at the Pentagon on 1 July 1983.

A Document by Joint Chiefs of Staff

A document sourced from Joint Chiefs of Staff