From Wikispooks
< Hollywood
Jump to navigation Jump to search

Paedophilia among the famous is widespread in Hollywood, according to many allegations over the years.[1][2][3][4][5][6]

“I can tell you that the number one problem in Hollywood was and is and always will be pedophilia. That’s the biggest problem for children in this industry. It’s the big secret. I was surrounded by [pedophiles] when I was 14 years old. Literally. Didn’t even know it, until I was old enough to realize what they were and what they wanted... They were like vultures... There was a circle of older men that surrounded themselves around these groups of kids. And they all had power or connections to great power in the entertainment industry... There is a lot of good people in this industry, but there is also a lot of really, really sick and corrupt people... They have gotten away with it for so long that they feel they are above the law. And that’s got to change.”
Corey Feldman (2011)  [7]

As with the exposure of other VIPaedophile cases, the increasing exposure of the pedophilia business in Hollywood follows decades of innuendo and rumour. Since the 2015 move, An Open Secret, various insiders have testified to personally witnessing or being victims of rape as children.[8][9][10] 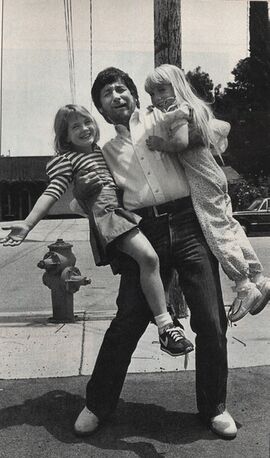 Steven Spielberg with Drew Barrymore and Heather O'Rourke, whom he discovered at Metro-Goldwyn-Mayer Studios[11]

In November 2017, on the Hollywood gossip website Crazy Days & Nights, someone with the shortcut "Ent Lawyer" posted a story about the circumstances that led to the death of Heather O'Rourke, at the age of 12 on February 1, 1988.[12][13][14] According to someone who was there the girl was raped and received severe injury which lead to her death. The official explanation about an unusual medical condition was a cover story and questioned by doctors who were interviewed for AP at the time.[15]

In 2013, Corey Feldman spoke about a Hollywood pedophile ring in an appearance on the talk show, The View. Corporate media were uninterested. His host, Barbara Walters, warned him that “You’re damaging an entire industry”.[6]

In 2014, An Open Secret documented cases of paedophilia in Hollywood. Amy Berg directed the movie, which "concerns a gang of paedophiles operating in Hollywood in the late Nineties, and alleges that a major child star was abused by a friend of X-Men director Bryan Singer."

Gabe Hoffman, the executive producer said that "I chose to independently finance the distribution in at least 20 cities, based on demand from theatre owners and the public like yourselves,” he said. "So it’s a grassroots groundswell against the larger companies, who, for whatever reason, have chosen not to buy it.”[16] Hoffman decided to make her film freely available on Vimeo, in order to “celebrate the brave women who have exposed Harvey [Weinstein].”[17]

Elijah Wood said that there was a "major" paedophilia problem in Hollywood.[18] A few days later, Corey Feldman spoke out against paedophilia,[19] reporting that groups of men repeatedly raped young stars and passed them "back and forth to each other". He added that the problem was getting steadily worse.[20]

In October 2017, The New York Times and The New Yorker reported that more than a dozen women had accused Harvey Weinstein of sexual harassment, assault or rape. Similarly to the exposure of Jimmy Saville, this began a flood of similar charges against him. 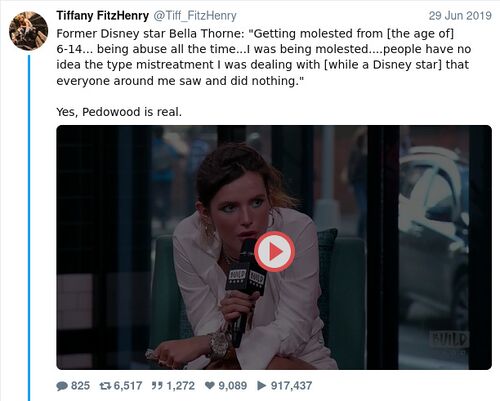 The Jeffrey Epstein Affair dramatically exposed the extent of organised paedophilia. In August The Wrap published a list of 79 Hollywood and Media Heavyweights Accused of Sexual Misconduct Since Harvey Weinstein.[21]

Sacha Baron Cohen filmed an interview with a concierge in Las Vegas stated he could find him an underage boy as a date. The FBI were uninterested.[22]

The Los Angeles Police was reported to investigate Corey Feldman's accusations in 2017. [23]