From Wikispooks
(Redirected from TV)
Jump to navigation Jump to search

Television was the first technology to allow images to be transmitted for remote viewing. It was quickly adopted by governments worldwide as an effective means of broadcasting.

Truthstream Media opines that TV consumption has over decades enforced an attitude in society where most of the people believe whatever the mainstream media tells them without critical analysis. Technical research from the 60s onward, into how different flickering frequencies, among other things, lead to different brain wave patterns that make people absorb information in an uncritical way, may have played a role in this if it has been applied on a wider scale.[2]

Television, through repetition of the same notion over and over again, enforces a worldview that on the political side assumes certain things and questions very little. The enforcing of this worldview starts at a young age through TV program for children and goes from there to cover all sections of society and all entertainment aspects (shows, movies, video games, etc). While critical content is produced, it is outweighed by those productions that enforce this worldview - which in general follows the line that America is fighting for what is right, not so much for it's own gain and empire. Domestic television productions around the world, especially in Europe, are generally concerned with other topics, but the outreach of Hollywood and the productions geared towards children, which are produced by the American entertainment complex, are factoring in as explained above. News reporting in Europe again, is very much in line to US foreign policy and overwhelmingly uncritical.

“I once said to the chair, the heads of the CIA, when I was prime minister, that if you want to advance regime change in Iran you don't have to go through the CIA cloak and dagger stuff. What you want to do is, is take very large, very strong transponders and just beam Melrose Place and Beverly Hills 2050 and all that, into, into Tehran and into Iran because that is subversive stuff. They watch with, the young kids watch it, the young people. They want to have the same nice clothes and the same houses and swimming pools and so on.”
Benjamin Netanyahu (12 September 2002)  [3]

The movie "The Delta Force" depicts a successful rescue attempt of American hostages from Iran. It is based on what the real operation Eagle Claw would have been, if it had been successful. Unlike the movie however, it ended before any firefight.[4] The operation is described and remembered as a debacle,[5] but the movie does not give a clue as to what really happened and the viewer is left with the impression of good American soldiers fighting Islamic "terrorism".

Talk shows are an effective way to shape public perception in general and communicate changes and developments in society that have been decided elsewhere.

CIA and MI5 have developed software to use televisions as surveillance tools.[6]

In the UK, television development was organised by the BBC , which was founded in 1922 under John Reith. 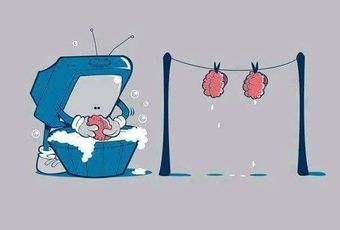 On average, US citizens spend about 5 hours/day watching television. John Whitehead suggests that they "are being programmed to accept the brutality, surveillance and dehumanizing treatment of the American police state as things happening to other people."[7]

Commentary from Howard Beale, a character in the 1976 film Network:[9]

"Edward George Ruddy died today! Edward George Ruddy was the Chairman of the Board of the Union Broadcasting Systems and he died at eleven o'clock this morning of a heart condition, and woe is us, we're in a lot of trouble! So, a rich little man with white hair died. What does that got to do with the price of rice, right? And why is that woe to us? Because you people and sixty-two million other Americans are listening to me right now. Because less than three percent of you people read books! Because less than fifteen percent of you read newspapers! Because the only truth you know is what you get over this tube! Right now, there is a whole, an entire generation that never knew anything that didn't come out of this tube! This tube is the Gospel, the ultimate revelation! This tube can make or break Presidents, Popes, Prime Ministers! This tube is the most awesome goddamn force in the whole godless world! And woe is us if it ever falls into the hands of the wrong people, and that's why woe is us that Edward George Ruddy died! Because this company is now in the hands of CCA, the Communication Corporation of America. There's a new chairman of the board, a man called Frank Hackett sitting in Mr. Ruddy's office on the 20th floor. And when the twelfth largest company in the world controls the most awesome goddamn propaganda force in the whole godless world, who knows what shit will be peddled for truth on this network?! So, you listen to me. Listen to me! Television is not the truth. Television's a goddamned amusement park! Television is a circus, a carnival, a traveling troupe of acrobats, storytellers, dancers, singers, jugglers, sideshow freaks, lion tamers, and football players. We're in the boredom-killing business! So if you want the truth, go to God! Go to your gurus! Go to yourselves! Because that's the only place you're ever gonna find any real truth! But man, you're never gonna get any truth from us. We'll tell you anything you wanna hear. We lie like hell. We'll tell you that, uh, Kojak always gets the killer, and that nobody ever gets cancer at Archie Bunker's house. And no matter how much trouble the hero is in, don't worry, just look at your watch, at the end of the hour he's gonna win. We'll tell you any shit you want to hear. We deal in illusions, man! None of it is true! But you people sit there day after day, night after night, all ages, colors, creeds. We're all you know! You're beginning to believe the illusions we're spinning here! You're beginning to think that the tube is reality and that your own lives are unreal! You do whatever the tube tells you, you dress like the tube, you eat like the tube, you raise your children like the tube. You even think like the tube. This is mass madness, you maniacs! In God's name, you people are the real thing! We are the illusion! So turn off your television sets! Turn them off now! Turn them off right now! Turn them off and leave them off! Turn them off right in the middle of this sentence I am speaking to you now! Turn them off!"[10]