The Good Club is a deep state milieu formed in 2009. Its members were 14 of the world's richest people, invited by Bill Gates "to save the world". The billionaires, reported The Times, "discussed joining forces to overcome political and religious obstacles" to the change they want implemented, which it summarised as a "bid to curb overpopulation"[1][2].

Interestingly, a decade later, virtually the same group of billionaires were involved in shaping the global COVID-19 deep event including the mandating of mRNA vaccines as a precursor to the World Economic Forum's "Great Reset".

The Good Club is an expression of philanthro-capitalism, or "Billanthropy" (after Bill Gates), a private gathering of friends and colleagues, who just happen to be the most powerful people in the world, "to share their history and excitement about their philanthropy. It was a group together discussing a range of things they are working on."[3]

The only known meeting was on May 5, 2009. It is not known if the 14 billionaires held more meetings, although The Guardian wrote "it is every indication is that they will".[4]

It was held at the residence of the Rockefeller University president, Sir Paul Nurse, on the campus of the Manhattan medical school.[5]

Each participant was given 15 minutes to propose how to best direct their charity given the global economic climate (in 2009).

It lasted about five hours, beginning in mid-afternoon and continuing through dinner, Patty Stonesifer, former CEO of the Bill & Melinda Gates Foundation, said.

"This particular group had never come together as a group before but many of the attendees had met in the past either individually or in smaller groups — but never all at once," she said. "This was a great discussion and they agreed to continue the dialogue and meet again in the future. There were a lot of good ideas."

The Giving Pledge association of over 200 billionaires is a direct continuation of this meeting.[citation needed]

What they talked about

The meeting - called by Bill Gates, Warren Buffett and David Rockefeller Jr - was held in response to the global economic downturn in 2009 and the numerous health and environmental crises that they want to fix the way they want it.

Over dinner after the presentation, the Times reported, they discussed how they might settle on an "umbrella cause" that could harness their interests.Taking their cue from Gates, a consensus emerged that they would back a strategy in which population growth would be tackled as a potentially disastrous environmental, social and industrial threat. "It was, in some ways, a summit to save the world."[6]

Most of these billionaires have a history of spending large sums of money on reducing population numbers and population growth. Several are quoted as proposing drastic population reductions.[7][8] 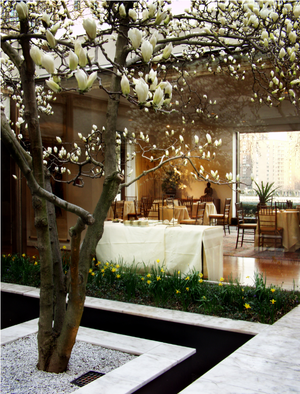 The session was so "discreet," the Sunday Times reports, that some of the billionaires' aides were told they were at "security briefings."

ABC News pointed out that "there remain as many questions about the meeting's details as there are about the logistics behind its organization. How did some of the world's most public figures coordinate their schedules, travel, and security with no one in media knowing about it?"[9]

A participant at the meeting said "they wanted to speak rich to rich without worrying anything they said would end up in the newspapers, painting them as an alternative world government."[10]

On April 25, 2009, the World Health Organization (WHO), headed by Margaret Chan, declared a Public Health Emergency of International Concern (PHEIC). A few weeks later, the Good Club met in New York City at the height of the H1N1 swine flu pandemic, which turned out to be a scam.

It is also worth noting that right at the start of the H1N1 crisis in April 2009, Professor Neil Ferguson of Imperial College London advised Bill Gates and the WHO: “40 percent of people in the UK could become infected [with H1N1] within the next six months if the country were affected by a pandemic." The same Neil Ferguson (who is generously endorsed by the Gates Foundation) designed the coronavirus lockdown model, which was released on March 11, 2020.

Philanthropy as a money-making scheme

The billionaires combined 'philanthropic' donations of many hundred billion dollars are more than most national budgets. Their money buys a friendly press, cooperative scientists, and compatible politicians. This huge power makes them able to reshape nations according to their will, forcing through structures such as private health care instead of public. Thus their whims and idees fixes totally overrides any democratic wishes.

The billionaires want to bypass democratic checks, and work "independent of government agencies", in the processing challenging what they scoff at as "some Third World politicians" who disagree with the population reduction plans.

Their pet health or scientific theories becomes dominant in the scientific community. Bill Gates have effectively bought control over the vast majority of the world's national and international health organizations.

The same billionaires then makes a business profit from their own 'philanthropy', through the solutions offered, which comes from companies they own.

In addition, these billionaires are a collection of crooks and swindlers. George Soros is a by-name for regime changes, Gates is a ruthless monopolist, and Warren Buffett for stock manipulation.