From Wikispooks
(Redirected from Racist)
Jump to navigation Jump to search

Racism is a slightly flexible concept, not least since there are no distinct 'races' of people in the scientific sense.

Racial discrimination is not acceptable and racist states such as the government of South Africa have been opposed by the (non-racist) international community. Explicit racism should not be tolerated (even to the point of impinging on free speech). Implicit racism based on economic or other means is however not a problem.

Institutions can be racist. Arrests for drug use in particular are disproportionately heavy for non-whites in many nations, such as UK and US. The "War on Drugs" has often been used as a hidden means of racist social control.

Racism has been exploited for millenia as a method to divide and conquer.[1]

“Chinese authorities, bolstered by technology, arbitrarily and indefinitely detaining Turkic Muslims in Xinjiang en masse for actions and behavior that are not crimes under Chinese law. And yet Chinese authorities continue to make wildly inaccurate claims that their “sophisticated” systems are keeping Xinjiang safe by “targeting” terrorists “with precision.””
(1 May 2019)  [3] 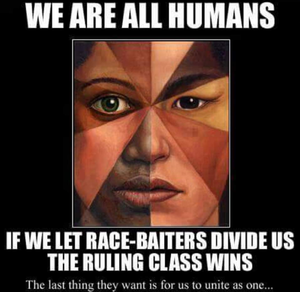