Deborah Palfrey operated Pamela Martin and Associates, an escort agency in Washington, D.C. that was used by some key 9-11 perpetrators. 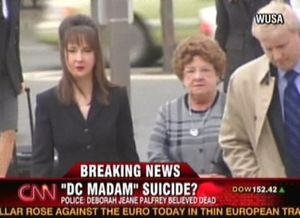 Officially, she committed suicide by hanging. Vanity Fair painted her as a troubled woman on the path to suicide, but others have suggested she was far from suicidal but instead was fearful about a contract being out on her life. Palfrey made at least four public statements that she would never commit suicide, and that if it appeared so, it would have been murder.[1] Mark Gorton lists her murder among the crimes of the US Deep state.[2]

A 2016 the US Supreme Court rejected a bid to release Deborah Palfrey's phone records, despite claims they were "very relevant" to the presidential election.[3]