Euthanasia is the practice of intentionally ending life, nominally to end pain and suffering.

Euthanasia is categorized in different ways, which include voluntary, non-voluntary, or involuntary:[1] 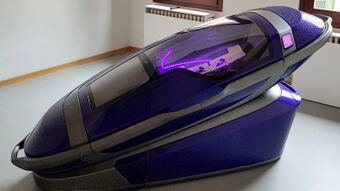 A capsule that induces hypoxia by reducing the oxygen to a critical level inside. Can be used the carry the body afterwards. The device was approved in Switzerland which has about 1,300 assisted deaths per year,[2][3][4] and also a comparatively high suicide rate.[5][6][7]

Spiked Online reported on the ‘advance directive implant’ (ADI) in July 2021. An implant that automatically triggers the release of a lethal drug at some stage after the onset of dementia. Once initiated, like a timer, it would begin ticking down towards zero.[8]

During the COVID-19 deep event, a number of governments, either through incompetence or on purpose, implemented policies that drastically increased death numbers.[9][10]

Canada adopted legislation in 2016 that allowed for euthanasia under the following conditions:[11][12]

In 2021 the law was adjusted, becoming "the world’s most liberal euthanasia law" - under which millions of Canadians would qualify.[13] By 2022 leading mainstream publications, like Forbes, linked the circumstances under which euthanasia is performed in Canada to Nazi Germany.[14] People who would otherwise receive assistance, like those who suffer depression, are now killed in a medical setting.[15][16][17]