A forum for discussion and working out of differences without using force, to:

John D. Rockefeller III, on behalf of his father donated 8,5 million USD for the purchase of the site of the UN building.[2][3] The Rockefeller Foundation also played an important role in the transition from the League of Nations to the United Nations.[4]

The two main organs of the UN are the UN Security Council and the UN General Assembly. The former has a smaller membership - 15 members only, including five permanent members (China, France, Russia, UK & USA / the P5). The permanent members have veto powers, and the security council's approval is needed for resolutions involving military force. 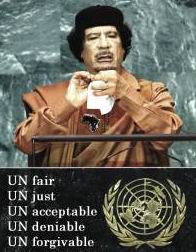 The United Nations is a thoroughly corrupted organisation probably beyond repair. For decades it has not been able to keep it's own peacekeeping forces in check and focused on their mission.[5] At headquarters cronyism and greed govern actions.[6][7] The Security Council debates have been called "a sham" and few governments even stay to hear. Non-permanent members have essentially been relegated to a role of rubber-stamping decisions made by the P5 or choosing between their contending positions.[8]

Matthew Russell Lee was banned from the UN for his very critical reporting on issues related to corruption within the institution.[9][10][11][12]

The United Nations and the Origins of "The Great Reset"

A Document by UN