In its first resolution on the question, the UN Security Council (UNSC), in 1969, recognised the termination of the Mandate, described the continued presence of South Africa as illegal, and called on South Africa to withdraw its administration immediately. In 1970, the UNSC declared for the first time that all acts taken by South Africa concerning Namibia after the termination of the mandate were "illegal and invalid". This view was upheld in 1971 by the ICJ. The Court stated that South Africa's presence was illegal, and that South Africa was under obligation to withdraw its administration. South Africa, however, continued to refuse to comply with the United Nations resolutions, and continued its illegal administration of Namibia, including the imposition of apartheid laws, the bantustanisation of the Territory, and the exploitation of its resources.

In 1968, the Council was renamed the United Nations Council for Namibia (UNCN), when the General Assembly proclaimed that, in accordance with the wishes of its people, the Territory would be thenceforth known as Namibia. Later that year, in the face of South Africa's refusal to accept the UNGA's decision and cooperate with the Council for Namibia, UNGA recommended that the Security Council take measures to enable UNCN to carry out its mandate.

The UNCN enacted in 1974 a Decree for the Protection of the Natural Resources of Namibia, under which no person or entity could search for, take or distribute any natural resources found in Namibia without the Council's permission. Any person or entity contravening the Decree could be held liable for damages by the future government of an independent Namibia. Also in 1974, the Council established the Institute for Namibia (UNIN), located in Lusaka, Zambia. The UNIN, which operated until after independence, provided Namibians with education and training equipping them to administer a free Namibia.

In 1976 the UN Security Council for the first time demanded that South Africa accept elections for the Territory under United Nations supervision and control. In the same year, the UNGA condemned South Africa for organising so-called constitutional talks at Windhoek, Namibia's capital, designed to perpetuate the colonial oppression and exploitation of Namibia. It decided that any independence talks must be between South Africa and the South West Africa People's Organisation (SWAPO), which UNGA recognised as the sole and authentic representative of the Namibian people. UNGA also launched a comprehensive assistance programme in support of Namibia's nationhood, involving assistance by United Nations organisations and specialised agencies.

In 1977, the UN General Assembly declared that South Africa's decision to annex Walvis Bay — Namibia's main port and vital economic avenue — was illegal, null and void and an act of colonial expansion. At a special session on Namibia in 1978, UNGA expressed support for the armed liberation struggle of Namibian people, and stated that any settlement must be arrived at with the agreement of SWAPO and within the framework of United Nations resolutions.[2]

In 1978, Canada, France, the Federal Republic of Germany, the United Kingdom and the United States submitted to the United Nations Security Council a proposal for settling the question of Namibia. According to the proposal, elections for a Constituent Assembly would be held under United Nations auspices. Every stage of the electoral process would be conducted to the satisfaction of a Special Representative for Namibia appointed by the Secretary-General.

The plan envisaged that a United Nations Transition Assistance Group would be at the disposal of the Special Representative to help him supervise the political process and to ensure that all parties observed all provisions of an agreed solution. The UNSC requested the Secretary-General to appoint a Special Representative for Namibia and to submit recommendations for implementing the settlement proposal. By UN Security Council Resolution 435 (1978), the UNSC endorsed the United Nations plan for Namibia and decided to establish UNTAG.

In 1980, South Africa accepted the plan proposed by the five Powers and in 1981 participated in a pre-implementation meeting at Geneva. However, South Africa did not agree to proceed towards a ceasefire, one of the conditions set by the United Nations for implementing UNSCR 435. Negotiations were again stalled when South Africa attached new conditions which the United Nations did not accept, in particular one which linked the independence of Namibia with the withdrawal of Cuban troops from Angola.

In the following years, the Secretary-General and his Special Representative travelled extensively throughout southern Africa, discussing problems, clarifying positions, exploring new concepts and exchanging views with all parties. Various countries promoted talks on the issue — among them the five Western sponsors of the 1978 proposal and Zambia.

The Secretary-General reported in 1987 that all outstanding issues relevant to the United Nations plan, including the choice of an electoral system, had been resolved. Only the condition linking independence to troop withdrawal remained an obstacle. In May 1988, US President Ronald Reagan and Mikhail Gorbachev met in Moscow and agreed that progress should be made. Following the Moscow summit, a quick succession of talks took place in London, New York, Geneva, Cairo, and Cape Verde aimed at a negotiated regional peace settlement for Southern Africa. The Congo's capital Brazzaville hosted the final round of negotiations culminating in a preliminary agreement pursuant to UN Security Council Resolution 435 of 1978 which called for the withdrawal of South African troops from Namibia. Known as the Brazzaville Protocol, this agreement also committed Cuba and South Africa to withdraw their troops from Angola, and was initialled on Tuesday 13 December 1988 by representatives of Angola, Cuba and South Africa.[3] Participants at the Brazzaville negotiations included South African Defence Minister Magnus Malan, Foreign Minister Pik Botha, Head of Military Intelligence General van Tonder, US Assistant Secretary of State for African Affairs Chester Crocker, French not-so-secret agent Jean-Yves Ollivier and Finland's Martti Ahtisaari.

The New York Accords (Tripartite Accord and Bipartite Accord), which gave effect to the Brazzaville Protocol, were scheduled to be signed the following week at UN headquarters in New York on Thursday 22 December 1988.[4]

United Nations Assistant Secretary-General and UN Commissioner for Namibia, Bernt Carlsson, who would have assumed control of the country until Namibia's first universal franchise elections had been held, was unable to attend the signing ceremony, being one of 259 passengers and crew killed when Pan Am Flight 103 crashed at Lockerbie on 21 December 1988.[5]

Following the UN Commissioner's death at Lockerbie, South African foreign minister Pik Botha went ahead and signed the Tripartite Accord on 22 December 1988. However, instead of handing control of Namibia to the United Nations, Pik Botha put the apartheid regime's Administrator-General, Louis Pienaar, in charge. No investigation by the Scottish Police, the CIA, the FBI or the United Nations has ever been conducted into the evident targeting of Bernt Carlsson on Pan Am Flight 103, despite the branding of apartheid South Africa as a "terrorist state" by Governor Michael Dukakis, Democratic nominee in the 1988 US presidential election campaign.[6]

The starting date for the implementation of Namibia's independence plan was 1 April 1989. UNTAG was made up of people of 124 nationalities. The authorised strength of its military component was 7,500 all ranks (maximum deployment 4,493 all ranks), supported by almost 2,000 international civilian and local staff. UNTAG's 1,500 police officers ensured a smooth electoral process and monitored the ceasefire between SWAPO and South African forces, and the withdrawal and demobilisation of all military forces in Namibia. During the elections, UNTAG was strengthened by some 1,000 additional international personnel who came specifically for the elections. 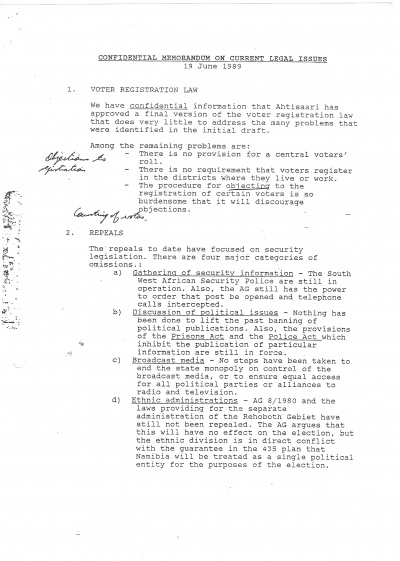 In his "Confidential Memorandum on Current Legal Issues" dated 19 June 1989, Anton Lubowski insisted that certain discriminatory laws had to be repealed before a fair election could proceed:

We have confidential information that Ahtisaari has approved a final version of the voter registration law that does very little to address the many problems that were identified in the initial draft.
Among the remaining problems are:

a. There is no provision for a central voters' roll;
b. There is no requirement that voters register in the districts where they live or work;
c. The procedure for Objections to Registration of certain voters is so burdensome that it will discourage objections; and,
d. Counting of votes.

The repeals to date have focused on security legislation. There are four major categories of omissions:

a. Gathering of security information - the South West African Security Police are still in operation. Also, the Administrator-General (Louis Pienaar) still has the power to order that the post be opened and telephone calls intercepted.
b. Discussion of political issues - Nothing has been done to lift the past banning of political publications. Also, the provisions of the Prisons Act and the Police Act which inhibit the publication of particular information are still in force.
c. Broadcast media - No steps have been taken to end the state monopoly on control of the broadcast media, or to ensure equal access for all political parties or alliances to radio and television.
d. Ethnic administrations - AG 8/1980 and the laws providing for the separate administration of the Rehoboth Gebiet have still not been repealed. The AG (Louis Pienaar) argues that this will have no effect on the election, but the ethnic division is in direct conflict with the guarantee in the UNSC resolution 435 plan that Namibia will be treated as a single political entity for the purposes of the election.

Namibia was divided into 23 electoral districts. Registration centres were set up all over the country. Some 2,200 rural registration points were covered by 110 mobile registration teams. Registration of voters began on 3 July 1989. When the process ended on 23 September, 701,483 Namibians had registered, and more than 34,000 had been helped to repatriate by the United Nations High Commissioner for Refugees — of some 41,000 registered with that agency.

The elections, held from 7 to 11 November 1989 to choose the 72 delegates to the Constituent Assembly, saw a voter turn-out of 97 per cent. UNTAG monitored the balloting and the counting of votes. On 14 November 1989, the Special Representative for Namibia Martti Ahtisaari declared that the elections had been free and fair. SWAPO obtained 41 Assembly seats, the Democratic Turnhalle Alliance obtained 21 seats and five smaller parties shared the remaining 10.

By 22 November 1989, South Africa's remaining troops had left Namibia. The Constituent Assembly met for the first time on 21 November to draft a new Constitution, which was unanimously approved on 9 February 1990. On 16 February 1990 the Assembly elected SWAPO leader Sam Nujoma as President of the Republic for a five-year term. Namibia became independent on 21 March 1990. On that day, in Windhoek, the United Nations Secretary-General administered the oath of office to Namibia's first President in a ceremony witnessed by Nelson Mandela, newly released from prison in South Africa.